Necrophagist will probably never rise from the crypt where they have entombed themselves, but they seem to have been reincarnated in a new Polish band named Depravity, whose debut demo New World Order we’re premiering today.

Depravity is the solo project of a musician who calls himself Exile (also a member of the Polish death metal band Sphere). He performs bass, guitar, and gruff growls on New World Order, with a guest vocal appearance by Mikołaj “Rlyeh” Naklicki of T.S.M.E.D. and a guest guitar solo on one of the tracks by Marcin Budaj of Rockasta. 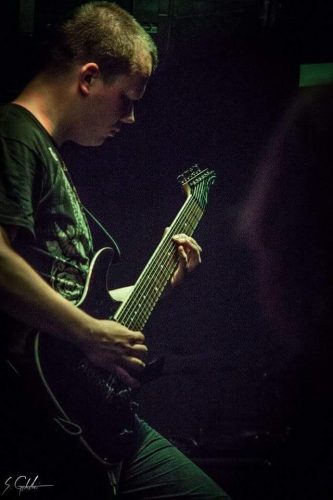 The three tracks on New World Order are a form of blazing technical death metal that’s over on the inhumanly brutal end of the spectrum. Anchored by a blindingly fast double-bass drive train, the songs provide showcases for an array of remorseless riffs that alternately swarm in a ravenous frenzy, skitter like crazed insectile creatures, and jab like jet-fueled pile-drivers.

While those forms of destructiveness are doing their best to lay waste to everything around them, Exile sets off fireworks with darting, flickering, shrieking guitar leads and bursts of piercing dissonance, along with scintillating soloing of his own.

Depravity gives attention to groove as well, including a militaristic head-hammering segment in “No Redemption” and a morbid, thuggish stomp to close out “Mortification”.

New World Order is a promising start. We’ll be keeping our eyes on Depravity to see what develops next.

Depravity has made this promo available for download at the following Bandcamp page:

And here’s an index to the songs from the EP that you’ll find on the YouTube player below (though we’ve also included the Bandcamp stream):

One Response to “AN NCS PREMIERE: DEPRAVITY — “NEW WORLD ORDER””