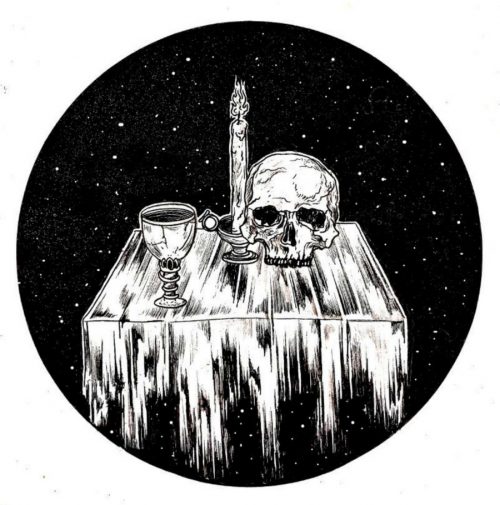 To celebrate the Winter Solstice today, the Minneapolis-based black metal band Astral Blood have just released the first single from their new album SYZYGY, which will be released in early 2017 by Throats Productions. The song’s name is “Free of My Scars” and it’s an irresistibly captivating track, one that’s both hauntingly atmospheric and electrifyingly vibrant.

SYZYGY is the band’s first full-length and follows the 2014 release of a self-titled EP. I started paying attention to the band when I learned that its line-up includes Joe Waller (ex-Amiensus, Adora Vivos, Sarasvati, Nuklear Frost) — who performed guitars, bass, drums, keyboards, and vocals on the new album — as well as vocalist/guitarist Andrew Rasmussen.

What you’re looking at above is the artwork for the single by Reuben Sawyer (Rainbath Visual), but also check out the wonderful cover art for the album by Jas Helena: 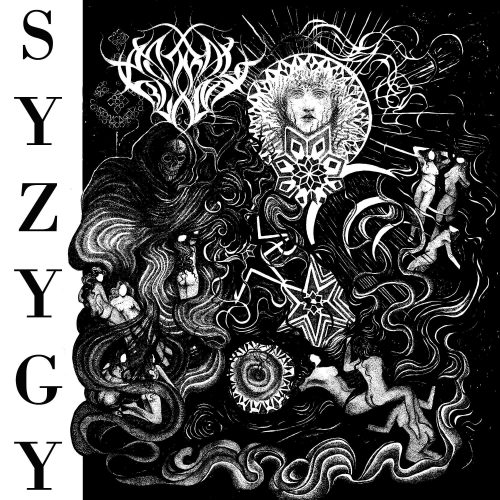 There’s a lot to like about this multifaceted and dynamic new single, including the ghostly piano notes and bleak ambient tones that open and close the song. In between those spectral, reflective moments you get music that’s even more enthralling, but dramatically more powerful.

In the first half of the track, the music is beleaguered and depressive in its atmosphere but still hauntingly beautiful. The tandem of harsh vocal expressions — scarring shrieks and deep, gruesome roars — provide a hint of the ferocity to come. Just past the mid-point, the riveting surge arrives, in an explosion of blasting drums, exhilarating riffing, and a sparkling guitar solo.

The music drives hard toward the finish, becoming white-hot in its fury while still preserving the spectral beauty of the song’s opening — and the reappearance of the piano in the midst of the maelstrom is an inspired touch.

As you can tell, I’m very high on this track. I’ve had it on repeat all morning, and have a feeling it will be a frequent companion through the dark winter days ahead. I hope you like it just as much.

SYZYGY will be released by Throats Productions in both a digipack CD edition and on 12″ vinyl. You can download the single via Bandcamp.

In other Astral Blood news, the band will be embarking on a short midwestern tour in March. The dates as they now look are below; for more details, keep a watch on Astral Blood’s Facebook page.

One Response to “AN NCS PREMIERE: ASTRAL BLOOD: “FREE OF MY SCARS””