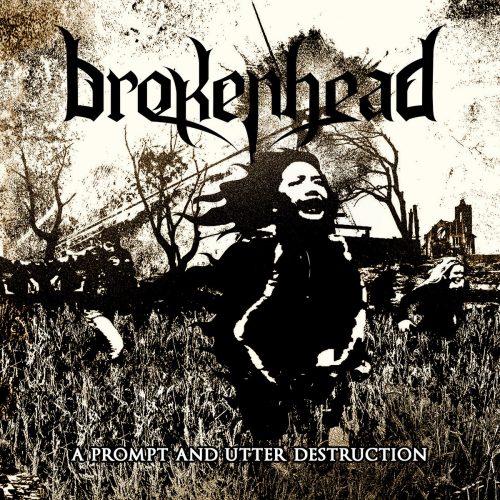 (TheMadIsraeli reviews the new EP by the Swiss band Brokenhead.)

It’s pretty hard to find thrash metal nowadays that isn’t obsessed with aping Vio-Lence or old Exodus. A lot of it’s boring, so boring that it’s completely inconsequential music. But thrash metal bands have produced some of my favorite metal records of all time, a good chunk of them in fact, and I’m always looking for a modern band to come out of nowhere and sock me in the jaw.

Brokenhead from Geneva, Switzerland, have released a debut EP named A Prompt And Utter Destruction that didn’t just sock me in the jaw, it kicked me in the balls afterward and left me leaning against a wall vomiting, attempting to recover in its aftermath.

If I were to give a point of comparison it would be to ask that you imagine what might happen if Testament decided to expound ever further on the sound they established on The Gathering,  instead of producing fairly generic thrash metal that fails to use the best elements of their legacy sound. The de-tuned guitars, double-bass intensive drums, gruff vocals, and swaggering air, combined with slightly proggy undertones, make what Brokenhead are selling something I’m definitely buying.

The riffs are so good on this album, and I’d argue that far and away, in all of metal, riffs make or break thrash. Everything here is so melodious, gritty, and dexterous. The fast-as-fuck technical  fretboard ballet going on during this EP, with that double-bass undercarriage, is undeniable. I don’t think any decent metalhead could say no to what’s going on here (apologies to the indecent among you).

Just the opener “Chronophobia” is a masterclass in precision surgery performed on a meth high, complete with odd time signatures. The main riff is so damned hooky I can’t get over it. Combine this with a potent vocal tone that merges the attitude and swagger of Testament’s own Chuck Billy with the grit and commanding presence of Vader’s own  Peter, and… well, this EP is just fucking good.

One Response to “BROKENHEAD: “A PROMPT AND UTTER DESTRUCTION””