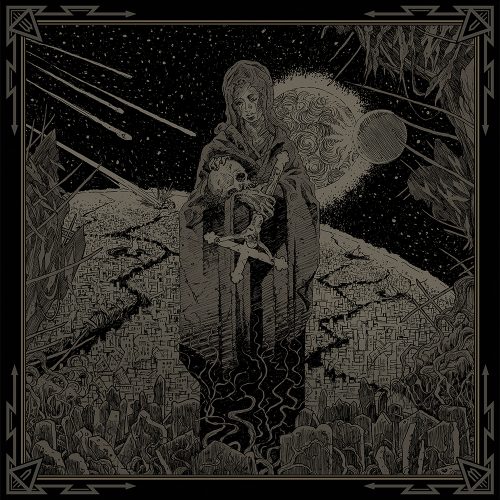 If you’re in dire need of a big wake-up call, you could jam a live power line down your throat or you could listen to this new split by the Polish barbarians in Witchmaster and Voidhanger. The effect would be pretty much the same either way.

The name of this electrifying barrage is Razing the Shrines of Optimism, and it’s set for release tomorrow (January 20) by Third Eye Temple. We’re delighted to bring you a full stream of all the audio murder today.

Both of these bands infuse their music with the poison of black metal, along with the energy of a power plant in overdrive, but as you’ll find out, their approaches to the task of firing up an audience follow different strategies. 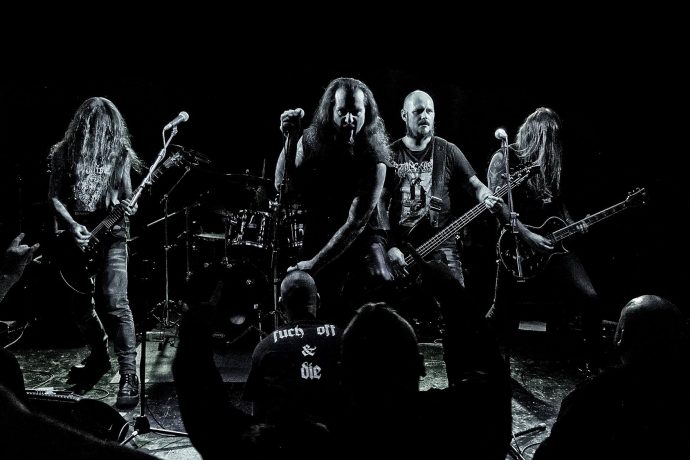 For those new to Witchmaster, they released their earliest demos in the ’90s, followed by five albums, the last of which was 2014’s Antichristus ex Utero. This new split features one new song (“Permafrost”), a cover of Einstürzende Neubauten’s “Tanz Debil”, and a non-stop torrent of three classic Witchmaster tracks performed live in Lisbon.

“Permafrost” is a turbocharged attack, launched by pummeling and booming drums and furiously feral riffing. It seethes with poisonous melody and features a ferocious combination of tyrannical growls and red-eyed snarls. And then it begins to thrash in equally electrifying fashion to the accompaniment of a burly bass bludgeoning.

“Tanz Debil” makes for a wonderful contrast to the opener. It’s a less frenzied and more rocking and pulsating track, the vocals turning to wild howls and soaring cries, with a flickering melody paired with a jagged, scraping riff as the backdrop. It’s a big, throbbing headbanger with an ominous atmosphere that gets its hooks in damned hard.

And then finally you come to those three torrential live tracks — “Tormentor Infernal”, “Morbid Death”, and “Satanic Metal Attack”. The sound is explosively vibrant, and the performances vividly reveal Witchmaster’s merciless capacity for whipping a crowd into a blood frenzy. 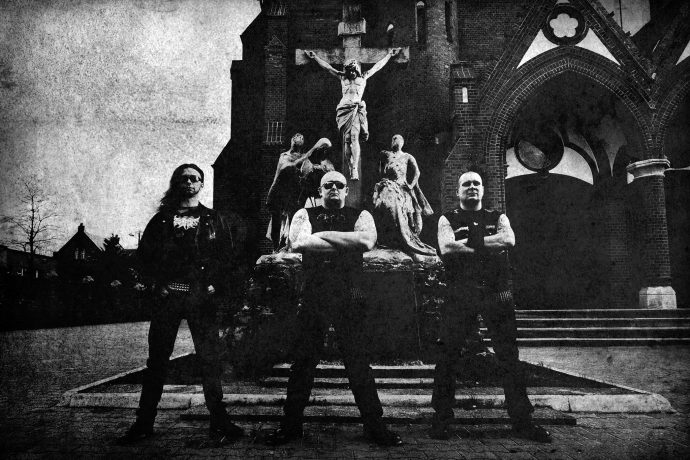 Voidhanger have released two full albums so far — Wrathprayers (2011) and Working Class Misanthropy (2013) — plus a 2012 EP (The Antagonist). On this split they contribute three new songs

The press material for these songs is pretty spot-on: “Imagine Celtic Frost’s groove combined with Sarcofago’s razor-sharp riffing with the savagery of Nails and you’ll have but an idea of Voidhanger’s newest effort.”

“Burnout Hearts Exhibition” begins with massive brute-force chugging, combined with a viper-like, slithering melody — and then it begins to brawl and rumble, the lyrics expelled from a harshly abraded throat in vile, enraged proclamations. It’s a melding of punk-like romping, pile-driver hammering, and sharp-edged scything that’s damned powerful. (A NSFW video of the song can be viewed here.)

And to finish, “Through The Holocaust of Optimism” is another punk-influenced piece of raw, rampaging mayhem with more jaw-dropping drumwork, blazing riffs, and vocals that sound like someone who really wants to tear your throat out and then beat you senseless before you bleed out. And after a slight pause just past the mid-point, the song hits a grim breakdown, stinking of sulfur, that’s a guaranteed headbang trigger.

The split features great cover art by Robert A. von Ritter Illustrations, with design and colours originated by Mentalporn. In addition, Ihasan art has contributed special calligraphy to this release.

Razing The Shrines of Optimism will be available in two editions, both with gatefold sleeves. There will be a regular edition (400 copies) plus a limited 12″ colored vinyl edition (100 pieces), and orders can be placed here:

5 Responses to “AN NCS PREMIERE: WITCHMASTER AND VOIDHANGER — “RAZING THE SHRINES OF OPTIMISM””