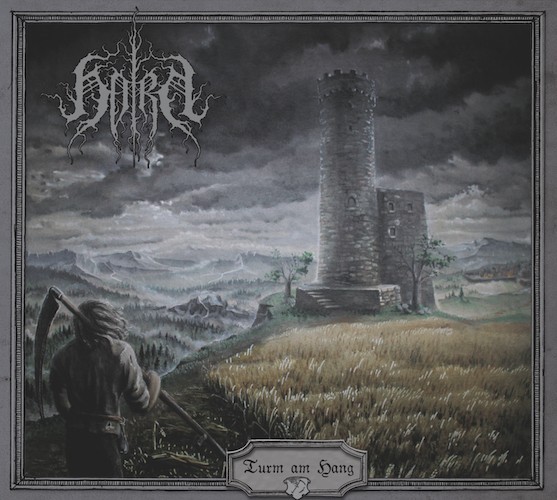 Turm am Hang is the new album by Germany’s Horn and it’s a unique experience. “Unique” is an overused and misused word, but here it’s not hyperbole. The album is so distinctive that it defies comparisons — as you’re about to discover for yourselves, because we’re presenting the premiere of a full album stream in advance of the record’s release on January 27.

The work of Horn’s lone creator Nerrath, Turm am Hang is Horn’s seventh album and, among the ones I’ve heard, the most successful. It was inspired by a variety of historical subjects, as well as by an appreciation for ancient valor and an animating spirit of tribalism. 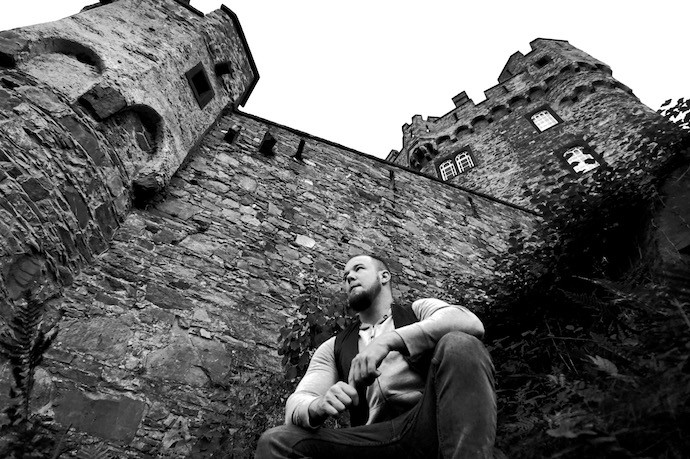 Every original song on the album is a marvel, each one of them intricately textured and dynamic in its movements and presented through a clean, powerful production that suits the strong vitality and vibrancy of the music. The drums boom, the bass has a big, gravelly tone, the riffs are heavy and jagged when they need to be, the guitar melodies shine like clarion calls and skirl like pipes, and Nerrath’s voice… well, I’ll come back to that.

As fans of Horn will expect, there is of course a folk influence in the rhythms and melodies of the songs, but please don’t think of this as “folk metal”. I’m afraid that term has connotations that might be misleading in the context of this album. The folk-influenced melodies on this album have the air of medieval classicism, and Nerrath does a consistently fascinating job of creating memorable melodic themes and then elaborating on them over the course of the song.

But this isn’t a sterile academic exercise. The melodies achieve a strong emotional response, and they’re also very catchy, as are the more folk-influenced, swinging rhythms that have the feel of dances. The melodies are also enmeshed in a changing framework of heavy metal (leaning more toward black metal than other genres) that adds a dimension of visceral power.

Nerrath’s voice is also a powerful instrument. His harsh, barbarous growls predominate, but that just makes the appearance of his singing voice all the more remarkable. He has impressive range, sending his voice arcing to the skies and sometimes layering it to achieve a dramatic choral effect. Usually, these different vocal styles appear separately from each other, but there are a couple of particularly striking moments during “Bastion, im Seegang tauber Fels” when he moves his voice seamlessly from a deep growl straight up like a rocket into a soaring clean-sung finish. 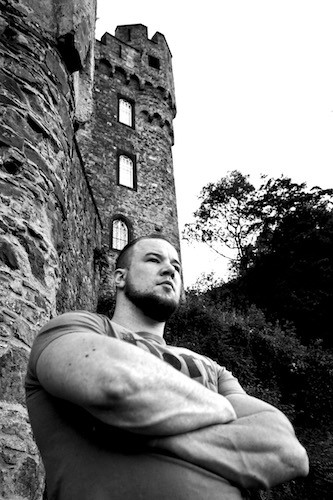 The song-writing is so good that moving through the album is like a journey of discovery, each track having its own personality, its own distinctive moods and musical textures.

The opener “Alles in einem Schnitt” is based on the 17th-century German folk song “Es ist ein Schnitter”. It’s a rumbling, bounding, galloping song with a mood that turns from bright to dark and sinister by the end, perhaps in keeping with the themes of the folk song that inspired it.

The title track, which seems to translate to “tower on the slope” and thus reveals the connection of Timon Kokott’s cover art, might be the most infectious song on the album, with a lilting guitar melody at the beginning that surges forward with the strength of the riffing.

Harmonized acoustic and electric-guitar strumming lend a somber yet vibrant air to “Verhallend in Landstrichen”, a song that also includes pounding drums that crack like gunshots and blasting intensity, while the opening guitar lead in “Die mit dem Bogen auf dem Kreuz” strikes right at the heart from the first seconds; the song moves from a slow marching pace to a heavy rocking rhythm to the blazing drive and power of black metal before it ends.

More twists and turns lie ahead. “Ä(h)renschnitter” begins in heavy, bombastic fashion and then gallops at a pulse-pounding pace with an air of warlike barbarism — but there’s a punk vibe in the song as well, along with a stirring mix of harsh, intimidating barks and clean choral voices.

There’s one instrumental interlude on the album that arrives well past the halfway point — “Lanz ind Spieß” (lance and spear) — and it’s an attention-grabber, composed of militaristic drum beats and reverberating guitar notes with a tone not found elsewhere on the album, sketching a grim and disorienting melody.

“Bastion, im Seegang tauber Fels” is another surprise. It includes a big, supremely headbangable riff that would be right at home in a classic heavy metal anthem, harnessed to a swirling, grim guitar melody and another guitar motif that pulses infectiously. It’ a dark song with a dreary overhang, but it’s also heart-swelling.

The album ends in brilliant fashion, with a faithful cover of “The Sky Has Not Always Been This Way” from the 2013 album Coven of the Wolves by Iowa-based When Bitter Spring Sleeps — and that band’s vocalist Lord Sardonyx makes a guest vocal appearance on the track as well. It’s the only song on the album with English lyrics, and the words seem to summon so much of the meaning and spirit conveyed through the music on the album (I’ve included the lyrics after the music player below). The beautifully sorrowful melody flows through the song like a dark river through a black forest, and the song reaches the level of a sweeping, epic saga.

Storm clouds hang over much of this album, in both its melancholy and its warlike moods, yet it’s a work that’s stirring and reverent as well, and one that has the kind of depth and character that beckons you back and stands up well to repeat listening. It comes highly recommended.

Below is our full music stream as well as a video that shows Timon Kokott’s creation of the album art on wood.

For more info about the album and how to get it, visit these places:

LYRICS: “THE SKY HAS NOT ALWAYS BEEN THIS WAY”

Oh how they rose
in grandeur and majesty!
But their magick was too strong
It dragged them down and they drowned
in their own greed for more
Their hunger for wisdom

Oh how they shone
in grandeur and majesty!
but their magick was too strong
it dragged them down and they drowned
in their own greed for more
and a future they’d never live to see