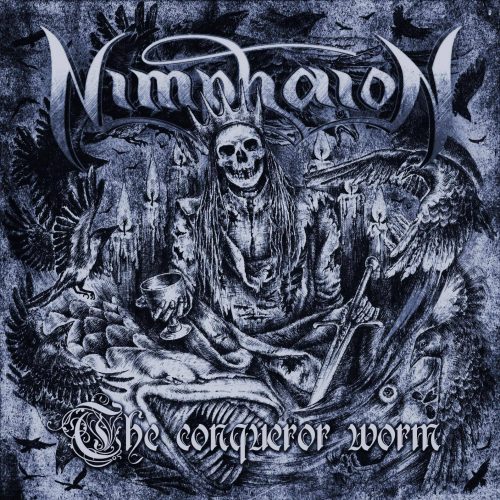 The Russian band Nimphaion are working on their third album, a conceptual creation named Quoth the Raven that’s projected for release in the coming spring. As a sign of what lies ahead, the band are releasing a single from the album, “The Conqueror Worm“, and today we’re sharing with you a stream of the title song in a lyric video.

Those of you familiar with the poetry of Edgar Allan Poe will have already realized where Nimphaion drew inspiration for this music. In fact, they’ve described the music in genre terms as “Poe-tic Black Metal”.

Poe’s poem “The Conqueror Worm” is a chilling piece of verse, a chilling metaphor for the tragedy of Man, a description of a theater thronged with angels “drowned in tears”, there “to see a play of hopes and fears”, with “much of Madness, and more of Sin, and Horror the soul of the plot”. And in the end, the muttering and mumbling mimes that represent humanity, chased “through a circle that ever returneth in to the self-same spot”, are consumed by a crawling blood-red thing:

Out—out are the lights—out all!
And, over each quivering form,
The curtain, a funeral pall,
Comes down with the rush of a storm,
While the angels, all pallid and wan,
Uprising, unveiling, affirm
That the play is the tragedy, “Man,”
And its hero, the Conqueror Worm.

Constructed around the lines of Poe’s creation, Nimphaion have created a song that captures the epic scale of Poe’s narrative, as well as its theatrical drama, its terrible pathos, and its chilling horror. It seethes with intensity, manifesting the consuming hunger of death, with sweeping keyboard melodies and a choir of rising voices creating images of an angelic host bearing sorrowful witness to the harrowing of humanity.

The surging intensity of the music and the burning shrieks of the vocals get the blood rushing, but the song also includes a sinuous, sorrowful dual-guitar melody that surfaces within the song’s jolting rush and provides a memorable and vital accent.

All in all, a great song for a great poem, and one we hope you’ll enjoy as much as we have.

2 Responses to “AN NCS VIDEO PREMIERE: NIMPHAION — “THE CONQUEROR WORM””