(TheMadIsraeli reviews the new album by the Finnish band Lantern.)

I’ve been eagerly anticipating a new Lantern record since I heard and reviewed their undeniably powerful debut full-length Below. That thrash/death/black combo, which personified a synthesis of early Napalm Death, Celtic Frost, and Emperor, still holds absolutely true and finds itself achieving new progressive ambition on the band’s sophomore opus II: Morphosis.

This is also a new chapter in the project’s lifespan, upgrading from an enthusiastic duo to a full-fledged five-piece, although I still suspect guitarist/composer Cruciatus and vocalist Necrophilos call the majority of the shots, if not all of them. 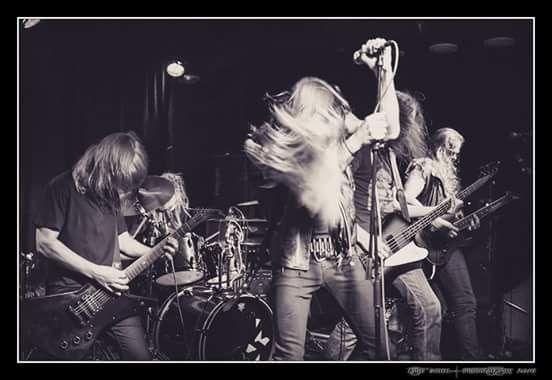 Overall, Lantern are evolving on this album and coming into their own, quickly on the way not to forgetting, but definitely moving on from, the powerful influences at work in their music. In fact, they have reached the turning point so successfully that II: Morphosis stands as a unique album, one that I have no doubt no other album in 2017 will come close to sounding like. Their music isn’t even old school anymore, it’s just the Lantern sound.

The mix is the first big difference I noticed. Below sounded like it was actually pulled out of a time tear from the ’80s into the modern age. Morphosis is definitely way more modern, while attempting to capture a sort of old school ambience and echo.

The best comparison I can give is to suggest a more ambient version of Vader’s ’90s work. It strays away from loudness war conventions, is very chunky in nature, and has a nice organic tinge to it. I dig the sound, and it really serves the music of Lantern well. Even the mix feels like it was built around accommodating that thrash/death/black trinity to the best possible ability. It has a perfect balance of ambience, meat, and brightness.

On Morphosis, Lantern don’t fuck around. The usage of death metal tremolo riffs, black metal chords with esoteric melody, and full-throttle drums combined with thrash intricacy on the guitar front are the backbone of what makes Lantern so unique.

Perhaps the most important achievement is the fact that while this band unashamedly bathe themselves in old school elements,  the way they incorporate them makes the music modern and relevant. The album is a really good workshop in how to write old-school-style extreme metal that doesn’t feel tired or outdated.

When you consider the way in which Lantern mix in progressive songwriting and the more intricate rhythms and drum-work of modern extreme metal, it becomes apparent that there is a division between bands who have the old school extreme metal spirit and bands who just know approximately how to emulate what came before them. Lantern are obviously in the former camp.

The stylistic and tempo diversity of this record is also noteworthy. Lantern really mix it up song by song, and within the songs, as much as they can without falling into the trap of sounding like a mess. This is a near-miracle in and of itself, given that the band constantly flirt with a kind of grindcore looseness in how the performers sync up with each other.

Some songs are flawless combinations of all three stylistic pillars, such as opener “Black Miasma”, “Cleansing of The Air”, and “Necrotic Epiphanies”, while others provide a balance of more stylistically focused songs, such as thrashy death-metal barn-burners like “Transmigration” or the dragging death metal grinder of “Hosting Yellow Fungi” or the doom metal loss of life that is “Virgin Damnation”.

With just their second album, Lantern have made a massive leap both in the overall quality of their music and in their success in escaping their influences, carving out their own path in the metal world. No one really quite sounds like these guys now; they are offering a unique fast-and-loose yet progressive extreme metal sound that’s definitely worth paying attention to now, if it wasn’t before.

They are an important, fascinating edition to the pantheon of this new wave of super-hybrid progressive extreme metal that I’m taking a real liking to. In a nutshell, Morphosis is a masterpiece, definitely a standout record for 2017 that will be hard to touch for its distinctiveness and craftsmanship.

II: Morphosis will be released by Dark Descent on March 17. The cover art was created by Zbigniew M. Bielak.