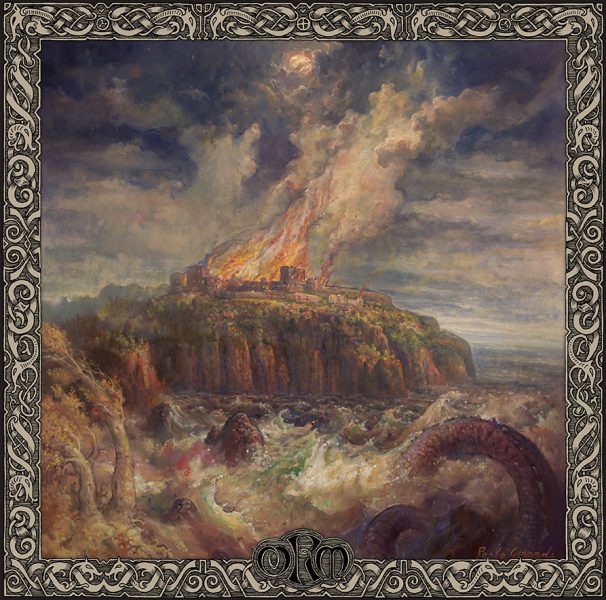 The painting by Italian artist Paolo Girardi that appears on the cover of the self-titled debut album by ORM provides meaningful clues about the music. The gigantic tentacles of a sea beast roil ocean waters beneath a threatening sky as trees seem to recoil in fear and a city high above the frothing waves is engulfed by fire. The scene is riveting, apocalyptic, and mythic. As you’ll soon discover, those same qualities come through vividly in the music of ORM as well.

This new album will be released digitally and on vinyl by the Danish label Indisciplinarian on March 24. It consists of five long tracks, and today we present one of them, which bears the name “Apotheosis“. 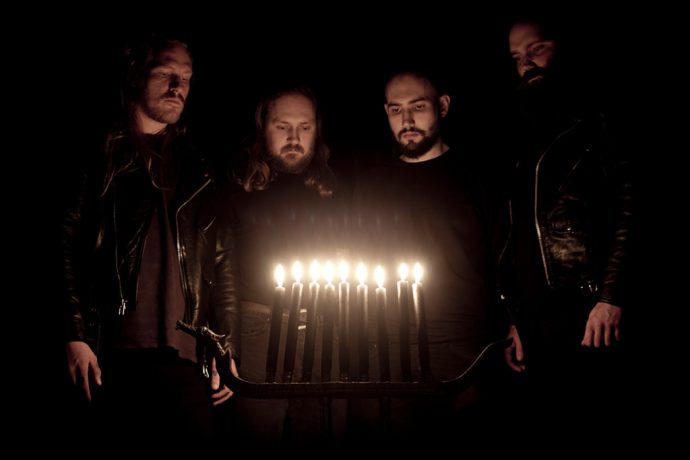 As the band explain, ORM took their name from the old Nordic word for serpent, or worm — “a long, cold and boneless beast that slithers in the abyss.”

“Both hypnotizingly majestic in its calmness and unpredictable like a storm. It lies dormant for long stretches of time only to suddenly strike without warning or remorse…. ORM and the whole of its being is situated in a mythical cosmos of ancient times, where magic, gods and supernatural creatures inhabited the world as naturally as humans, animals, water and forests.”

That world seems to have vanished long ago, “sunken into a now barren earth”, but in ORM’s conception, “Beneath the surface the gods, the beasts and nature are awaiting the moment to arise and once again roam this world and rule mankind.”

Inspired by such ideas, ORM have created a form of melodic black metal that captures both a mythic sense of wonder and the ominous presence of a looming, terrible power that hungers for battle.

The slow, slightly distorted, reverberating acoustic guitar melody that opens “Apotheosis” is mysterious and haunting, opening the door to a different world than the one we see around us. But the music soon becomes powerful and intense, with heavy abrasive riffing joined by a deep thundering in the low end and harsh, bestial growls that rise in a boiling fury.

It’s a vibrant and violent sensation that ORM have created, though they integrate mid-paced rocking stomps and trilling guitar leads that add further dimensions to the sound. ORM also interweave melodies of cold northern melancholy, most prominently at about the six-minute mark, when the storm of sound abates to make way for a sorrowful dual-guitar solo, eventually joined by soaring choral voices that give the music an even more epic feeling.

It’s so nice when visual and musical art come together as well as they do here, firing the imagination as well as the senses. And this is only the beginning of the great serpent’s rising — four more tracks will be coming your way when the album is released on March 24 (and maybe a chance to hear them sooner than that).

ORM was produced by Lasse Ballade (Solbrud, Halshug, Slægt) in Copenhagen, with additional choir recordings in the local Stefans Church. Pre-order information can be found below, along with an album trailer created by visual artist Morten Grønnegaard.