If you’ve been paying close attention to the more violent attractions at our putrid site, then you will already be aware of New Doomsday Orchestration, the forthcoming split release by Italian grind bands Mindful of Pripyat and Stench of Profit. We have previously premiered songs from each band’s side of this electrifying split, but now it’s our sinister pleasure to bring you a full stream of the split on the day of its official release by Everlasting Spew Records — preceded by still more demented introductory words of praise.

The Font of All Human Knowledge tells us that Pripyat is a ghost town in the Chernobyl Exclusion Zone, a town whose inhabitants were evacuated in a frenzy the day after the disaster at the Chernobyl plant. It has figured in works of literature, film, television, and of course music. And the Milanese band whose 9 tracks launch this split assure that we will remain mindful of its fate. 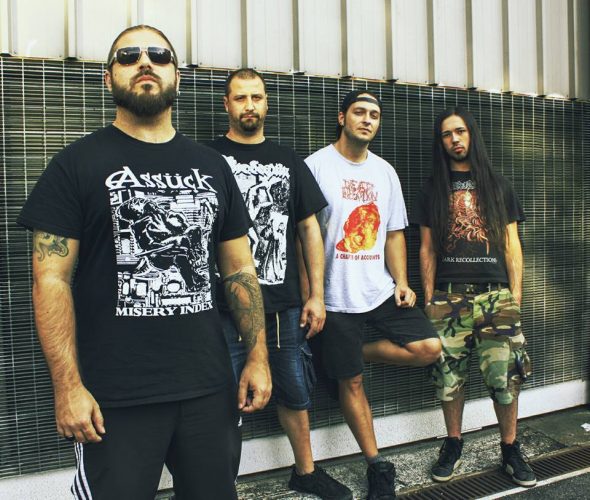 The warning vibrations of a Geiger counter launch Mindful of Pripyat’s explosive side of New Doomsday Orchestration, and that’s the last chance for a breath you’ll get until the Geiger counter goes off again at the end.

With a three-pronged vocal assault that veers from bestial growls to incinerating shrieks and a jet-fueled drum and bass attack that’s as obliterating as it is militaristically precise, the band deliver one rampaging, hammering, frenzied blast of destructive savagery after another.

The radioactive disaster brought to mind by the band’s name becomes a template for the diseased fury of the vibrating riffs and shrieking fret slides, not to mention the high-speed detonations of the grooves in these tracks. Violent and vicious though the songs may be, they also get their hooks deep into the reptile part of your brain and shake your body like a rag doll in the clutches of a psychotic on speed. And when the band do pull back on the accelerator, it’s an utterly grim and doomed experience they deliver. 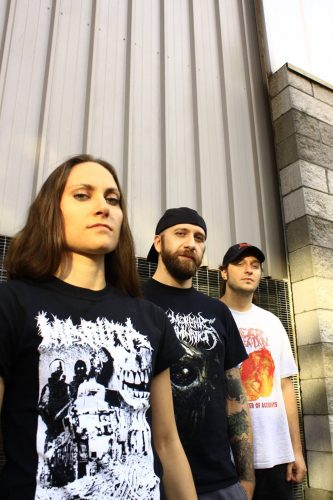 This Venetian band blaze and blast their way through 18 tracks on the split, twice as many as Mindful of Pripyat, and they leave the listener breathless and broken but on fire.

As I wrote when we premiered three tracks from this assault, the riffs have a deep, filthy sound, sometimes storming and sometimes raking and jabbing, and the drum resembles automatic weaponry. The combined effect is a non-stop storm of unhinged and violent noise, something like mechanized warfare under the control of madmen in a blood frenzy.

But although the music is so ferocious that it verges on the chaotic, it never goes completely over the edge because the performances are so precise and tightly integrated, and although the songs fly by in a flash, the grooves are quite present and quite quickly addictive.

The vocals also stand out, veering from gruesome roars to reverberating howls and skin-splitting shrieks, the kind of vocals that would be at home in a horror-prone death metal band, or perhaps a frenzied and freakish collaboration between torturer and torture victim.

Like Mindful of Pripyat, Stench of Profit also prove they can be just as electrifying and punishing when they ease back on the throttle, deepening the atmosphere of grim destructiveness and hammering your poor head straight down into the pavement.

As mentioned, New Doomsday Orchestration is being released today — March 1 — by Everlasting Spew. The cover art for the split was created by Too Many Skulls. Everlasting Spew is releasing the split on 12″ vinyl, on CD, and as a digital download. To order the album in physical form, click HERE or visit Bandcamp via this link, where it’s also available as a digital download:

2 Responses to “AN NCS SPLIT PREMIERE: MINDFUL OF PRIPYAT AND STENCH OF PROFIT — “NEW DOOMSDAY ORCHESTRATION””