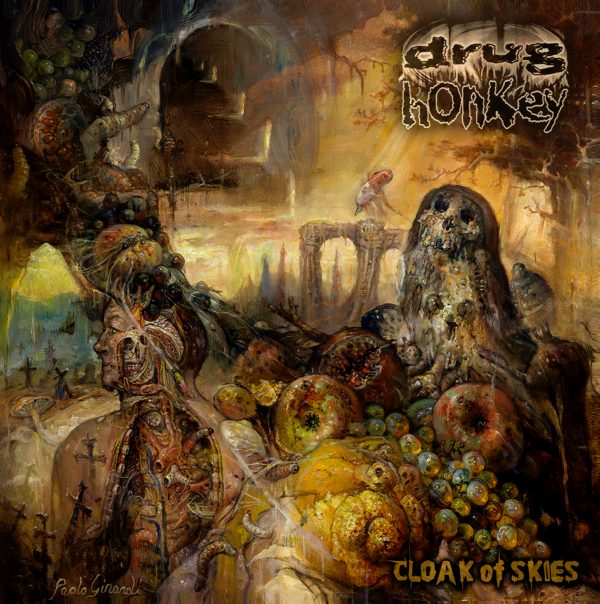 Paolo Girardi’s cover art for the new album by Chicago-based Drug Honkey stopped me dead in the tracks of my internet scurrying when I first saw it, and when I learned that it was a new album by Drug Honkey, I experienced a combination of drooling and shivering, a blending of desire and incipient loss of mental stability.

Both of those effects were produced by the memory of the band’s last album, 2012’s Ghost In the Fire, and so it’s with a similar combination of dread and tingling anticipation that I’ve approached this new album, Cloak of Skies — which will be released on May 5 by Transcending Obscurity Records.

I had some difficulty trying to capture the experience of Ghost In the Fire when I wrote about it so many years ago. I re-read the review this weekend, and had forgotten how many words I had spilled in an effort to do that. They included these crazed attempts to capture the imagery that the music provoked in my shaken skull: 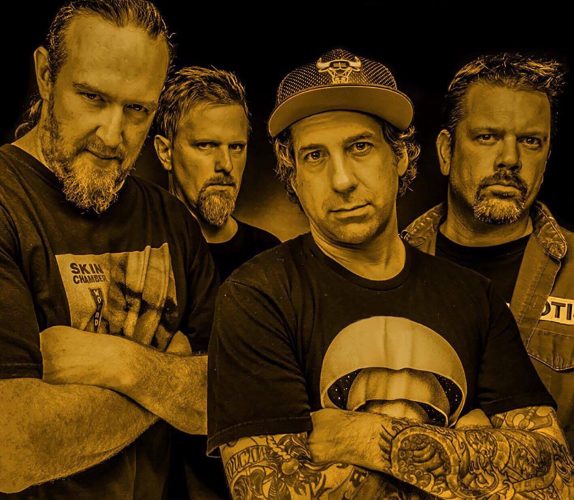 “What Drug Honkey do is manufacture atmosphere — blasted, burned, and black. They suck all the air out of the room and fill the void with a psychoactive fog that’s the stuff of nightmares.

“They make the sound of a gutted city whose lifeless buildings are crumbling, imploding, and burning like giant waste bins beneath the bridges of catastrophe. It’s the noise of giant earth movers digging mass graves. It’s the soundtrack to the sun burning out and the planet freezing in utter darkness. It’s a recording of demons convulsed in the throes of insanity….

“Listening to Ghost In the Fire is a nightmarish hallucinatory experience, one that captures the imagining of damnation about as well as anything you’ll hear this year.”

What we have for you today is a stream of the new album’s title track. And before I unleash another convulsion of demented words, here is what Drug Honkey’s Paul Gillis told us when we asked for a comment about it:

“The title conveys the basic idea that in life much of the time there is an illusion of clear skies; where everything is wonderful, but underneath the sky is extremely dark, and a possible end is near…

“Being that this song is the title track of the album I decided to have Bruce Lamont collaborate on this one, where his sax almost resonates as a clarion call or warning of sorts that something must happen/is going to happen..

“Cloak of Skies” (the song) opens a vault of terrors and pulls the listener in. The slow monster of a drum beat and deep groaning chords that course through the song have a lulling, even hypnotic effect, but the effect is paradoxical, because as strangely mesmerizing as the song may be, everything else about it is the stuff of nightmares — a poisonous miasma of ghostly reverberations, deranged shrieking, low moaning, and febrile skittering, the sounds periodically building to crescendos of madness.

And that’s just referring to the electronic and instrumental sounds in this unnerving experience (including the contributions of saxophonist Bruce Lamont (of Yakuza and Corrections House). The vocals are perhaps even more harrowing, providing a morphing cacophony of gruesome howls, slithering whispers, crocodilian growls, horrifying shrieks, ritualistic spoken words, distorted reverberating proclamations, and much else… virtually none of it sounding human.

It’s a surreal and ugly experience, yet it has a magnetic and immersive quality. Just don’t expect to come out of it the way you went in.

Drug Honkey’s line-up and the album’s track list are below:

Transcending Obscurity is offering the album in a double-vinyl edition, as well as on CD and digitally, along with a limited-edition shirt. To inspect the options and place orders, go here:

The new song and an album trailer featuring Justin Broadrick’s remix work are below:

9 Responses to “AN NCS PREMIERE: DRUG HONKEY — “CLOAK OF SKIES””