I’ve been very curious to hear Dysangelium, which is the debut album of Sweden’s Ensnared. Dysangelium will be jointly released by Invictus Productions and Dark Descent on May 12. The first track, which debuted yesterday, is very promising. Its name is “Apostles of Dismay“. 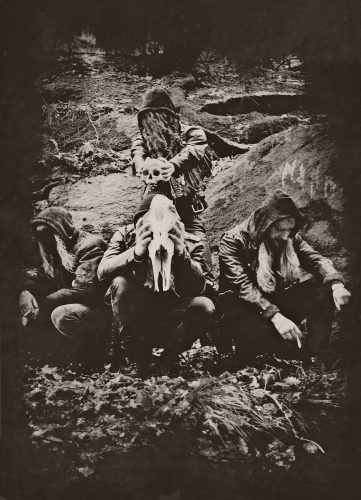 I do like the little moaning bass line that noticeably pulses along in the song’s grim and poisonous opening, and I also like how the song gradually shifts into higher gears until it starts to really rip in a barbaric fury of writhing, dissonant riffs, pummeling drums, and ugly roaring. The twisted lead guitar machinations resemble a nest of cobras that have lost their minds, and what’s not to like about that? 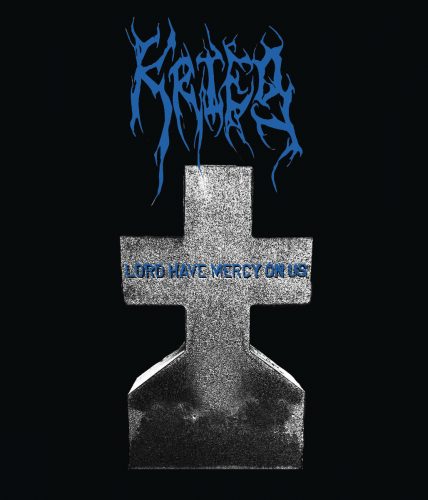 Krieg’s last album was 2014’s Transient. Since then Krieg has participated in a split with Leviathan and a collaboration with The Body. Yesterday we got a preview of what the band have been working on since Transient, perhaps a sign of what the next album will bring us.

The song in question is called “Circle of Guilt”, and it apparently won’t be up on Bandcamp for long. The snap of the snare drum and the punch of a heavy riff get the head moving, but the song rings with a grim, twisting arpeggio and eventually gallops and pulses with vibrant energy. Augmented by emotionally boiling and flesh-rending vocals, the song is a dark, back-to-basic rocker that’s tremendously infectious. I got flashes of Amebix listening to this, which is intended as high praise. 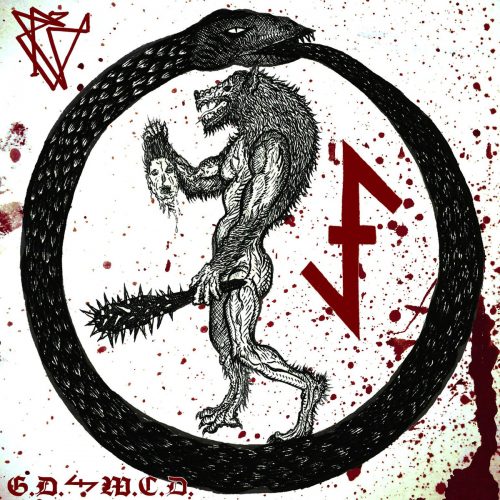 It seemed logical for me to follow that Krieg track with these two from Goat Disciple, since it was a Facebook post by Krieg’s Neill Jameson that led me to them.

Goat Disciple appear to be based in the bowels of Salt Lake City, and these two tracks appear to be destined for an MCD release this coming summer called Wolfcult Domination. The two songs that have been posted in recent days are “Oreb Zaraq” and “Mammon“.

With a name like Goat Disciple and an EP named Wolfcult Domination, you may have a few guesses about what this will sound like, but you might be wrong. Yes, it’s a vicious, ripping frenzy, but man, the rhythmic drive in the songs is really powerful, variable, and  compelling, and the music twists and turns in interesting directions rather than following a straight red line of go-for-the-throat savagery. The soloing in particular is beautifully conceived and performed, but the songs as a whole display welcome dynamism, complexity, and technical athleticism.

Ugly growls and torturous shrieks are the main vocal styles, and the low-end heaviness lends the music a death metal heft to go along with the blood-freezing blackened rapaciousness and the instrumental exuberance. The best two words I can think of for the songs are “explosive” and “electrifying”. A fantastic discovery. 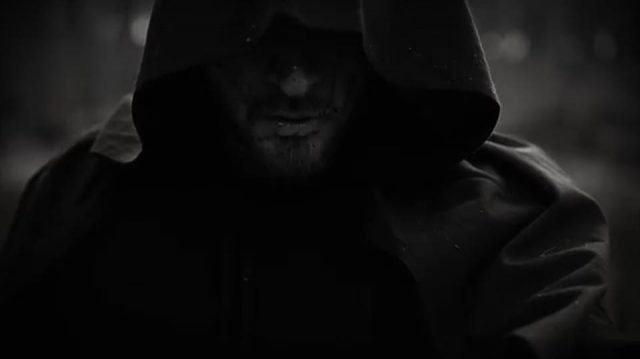 I like this next song quite a bit, but it’s the combination of the video and the song that’s the main reason I shoehorned Hexis into this post at the last minute.

Hexis are a Danish band we’ve written about several times in the past, though not in the last three years. They slather together hardcore, black metal, and sludge, veering from blast-beats and cauterizing riffs to glacially slow, soul-sucking oppressiveness, combining fury and low-end weight, atmospheric darkness and I’ll-eat-your-face berzerker vocals.

All those qualities are on display in this next song, “Septem“, which will appear on the band’s next album, Tando Ashanti. It will be released in April through this consortium of labels:

The video, created by Mindspark Films, is ingenious, and as disturbing as the music. A line of people march to their gory deaths, in thrall to a hooded man with a knife… but it doesn’t unfold in a straight line. 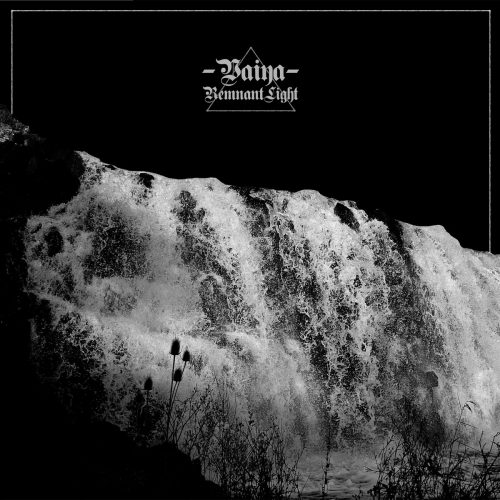 As regular readers know, I gravitate toward everything that certain labels release, and Nordvis and Bindrune are two of those. Yesterday I received a Bandcamp alert that they are re-issuing (on CD, vinyl, and digital) the third album of the Australian one-man band Vaiya (the work of Rob Allen of Encircling Sea), which first appeared in 2014 through Natural World Records.

This really is a superb album. I was first introduced to it by Panopticon’s Austin Lunn, who called Vaiya “one of the best black metal projects out there” and praised this album in his 2014 year-end list at NCS as “meditative, introspective, personal music… deep, trance-inducing black metal drenched in humidity, deep forests, and spiritual exploration”. And I’ll add this quote from an interview with Rob Allen at Wonderbox Metal:

“Remnant Light is a banishing ritual. The music is but a backdrop for the vocal performance. The lyrics were conceived to be performed ritually, to banish negative energy. At the time it had been building in my life and it needed an outlet, Remnant Light is the result of that.”

For those who haven’t discovered this album before, you can now listen to the complete version of the first track from Remnant Light on Bandcamp. “Confrontation” is one of three 13-minute tracks on the album, and there is indeed a trance-inducing quality to it, but it’s far from tranquil. In its tension, in its intensity, and in the stunning no-holds-barred quality of the vocals, it seems to embody the idea of catharsis, though it becomes beautifully sorrowful as well.

P.S. The same interview I referred to above includes this answer to a question about whether Vaiya is working on new material:

“I have a new album written and am hoping to start recording soon. As I said before, times have been and are changing for me personally and for my music, so the new album will be a fair bit different in both sound and theme. I am still focusing on personal improvement and continuing the fight against the dark elements of my nature, this new album however is a little less asking it to leave me be, and a little more declaring war upon it. Thus, it is all more aggressive and particularly its sound.” 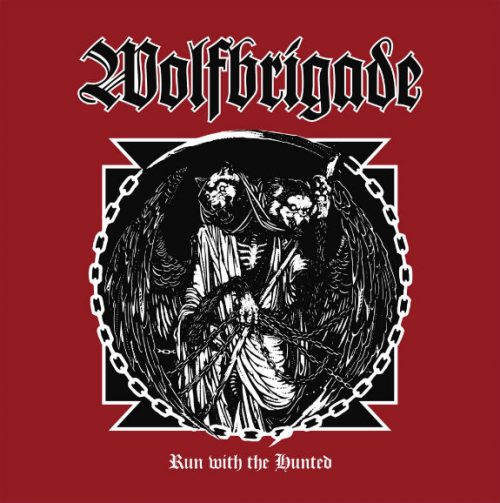 I’m bending the boundaries of SHADES OF BLACK with this final item of new music that appeared yesterday, but fuck it, I don’t want until my next round-up to gush about it.

This is “Warsaw Speedwolf“, a track from the new album by Wolfbrigade. Entitled Run With The Hunted, it will be released by Southern Lord on April 28th. This is the band’s ninth album, about which Wolfbrigade made these comments:

“We looked to explore our rawness, writing straight-up, in-your-face, primitive songs. On this record, we decided to push the melodic strains even further, but without losing either intensity or brutality. Lyrically we have been inspired by both classic and obscure dystopian literature, finding suitably horrible metaphors for the decline of western society. The search for freedom continues, but this time the path is pointed inwards, into ourselves.”

“Warsaw Speedwolf” is packed with power, near bursting with the furious vibrancy of these lycanthropic punks. The riffs are also enormously infectious, though as catchy and compelling as the song is, I fully expect it will drive mosh pits mad when they do this live.