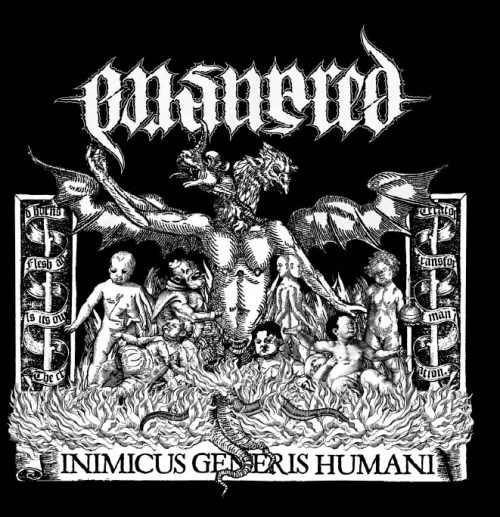 To try to sum up the music of Ensnared‘s new album Inimicus Generis Humani as “progressive death metal” or “avant-garde death metal” would probably send the wrong signals. It might make people underestimate how vicious, how emotionally disturbing, and how mentally mutilating the music often is. But it’s definitely something very different from the kinds of death metal you come across on the usual beaten paths. Perhaps “interdimensional death metal” would be closer to the mark for music of such predatory spirit and such evil alien allure.

Inimicus Generis Humani is this Swedish band’s frightful and fascinating second album, following 2017’s excellent Dysangelium. The same two labels that released that first record, Invictus Productions and Dark Descent Records, will be releasing this new one on February 14th. Not long to wait, to be sure, but you won’t have to wait a moment longer to listen to the album, because we’re bringing the full stream to you today. END_OF_DOCUMENT_TOKEN_TO_BE_REPLACED

I’ve been very curious to hear Dysangelium, which is the debut album of Sweden’s Ensnared. Dysangelium will be jointly released by Invictus Productions and Dark Descent on May 12. The first track, which debuted yesterday, is very promising. Its name is “Apostles of Dismay“. END_OF_DOCUMENT_TOKEN_TO_BE_REPLACED