We’ve had a very big day of premieres at our site today, including more than a few big names in underground circles, but we have one more premiere. It comes from a Boston-area metal band, younger than other names scattered across our site today and more under-the-radar… at least so far… but one whose new single got its hooks in my head from the first listen, and revived some nostalgic feelings as well. And it comes in the form of a video written and directed by the band’s guitarist that makes its own forceful impact.

The name of the band is Lost To the Waves (formerly known as Elegy), and the song is “Remember Me“. It’s destined to appear on the group’s debut EP, Nightfall, which is scheduled for release on March 31.

These dudes look like a friendly, fun-loving group, don’t they? 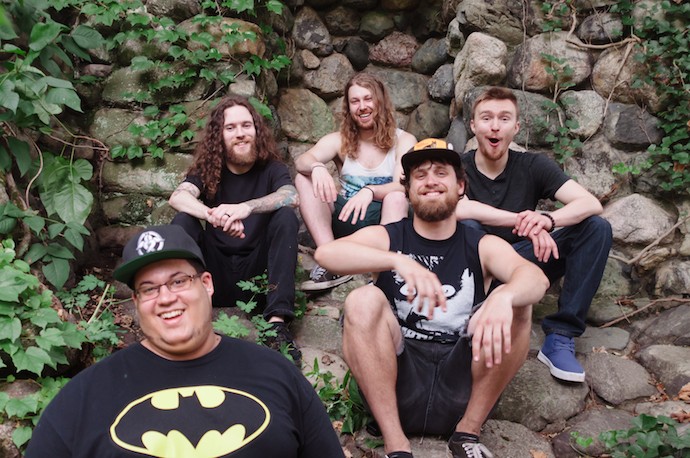 And there’s certainly a lot of energetic fun in this song, too, but there’s also more to it than that… and those other currents in the music are underscored in the video, which is the antithesis of fun.

The song reminds me of why I and lots of other people were so attracted to metalcore in its hey-day. It has plenty of jolting grooves, bracing gallops, and harsh roaring (thank goodness, no clean singing), along with fluid guitar melodies that prove to be catchy and memorable, along with fiery soloing… and something in the music that also conveys the bitter taste of anguish.

As described by the band, the video — which is dark, wistful, and eventually despairing — is “a story about a man trying to find his identity and in the end giving up on himself and turning to suicide. All while struggling with addiction, love, his loss of faith in god.”

The song, and Nightfall as a whole, were recorded by Sean Fitzpatrick at The Brick Hithouse, where bands like The Ghost Inside and Bury Your Dead (whose own story gave rise to this site’s name back in 2009) have also recorded, and it was mastered by the famed Brad Boatright at Audioseige (Four Year Strong, Defeater, Code Orange). Nightfall will be available on March 31st via iTunes, Spotify, and Bandcamp. The video was written and directed by guitarist Nick Court.

Nightfall can be pre-ordered at the link below, and will be available for streaming at Bandcamp (also linked below) on March 31.