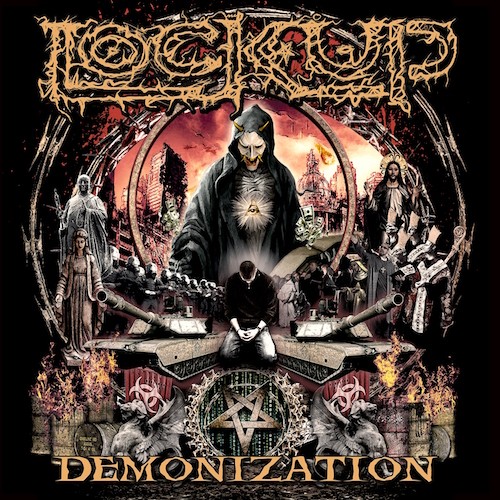 (We present DGR’s review of the new album by the death-grind super-group Lock Up, which was released on March 10th by Listenable Records.)

It is rare that I find myself admiring a musician for the amount of fun he seems to be having on a disc; but I sincerely hope that one day I have half as much fun as Nick Barker seems to be having with the toms on his kit on Lock Up’s new disc Demonization.

We open with musing on that fact because if there is one dominant thing you won’t help but notice over and over during the vicious barrage of auditory violence that Lock Up wield against their listeners during Demonization, it is the constant drum fills that feature the upper part of the man’s drum kit as he just flies through the whole thing. Someone pulled him aside and told him ‘go fast’, and that is what he did for most of the album, save for three songs where the group actually slow down slightly, and he unleashes some ultra-tight blasts and rolls constantly, making sure every drum and cymbal available to him gets the everliving shit beat out of it.

But of course, that’s much like the entire listening experience; it is why we come to grind-stalwarts Lock Up in the first place, right?

Demonization arrives almost six years after the group’s last album, Necropolis Transparent, which I enjoyed a bunch (I don’t think I reviewed it here at NCS, but I know I included it on one of my year-ender lists when I first arrived after my dinghy was rescued from the wider sea of the interwebs). It keeps with the group’s pattern of infrequent releases, as Necropolis had come out close to a decade after the album prior to that one.

At its core, Lock Up’s lineup has maintained both grind legend Shane Embury and long-time death metal journeyman drummer Nick Barker. Guitarist Anton Reisenegger joined them a few years prior to the release of Necropolis Transparent as the group spun the grind machine back up to get it moving again — which was prompted by the passing of previous guitarist Jesse Pintado in 2006, and former Brutal Truth/long-running Venomous Concept vocalist Kevin Sharp picked up the vocal reigns in 2014 from previous screamer Tomas Lindberg.

Long story short, the list of names has long been part of the pitch for Lock Up; they’re part of a small handful of bands as close to a deathgrind supergroup as you’ll ever see, though the grindcore side and its musicians seem like the sort of genre encampment that would react virulently to the idea of there being a ‘supergroup’ within it, as opposed to a gathering of musicians who just want to make a fucking ton of noise and immolate the crowd whilst doing so.

The way Lock Up write music and the speed at which they play it is almost purpose-built to bring out the rawest screams of their vocalists, and in that sense Kevin Sharp is perfect in his new role, sounding harsher than hell throughout Demonization. Much of his delivery is extremely hoarse and delivered at an extremely fast pace. At multiple points it sounds like the delivery is within the same gasp for air — as in the opening of the song “Locust”, where the words pile out over top each other like people escaping a burning vehicle.

In fact, the first few songs on Demonization — until you hit the title track at song four, which is almost a doom track by comparison, with the album title meant to be a crowd shout during its chorus  — all feel like one intense assault, even though it is spread around three very brief breaks. Between the three of them they total close to nine minutes, but the pace never seems to let up until you hit the slower grinder in “Demonization”. 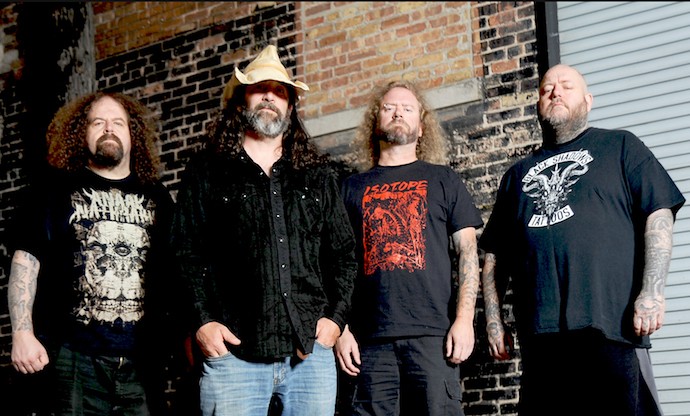 “Blood and Emptiness” kicks the whole album off and makes it seem like the disc will only have one gear in its ultra-fast tendencies. “Blood and Emptiness” pretty much spells out the buzzsaw riffs that are the foundation of Demonization as a whole (alongside the God Is Dead, Satan Lives! sample), but it also has a fantastic closing bit where there’s no guitar, just drums blasting away, bass rumbling over the top of it, and the vocals just shrieking on the pathway to the next measure of the song. They use it a couple of times throughout, but it really increases in intensity in the back half of the song, especially once you know that it is going to lead into the murderous “The Decay Within The Abyss” — which is the first time the galloping mosh-riffs making their appearance. If “Blood and Emptiness” was meant to raze everything to the ground by the end of song one, “The Decay Within The Abyss” is the first foray into the warfare launched over the top of the rubble.

The thing about Lock Up, their chosen genre fare, and the Demonization album as a whole, is that there is a severe lack of subtlety. The music within this disc is a blunt object — about as subtle as a brick to the face. You can almost guess by the title of “Demons Raging” what the song is going to sound like. Like the first few songs on the disc, and much of the meat that follows, it’s a white-knuckle, accelerated affair that has the listener strapped behind the wheel of a car and a cinder block on the gas pedal. It is noisy, turbulent, and destructive.

If you really don’t like a high-pitched sawing guitar, Demonization won’t be for you because most of its fourteen tracks have one riff transitioning into another, all of them equally fast and almost manic in combination with the rest of the music. One of the least-subtle songs also feels like the biggest “fuck you” to everything in general and is empowering as well — and that’s the album closer “We Challenge Death”. It repeats the “We Challenge Death” refrain multiple times throughout the song, with the listener feeling like he has the wall of flame that the band create musically as his backup. It’s a take-on-the-world song within an album that’s made for when you need to lash out against everything anyway. 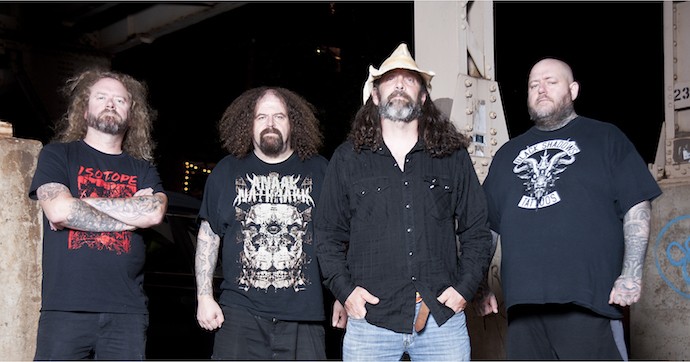 If one were to draw comparisons between Demonization and its immediate predecessor Necropolis Transparent, you’d find that Demonization is a little bit grindier than before. While the band have their foot firmly planted in the death metal + grind hybrid that allows them to create three-minute-plus fireballs, they keep the pace going a bit faster than before; they also have a little bit of a slimmer tracklist with fourteen songs.

Of course, mentioning that immediate predecessor must come with a caveat because of the time between albums. That feels almost purposeful, because since Lock Up’s 2002 release Hate Breeds Suffering, every Lock Up disc has felt like its own seperate thing. Having three vocalists spread across four albums as a whole will do that, too.

Taken on its own, though, Demonization is a hellfire of a good time. It is relentlessly fast for much of its run-time, and the constant guitar sawing makes most of the fourteen songs feel like one brick of music that needs to be taken in at one go, with the volume maximized. If you want to switch from just general moodiness in your life to absolute anger, Demonization is one of those albums meant for that exact thing. Sometimes it feels like you’ve gone through multiple runs of the album in just one spin, as the disc just keeps pounding away at you.

It’s an exhausting experience for sure, but it’s that burnt-to-a-crisp extremity you’re after in the first place when you listen to a band with a pedigree like Lock Up’s. They deliver that on all fronts. If you want to feel like a scorched skeleton by the time an album wraps up, Demonization is the wall of fire meant to do that for you.

One Response to “LOCK UP: “DEMONIZATION””