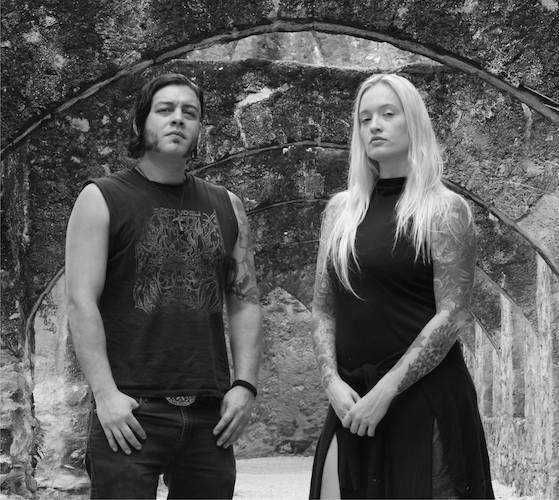 (NCS contributor Comrade Aleks brings us both an interview with one of the two members of Texas-based Cursus and the premiere of an official video for a song from their forthcoming debut album.)

Texan sludgy and psychedelic doom-duo Cursus arrive with their massive self-titled full-length debut. The album will be released on vinyl on the 28th of April, 2017, via Artificial Head, but here — right alongside the interview that the band’s guitarist and vocalist CJ Salem provided to NCS, we have a premiere of the official Cursus video for their new song “Her Wings Cover the Skies”.

Deep, heavy, low-tuned, and ominous, Cursus remind us of different aspects of bands like Neurosis, Ufomammut, and YOB, but the duo of CJ Salem and Sarah Ann Roork worked out their own charismatic sound. These crushing and mesmerizing riffs are worthy of your attention.

Hello Cursus! How are you there? What’s the band’s current status?

Hello! In addition to our frequent live shows, Cursus has currently been staying busy preparing to release our self-titled record this April, featuring five selected songs that we wrote over the last few years and a cover of Pink Floyd’s “Set the Controls”.

The band was born in 2012, but only now your debut album is going to be released through Artificial Head Records. What did you do all this time?

We began playing together in the winter of 2012, put out a demo, and then had our first show early summer 2013. The first few months together we spent cultivating our sound. We wrote around 10 songs, and then picked a handful that best represented us to put on a CD. Finding the right person to do the recording was a concern, as we wanted to make sure it sounded like us and represented our voice as well as changes we had gone through throughout the years. We went with our good friend Joe Camacho, who had recorded a few other local bands on the heavy end.

We got a lot of good feedback about the demo and our first few shows, which kept us wanting to push further to continue to find out what the band meant to us. We then spent the next few years playing live as often as we could, pretty much anywhere they would let us. We made a few attempts at another recording but things kept falling through, which eventually led to us turning our basement into a recording studio so we could have more control over the situation. 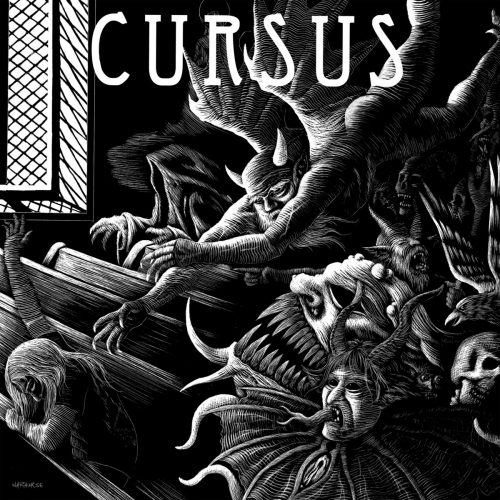 Cursus is a duet — Sarah Roork (drums) and you (guitars/vocals). CJ, is this format enough for you to express all the musical ideas you want to put in your songs?

Cursus started as a two-piece partly through convenience, but it is also a reflection on how we both view music. We are both fans of minimalism and wanted to see how far we could expand with ultimately percussion and rhythm. We also alternate with other instrumentation that the music may call for.

What are your requirements for the Cursus sound, what is its cornerstone?

The music has a layered feel to me and tends to gradually intensify. We try to create hypnotic rhythmic phrases that are akin to mantras played to coerce the audience into a detached, open state of mind. We predominantly use large diameter drums and high wattage tube amplifiers to achieve a bigger and warmer sound. Our non-traditional instruments include shakers, tambourines, melodica, Theremin, and droning synthesizers.

Cursus – Her Wings Cover the Skies

The new album is well-produced and competent, how did your recording sessions go? Did you compose most of the material before you entered the studio or did you leave some space for improvisation?

The recent release was recorded by a longtime friend and fan of the band, Chris Dillard, who had heard a lot of the early Cursus years and had ideas for an album. We took about 2 months and recorded the album in our basement where we rehearsed, to capture how we had tuned the room for our sound. The sessions went very smooth with minimal takes and felt very natural.

The first song “Her Wings Covered the Sky” had a less structured approach that slightly changes with each performance. We like to see where that song takes us with different verses that we interchange. The others had a more solid structure to them.

Cursus is tagged as an occult band. How much of that is in your music, in your lyrics, or in your life?

Some of our subject matter speaks of battles, early science considered witchcraft, and ancient knowledge that was lost through the years. History, and its cyclical nature. I myself practice transcendental meditation.

The band has a charismatic sound, though some influences are something natural in your music. Whom would you name as your teachers of doom affairs?

We have very eclectic tastes in music but the heavier parts come from variations of classic rock, world music, goth, and industrial instrumentation. I believe you can hear equal elements of each bleeding into the songs.

Did you meet any obstacles during the recording session? Do you have difficult songs on the album?

There were some sound reflections and echoes we needed to control when using our rehearsal room but it wasn’t anything we couldn’t remedy. In terms of the difficulty of the songs, we pretty much knew them well. It was more about being “in the zone” for the full 8 minutes or so during the song recording. 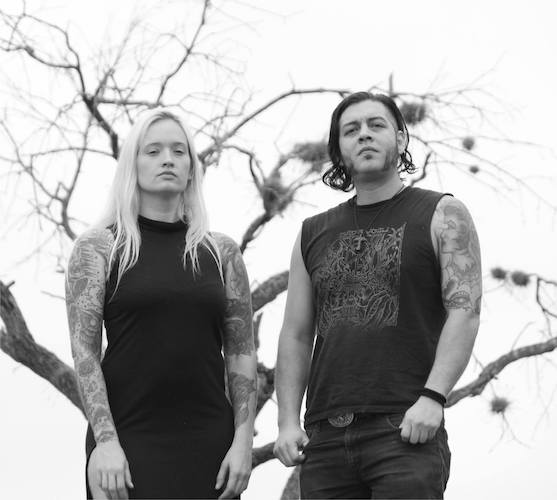 The album is to be released as a limited vinyl edition; do you plan to release it on CD?

A limited vinyl release was discussed with our label head Walter Carlos at Artificial Head Records in the summer of 2016, with a possible cassette tape release. A CD release was not approached mainly due to our partialness to vinyl and tape reproduction.

Your home city is San Antonio. How is it to live there? How many opportunities do you have there as a band?

We definitely love San Antonio. We play locally very regularly, and we try and attend as many art and multi-genre gigs in and around our city as we can. We also help other bands book shows and provide merchandise printing for local artists and musicians. Trying to create a sense of community in our music scene is important to us. We are, first and foremost, huge music fans.

What are your further plans for 2017?

We have a full US tour planned at 6 weeks out for the summer of 2017. We look forward to seeing some familiar faces and bringing the new page of Cursus to new people.

Thanks to Richard S Jones, Sheltered Life PR for organization of the interview. The new album can be pre-ordered here (and you can listen to one more song from the album below):