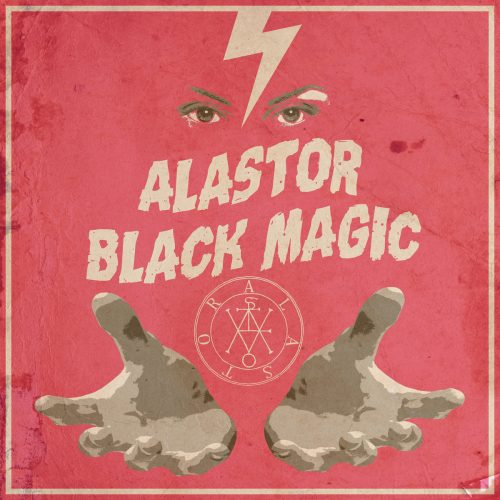 It’s time once again for us to confuse the hell out of people who are visiting our site for the first time. And apart from the fun of sowing confusion and discord through defiance of our site’s title, we are finding our fun today in Black Magic, the new album by the Swedish doom band Alastor.

But it is a peculiar kind of fun, because the music itself is like a near-apocalyptic hallucination, a mesmerizing one that will stay in your head for a long time after taking the trip — and the trip is yours for the taking, because below you will find a full stream of the EP in advance of its March 18th release by Twin Earth Records. 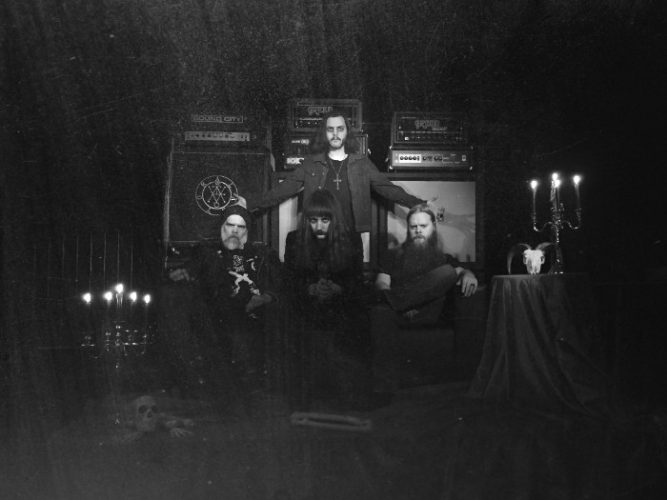 We know very little about Alastor apart from the music they make. The four people in the line-up come from other bands, but we don’t know which ones, and they conceal their identities with initials. It’s quite evident, however, that they know what the hell they’re doing.

The style of doom to which Alastor devote themselves, a style that has a heavy psychedelic vibe from decades past, has been recommended to fans of Electric Wizard and Uncle Acid and the Deadbeats. The style may be familiar, but Alastor’s command of it is so impressive that Black Magic casts a deep spell.

The album consists of only three songs, but they’re long ones — two of them especially long.

“Enemy” is the 12-minute opener, which itself opens with slow, fuzz-bombed note harmonies and tom beats, and when the main riff kicks in, it feels like hammer blows on coffin nails, driving them into rotten wood. The unearthly guitar leads moan, howl, and shriek like a lost soul in the afterworld, and the high, wailing vocals echo like they’re coming from the next catacomb over from the one where you’re being bricked up behind a wall, in your moldering pine box.

The album is full of trippy, psychedelic guitar solos that slither and squall, and “Enemy” provides your introduction to them. Eventually, the song becomes even more squalid and oppressive, all the light and oxygen being sucked out in search of a perfect vacuum, with one final mind-warping solo ushering the listener into the void.

I wondered what would follow the apocalyptic finish of “Enemy”. I didn’t think it would be possible to sink much lower, and sure enough, “Nothing To Fear” begins in somewhat more animated fashion, with a riff and a rhythm that gets the head moving again, and through repetition drives itself into your bobbing skull like a spike. Like “Enemy” it’s anchored by a damned infectious melody and features more trippy soloing and more wailing, soulful, but spooky vocals that bring remembrances of Robert Plant. After a freaky bridge, it rumbles and rolls in a hallucinogenic haze, accented by yet another squalling, flickering solo.

The massive title track closes the album, clocking in at more than 14 minutes, and it’s the crown jewel of a very strong album overall. “Black Magic” begins sort of like “Enemy” ended, in a merciless dirge, and then kicks into its main gear, low and slow.

By this point in the album you’re already starting to see things that aren’t there, to feel the cold touch of apparitions, forgetting to go to the bathroom, deciding that despite what science says, you really don’t need food or water. That mirage in the distance looks like sustenance, if only those looming bat-winged things would fly away from it. The trance you’re in feels like another life, especially when the very talented vocalist sends his voice to new heights of passion and the soloing becomes a djinn of fire in the desolate waste before you.

And after all that, about 8 minutes into this trip, the bassist goes solo, slowing things down even more. Before you know it, you’re digging your own grave, which will have no marker. No tears will be shed, other than your own, and the ones that leak like rain from the mesmerizing new vocal refrain, which becomes the song’s high point. And don’t bother thinking it will leave your head when the song ends; it won’t. 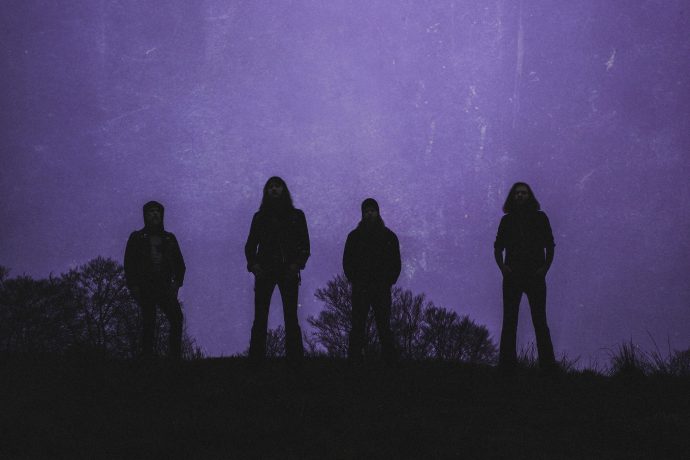 And now a few words from the band:

“People are always expecting us to have some fancy comments about the album in general or some deep explanations to why the tracks turned out the way they are. We wish we could say that we’re sorry to make people disappointed.

“This album pretty much came to us. Our general lack of interest in the human world and its so-called society created the need for a way to ventilate. Instead of leaving this world (that wasn’t meant for us anyway) and taking as many as possible with us, we simply went down to our damp and moldy cellar rehearsal space and summoned Black Magic. So to all of you out there who appreciate our music; we thank you, and hope you’ll enjoy it. We’ll make our next album a shitty one, just for the sake of letting you all down.”

Black Magic was recorded by Magnus Sörensen at KulturVerkstan. It was mixed and mastered by Hannes Heed at Black Sword Studios. The cover art was created by Helfvete Art, and the logo by the great Jinx Dawson.

Pre-order Black Magic on CD or digital here (and enjoy our stream below, along with a video for “Nothing To Fear”):

2 Responses to “AN NCS ALBUM PREMIERE (AND A REVIEW): ALASTOR — “BLACK MAGIC””