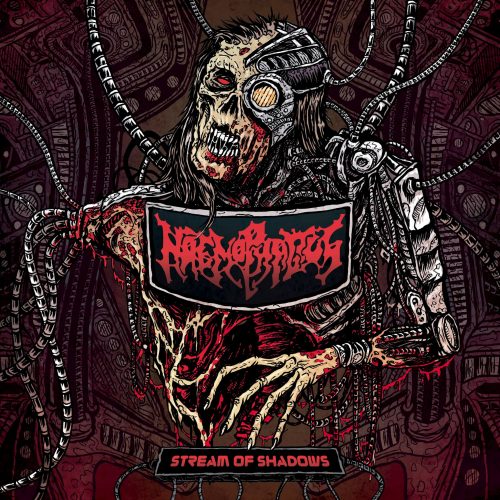 I would like to name the members of the Sicilian band Haemophagus who participated in the recording of their new album Stream of Shadows, because each of them deserve a standing ovation and a cascade of roses on their stage (or perhaps more fittingly in their case, a cascade of body parts and blood splatter):

Giorgio (lead guitar, bass, vocals), Gioele (lead guitar), David (drums). (When the band perform live, Marco is the bass player, since Giorgio apparently has only two arms and hands instead of four).

And why do they deserve a standing ovation? Allow me to explain — and then I will present you the opportunity for a more direct understanding as we deliver the music on Stream of Shadows in all its riotous glory. 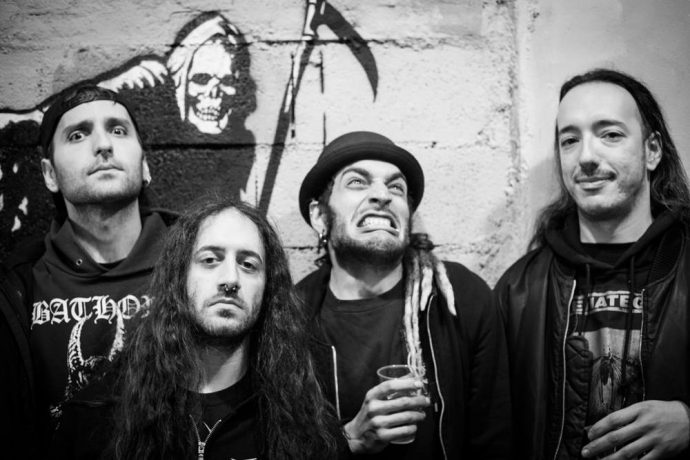 If you’re unfamiliar with Haemophagus and you do a bit of reading, you’ll find references to them as a death/grind band influenced by the work of progenitors such as early Carcass, General Surgery, Repulsion, Autopsy, and Terrorizer. But as great as those names are, such references still really don’t do justice to the kaleidoscopic explosiveness or inventive exuberance displayed on this new album.

The 14 tracks on the album are compact, most of them in the two-to-three-minute range, but the band pack a breathtaking amount of variety into each song, with turn-on-a-dime tempo changes, remarkably acrobatic drumwork, dizzying fretwork, and seamless integration of ingredients from across a range of extreme metal traditions. Most of this is happening at high speed, too, and the precision and technical dexterity with which the songs are executed is often jaw-dropping.

(I don’t mean to take anything away from the impact of the vocals, which are downright murderous, the lyrics exclaimed by a voice that sounds like a cross between a big metal file working on a length of rusted pipe and an enraged bear about to crunch down on a human skull.)

There’s also plenty of mercurial lead guitar work in these songs, most of which have an air of derangement about them, but also inflict dismal, queasy, hallucinatory melodies on the ears. And although I’m spoiling a few of the album’s surprises here, there are some jazzy instrumental interludes in “Meteor Mind”, “Monochrome”, and the longest track on the album — which happens to be an instrumental piece that closes the record — “The Darkest Trip”.

The soloing within Stream of Shadows is also, unsurprisingly, another strength. It’s not overdone, but when the solos do explode in whammy-bar swoops and dives or fret-burning flame-throwers, they bring even bigger smiles to the face (in addition to melting faces).

It’s very tempting to write a track-by-track review of the album, because each track has its own manifold twists and turns, with big surprises lying in wait around each hairpin curve (some of which I’ve already spoiled). I’m not going to do that to you, but I do encourage you to give the album a full listen, all the way through. I feel pretty confident in promising that you won’t lose interest; you’ll probably only lose a few teeth.

Stream of Shadows is being released today (March 20th) by Selfmadegod Records. It was recorded, engineered, and mixed in Palermo by the band’s long-time friend Silvio “Spadino” Punzo at Tone Deaf Studios, and mastered by Dan Randall at Mammoth Sound Mastering (IMPALED, TOXIC HOLOCAUST, IRON REAGAN, GHOUL). The artwork was created by Luis Sendón (NASHGUL, BRUTAL TRUTH, MACABRE, LOOKING FOR AN ANSWER).

One Response to “AN NCS ALBUM PREMIERE (AND A REVIEW): HAEMOPHAGUS — “STREAM OF SHADOWS””