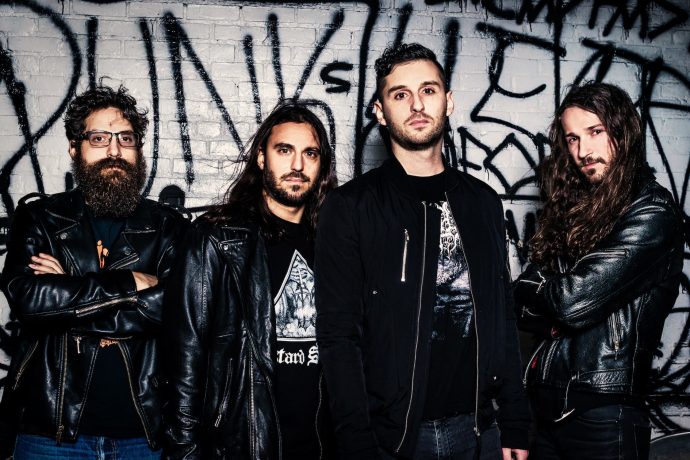 Lyrically, does this album focus on the grim turn taken in the past year of the world around us or is it more of an emotional response to it?

Themes of oppressive fascism are timelier now than they might have been before, but that never goes away. I wanted a response to the world around me. There is no way for it to not be political.

Which is more constructive than crying on social media about it…

In two years we might see things a little differently. We will wait and see, but it’s both what is happening and how I feel about it.

I have detected a hint of hardcore on the new album and your other releases. Is this an influence of yours?

I got my start in South Jersey’s DIY scene, with more metallic hardcore bands influencing us like Cave-In and Dillinger Escape Plan…

I didn’t get into Converge ’til later but my friends were into them. It was that type of music that I was listening to when I was learning to play guitar and drums, so it stuck with me even though I haven’t listened to it in years.

What are your plans for touring Europe?

The whole thing pretty much revolves around Roadburn. We got that gig first, which will be great, and then we began booking some smaller shows around it. We are playing with Ultha, who are amazing and also really cool guys. We have been in touch with them online getting to know them. So, making music with positive people — what else could you want?

What did you learn from touring with Mayhem?

Well, that was a while back so I might be a little fuzzy on it. In some ways it was just like every other tour in that you show up on time, load in, hang out, and play music. The scale of the stages we were playing on was different. It was also the only really big package tour that we have done. We are used to playing more intimate stages. It was cool seeing Mayhem play every night.

What are your thoughts on the current state of black metal in America?

I am not really as plugged into it as I used to be and try not to engage that much online. I try not to really invest too much mental energy in it, as it is something external that I can’t change, so I don’t have many opinions on it.

I think it’s cool that the scene doesn’t have to be a strictly underground secret anymore. There are people out there who probably think I am a horrible person for saying that but there’s nothing wrong with becoming more accepting of black metal being other things. It doesn’t have to look the same to everyone because it just doesn’t matter. I do have opinions of the direction it’s heading and I think it will be interesting to watch what happens over the next couple of years.

Something I do have some opinions about is the crossover between metal and politics. There has always been this contingent of metal that is conservative and thinks liberal politics are a sign of weakness, which is absurd. I wonder when and if these people are going to back-pedal once they see they are part of the system and have been supporting it all along. These guys, the right-wing metal fans who have been opposed to social change, they are going to have to come to terms that they have been supporting Christian fundamentalists this whole time, they have been pushing the conservative values of old men simply to be rebellious. They have always been part of the system, it just didn’t seem like it during the years of the Obama administration. How are they going to retract that in order to keep rebelling against the system?

So… I guess I do have some opinions about this after all.

Any plans to tour the States?

Right now there are only a couple of album release shows booked, but we are looking at what makes sense in regards to the other responsibilities we have with our lives and families as a band as a whole.