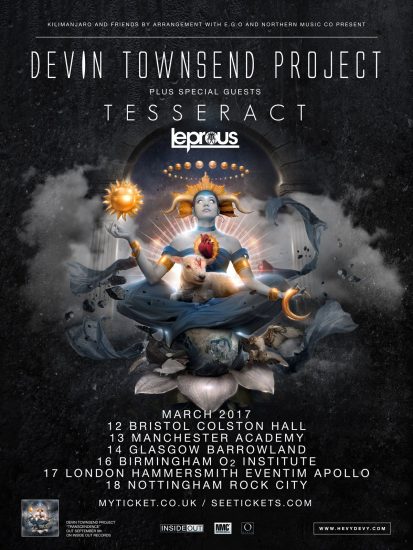 (Andy Synn attended the performance of Devin Townsend, Tesseract, and Leprous in Nottingham, England, on March 18th and files this report.)

Despite the fact that this site is called “No Clean Singing” we’re actually big fans of clean sung vocals here… well, in the right circumstances anyway.

No, the site’s moniker originally stemmed not from a blanket hatred of clean singing, but from Islander and co’s growing dissatisfaction with all the bands shoehorning clean vocals into their songs in a desperate attempt to appear more “accessible”, and therefore more marketable, at the cost of both their overall intensity and their underlying integrity.

I personally have a lot of love, and a lot of respect, for bands on the heavier end of the spectrum who are able to integrate and incorporate clean vocals into their sound in a way that feels totally natural. After all, it’s generally a lot more difficult to hold onto a melody and to hit all the right notes than it is to simply scream your lungs out atop a parade of blastbeats/breakdowns/bombastic riffs (not that I’m attempting to downplay the skill and strain involved in being a good screamer/growler).

So when a show like this rolls around, featuring three bands whose singers are all capable of knocking it completely out of the park (and practically into orbit) with their clean singing abilities, you’d best believe that we’re going to write about it.

Opening the evening were NCS favourites Leprous, who are on something of a roll these days following the increasing commercial and critical acclaim which each of their albums has garnered (although, it must be said, it’s still weird to see them as an “opening band” on a tour like this when their profile in Europe is so much higher).

Kicking off with a rousing rendition of “Foe” – all flamboyant vocals and hypnotic, off-kilter rhythms – the band’s hardcore contingent of fans down the front made themselves known almost immediately, although there were certainly more than a few bemused faces amongst the crowd who perhaps weren’t fully prepared for (or familiar with) the band’s particular brand of wonderful weirdness.

Which, as a friend of mine pointed out, shouldn’t be massively surprising. Although Leprous are definitely a real up-and-coming name, and more than a little famous in their own right in certain circles, much of Devin’s fanbase comes from a more mainstream background (that’s not an insult by the way) due to the wide-ranging appeal of his music, and they aren’t necessarily going to be as knowledgeable about bands outside of their usual circle unless they’re directly exposed to them in some way… such as by seeing them supporting Devin on his UK tour!

So while songs like the stuttering “Third Law” (which saw drummer Baard Kolstad continuing to prove he’s one of the best in the business) and the dark, electric grooves of “The Flood” were probably a little too out-of-left-field for some of the audience, the Norwegian quintet made sure to make full use of their limited time (and limited stage space) to put on one hell of a show all the same, ultimately winning over more than a few new fans by the end of their uniquely proggy performance.

Right from the start it was clear that the Tesseract boys were on top form. Slick, stylish, and utterly professional, the quintet had a frankly massive live sound and a very impressive light show, and delivered each and every track with the tightness of a band operating as one single unit.

Unfortunately that same sense of detached professionalism ultimately left me feeling somewhat underwhelmed by their performance this evening.

I don’t doubt that the band have probably never done a bad show… but, by the same token, it’s hard to pinpoint anything to be particularly excited by as, despite some valiant efforts by the band’s undeniably talented frontman, the songs just didn’t seem all that dynamic or interesting, all tending to stick to the exact same tempo, delivering the same mix of interchangeable poly-rhythmic pseudo-riffs and twinkling ambient parts, while even the vocals themselves seemed oddly disengaged from the music behind them.

Gah… I hate being negative about bands, I really do, and it’s not like a lot of the audience weren’t really enjoying themselves (the band clearly had a solid and vocal fanbase in attendance), but my overall impression was definitely one of style over substance and, while I can see the appeal of their sound to an extent, ultimately they came across as a much more bland and inoffensive alternative to their more distinctive touring partners.

But, as I said before, the group still acquitted themselves well enough (although the flashy light show didn’t fully disguise the rather static and subdued nature of the band onstage) and, by and large, the audience absolutely ate up every single track, even if the overall experience seemed to lack any real edge or excitement to it.

Prior to this evening’s show I was lucky enough to sit down with Devin himself for an off-the-cuff discussion on behalf of Terrorizer magazine, where we ended up chatting about everything from his newfound love of exercise and meditation as a way to centre himself, to the experience of writing and publishing his autobiography “Only Half There” (which is a fascinating read, btw), and everything in between.

As a result when Devin and his cohorts – bassist Brian Waddell, drummer Ryan Van Poederooyen, guitarist Dave Young, and keyboard player (and lighting guy) Mike St-Jean – took the stage, opening with a rousing rendition of “Rejoice” from 2014’s Sky Blue, I felt like I had a much better handle than most about what he must be feeling up there, a mix of anticipation and trepidation, excitement, and a bittersweet longing for home.

After all, this was the final date of a lengthy seven-and-a-half-week tour for the group, and although they were all clearly in good spirits (and surprisingly good shape), there was certainly the sense that tonight’s show was a well-deserved victory lap for a group of guys who had been on the road, away from home, friends, and family, for a significant amount of time.

The flip-side of this of course is that everyone in the band clearly wanted to make the final night of tour one to remember, with each member clearly bringing their A-game (not that you’d expect anything less) throughout numbers like the progtastic “Stormbending”, the shamelessly sentimental “Where We Belong”, and the triumphant “Supercrush!”

Now, with so many songs/albums to choose from, it’s impossible for any Devin Townsend set to cover all the bases, but tonight’s show still managed to pull tracks from Sky Blue, Ocean Machine, Transcendence, Addicted!, Epicloud, Deconstruction (which also involved the use of the world’s most OTT Metal guitar ever), Z2, and Accelerated Evolution, so there was very little to complain about really in that regard (although I felt like “Higher” wasn’t the best closer… particularly following a phenomenal run-through of “Kingdom” and an intimate acoustic rendition of “Ih-Ah”).

In the end it was great to see Devin and his Project/Band in such a stripped-down environment, without all the bells and whistles, puppets and paraphernalia, as this allowed them to focus purely on the music, playing together with the natural flow and finesse that you only get when a band are true friends, through and through.

And, really, what more could you ask for than that?