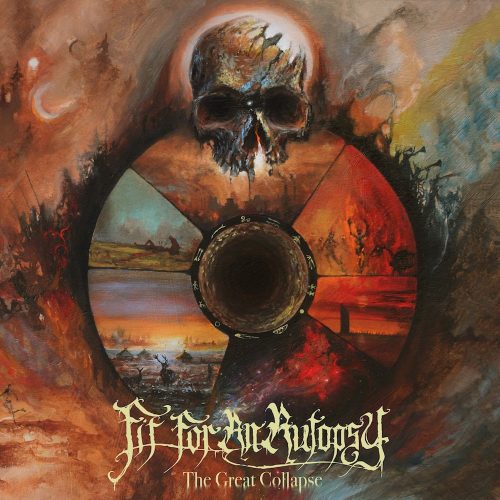 (Andy Synn reviews the fourth album by New Jersey’s Fit For An Autopsy.)

It’s a little-known fact, but we actually quite like Deathcore here at NCS… at least, when it’s done well.

After all, our purview has always been to write about Metal, in all its forms, regardless of style or sub-genre. As long as it’s good, as long as it has the passion, the power, and the energy we’re looking for, we’ll write about it.

It doesn’t matter if the band is big or small, new or old, mainstream or underground. Black Metal, Death Metal, Prog, ‘core, or Post-… if the quality is there we’ll do our darnedest to cover it.

Which leads us, nicely, to the new album by New Jersey noisemongers Fit For An Autopsy. 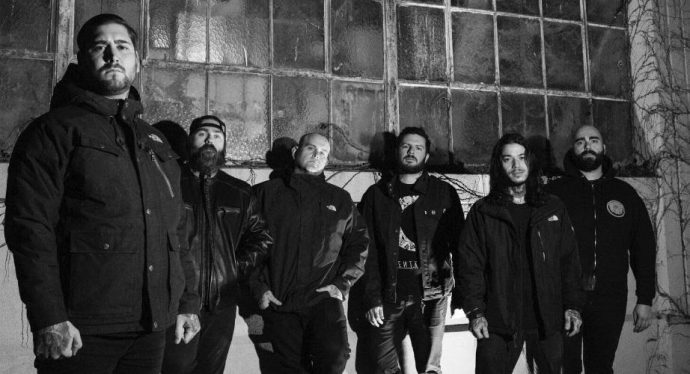 The Great Collapse, the band’s fourth full-length release, has been receiving quite a bit of buzz recently, and for good reason, as it’s a prime cut of quality Deathcore muscle, which offers a potent mix of both brains and brawn.

And although it rarely threatens to break the mould (the sonic similarities to many of their peers, particularly Impending Doom and Whitechapel, are hard to deny, and those less familiar with the genre could easily mistake a song like “Too Late” for an unheard offcut from Our Endless War), what it might lack in originality it largely makes up for in unremitting intensity.

Of course if you’re a staunch opponent of all things ‘core, then tracks like “Iron Moon” and brutally infectious opener “Hydra” are unlikely to change your mind.

Packed to the gills with bone-crunching, down-tuned riffs, chunky, chug-heavy breakdowns, and bellowing, testosterone-infused lyrics (“Cos when you cut off the head / FUCKING TWO GROW BACK!”) perfect for displaying in block-capitals on your fresh new wifebeater (though, truthfully, is that any more ridiculous than a grown-man growling “Violent climax / Surging serum on my skin”?), these songs display the band at their punishing, pulverising best, all guts and gusto and frothing machismo delivered without restraint or remorse.

In other words, they’re just an absolute tonne of fun to listen to. 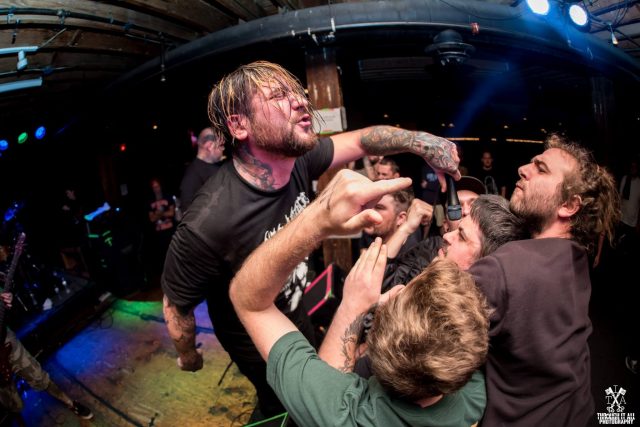 Now if this were all that The Great Collapse had to offer, I’d be happy to leave it there, and tell you all to go out and grab this album right now. But that would be only half the story.

No, to get the full picture of this album we have to confront the whale elephant in the room… the big, Gojira shaped one.

Because, and let’s be frank about this, there’s a distinct difference between taking influence from a band, and lifting large sections of their sound wholesale, which is kind of what FFAA have done on a number of tracks here.

Don’t get me wrong, as much as songs like “Heads Will Hang” and “Black Mammoth” kick a significant amount of ass (the latter in particular possessing both a particularly striking chorus and an interesting socio-political message) , they copy so much from the fearsome French foursome – from the same lurching, slightly discordant riffing style and nearly-identical layering of harsh and semi-melodic vocals, all the way down to mimicking their now signature string-scrapes – and do so in such an utterly shameless fashion, that these tracks are half-way to being covers, rather than original compositions.

And while both “Terraform” and the moody “Empty Still” strike a much better balance, such that while the Gojira influence is still prominent, it’s not quite as overwhelming, the overall feeling I’m left with is that the NJ sextet have gotten a little too carried away in their infatuation with everyone’s favourite arena-dwelling activists this time around, and ended up walking a very thin line between inspiration and outright plagiarism.

But… and here’s the kicker… that shouldn’t stop you enjoying this album. I certainly do.

In fact I’m probably going to be jamming it (particularly “Hydra”, “Black Mammoth”, the gloomy “When The Bulbs Burn Out”, and scorching closer “”Spiral”) a lot over the next 8-9 months.

It’s just a slight shame that the album’s biggest strength, its valiant attempt to stretch out beyond the typical confines of Deathcore as a genre, is also potentially its biggest Achilles’ heel.

The Great Collapse is out now via Good Fight and eOne Music and is available on iTunes and at Good Fight’s online store.

2 Responses to “FIT FOR AN AUTOPSY: “THE GREAT COLLAPSE””