I have a hypothesis, not one supported by statistical evidence, only by anecdotal observation: All of us have attractions to specific styles of music that ring the chimes in our heads. We know what we like, we gravitate toward it. But we are also open to new sounds that may ring different chimes, in ways we couldn’t predict, and the most surprising revelations can turn out to be the most compelling and the most memorable.

The song we’re premiering here had that completely unexpected effect on me. It may have that effect on you, but I have no way of knowing that. It’s a musical dice roll, one that I hope will come up sevens for you, as it did for me. It’s the most unusual piece of music I’ve heard this year, and one of the most striking.

The name is “Stillborn Knowledge“, by the Ukrainian band White Ward. The song is extracted from the band’s debut album Futility Report, which will be released by Debemur Morti Productions on May 12th. 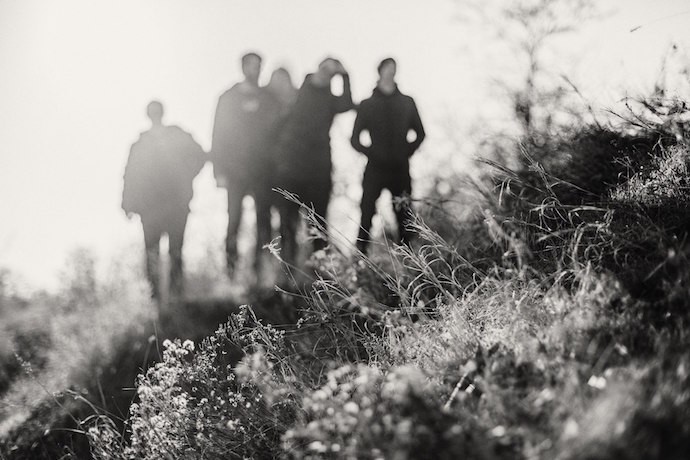 That this is the band’s debut album is barely short of astonishing. What they’ve done here is a rare tightrope walk across a chasm, one that ends in cheers instead of gasps of horror at the long plummet to a gory death.

“Stillborn Knowledge” is eight minutes of constant fascination, a changing tide of black metal and jazz, a dark ode of destruction and soulfulness that leaves a deep mark, like a searing brand on a quivering hide.

The band exert their grip from the very beginning, with indigo-shaded abrasive riffing, hammering drums, and a pulsing bass rhythm. The drums begin to blast and the guitars begin to swirl and slash, while the voice hurts like a raw wound.

A scintillating, vibrating melody rises up, joined by the slow, moaning sounds of a saxophone. The rhythms change to a a jolting pattern, and then everything stops. Slow piano chords clang over a techno beat, joined by a deep bass line and chiming notes, with the sax coming in as final layer — slow, smoky, and soulful.

When the whole band return in a mid-paced scavenger’s tale, the sax is still there, along with more abrasive riffing and a prominent bass pulse. The melody is somber and mesmerizing… but the rhythm changes again, a hard rocking beat, the guitars jabbing in a way that pushes you off-balance… and then comes another saxophone solo that’s as fiery and soaring as it was once slow and soulful.

More changes: the drums stop, the rippling guitar melody returns, and then there’s nothing but slow piano keys, the bass joining in, and the saxophone again going solo, slow and smooth as honey.

Sometimes the press propaganda gets it exactly right: “Furious and intimate, exciting and intriguing, Futility Report stems from a thoroughly modern vision, an innovative interpretation of Extreme Music which breaks down established codes whilst simultaneously deep-rooted in the obscure history of Black Metal.”

White Ward was formed in 2012, with their origins in the dank earth of raw depressive black metal, though they’ve moved far beyond those roots. They claim inspiration from the books of H.P. Lovecraft and I.M. Banks (the late Scottish author Banks happens to be one of my favorite writers, and this is the first time I can recall a metal band linking their works to his). Here’s the line-up:

The lyrics were composed by Alexey Sidorenko. Vladimir Bauer and Alexandr Smirnov also contributed to the compositions. The album was mixed and mastered by Alexey Nagornykh. The artwork was created by Olia Pishchanska.

The video for “Stillborn Knowledge” compiles photographs taken by Olia Pishchanska, which are part of the CD booklet.

To pre-order the album, avail yourselves of these links: