(We present Andy Synn’s review of the new album by Nightbringer.)

I doubt there are many among our readers (though undoubtedly there will be some) who would disagree when I say that the Black Metal scene today is in rude health.

From those early seeds sown by a small clique of disaffected Norwegian youths the genre has grown and evolved in ways that its progenitors could never have imagined, spreading out to take root in the hearts and souls of like-minded individuals across the globe and spawning new offshoots, new interpretations and new innovations, which have stretched the boundaries of the style beyond all expectations, while still remaining true to that central tenet of “do what thou wilt”.

But for every innovator there are a thousand imitators, and I do sometimes get tired of seeing yet another bunch of earnest amateurs playing dress-up and pantomiming the actions and aesthetics of bigger, better bands, while offering little (if anything) new or inspiring of their own.

Thankfully Nightbringer are, and have always been, a cut above the rest. And every album, every song, every hellish, skin-stripping riff and vile vocal incantation, is delivered with the righteous fury and unwavering conviction of the true believer. 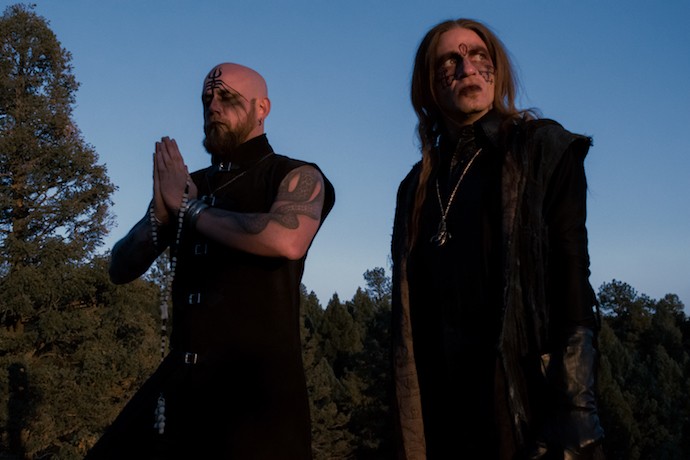 Of course conviction can only take you so far. You have to have the vision, the confidence, and the skill to back it up.

And Nightbringer have all that, and more. They’ve always been one of the most ferociously aggressive, technically adept, bands on the scene, and their new album only serves to cement this fact even further.

Whether it’s the cataclysmic audio fury of opener “As Wolves Amongst Ruins”, the torrential tumult of “Midnight’s Crown”, or the baleful, brooding, “Let Silence Be His Sacred Name”, Terra Damnata is the sound of a band in their absolute prime, with every song unleashing a seething torrent of scalding dissonance and insidious melody, scorching distortion, and barbaric, blasphemous invective, all of which combine to produce an overarching atmosphere of creeping, crippling dread.

And whereas before they’ve been accused, and not unjustly, of drawing things out unnecessarily at times, extending songs (and albums) ever so slightly beyond their natural lifespan, that’s not the case here, as there’s not a moment, not a riff, not a song, which feels anything less than absolutely vital.

Granted, if I have one minor criticism of the album it’s that the mesmerising melodic menace of “The Lamp of Inverse Light” feels more like an album closer than “Serpent Sun”, which is not to disparage the gristly intensity of the latter, but merely to suggest that switching the track order here would perhaps have improved the flow of the album even further.

Or perhaps not. Who knows?

What I do know however is this: Terra Damnata could very well one day go down as a landmark album in the ever-expanding, ever-evolving annals of Black Metal, and may indeed come to be considered the band’s magnum opus.

Time will tell if I’m right.

Terra Damnata will be released on April 14 by Season of Mist.