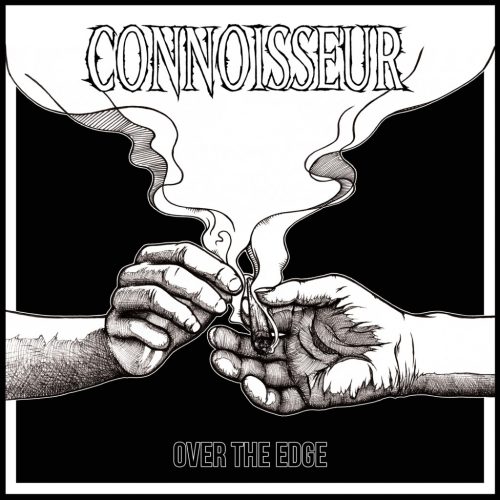 Based on past experience with Connoisseur, I had an inkling of what was coming when I first listened to their new album, Over the Edge, but you may not. I’ll tell you up-front that Connoisseur are one of the biggest musical head-fakes on the planet. There’s so much weed in their song titles that you can get a contact high just from reading them; along with the cover art, they all just giggle “droopy-lidded stoner metal” at you. But if you’re expecting music to get hazy with, you’re in for a big surprise.

Over the Edge is being released today by Tankcrimes, and we’ve got a full stream of the album for you… along with a few words of preparation for the unsuspecting listener. 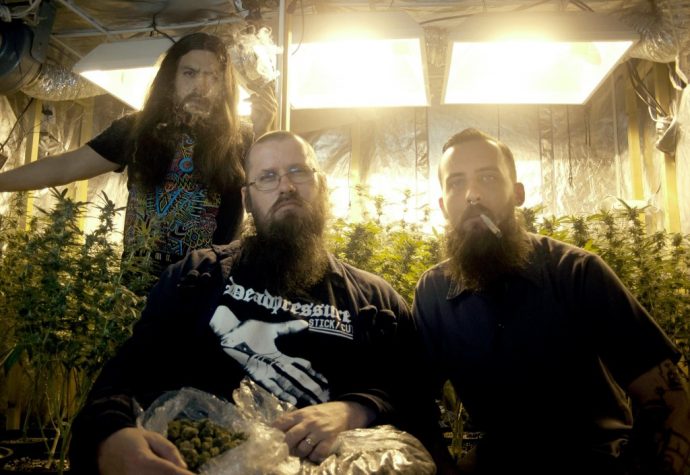 You might expect a deep, heavy bass tone and python-thick riffs from the weedian outward trappings of the songs, but compared to the expected girth of stoner metal riffage, Connoisseur’s tone seems a few orders of magnitude heavier, or maybe it’s just because they so often deploy their instruments as implements of demolition and destruction. No warm, fuzzy hugs here — just the opposite, in fact.

There’s plenty of good-natured hilarity sprinkled through the lyrics, as well as healthy doses of high-energy romping, but even at its most animated, there’s an edge of red-eyed violence in the music. And much of the time the music is just unmistakably, catastrophically brutal.

There’s no clean singing on this album either. You either get raw, larynx-lacerating eruptions that are part punk fury and part banshee derangement or you get predatory death growls. You won’t get cozy or comfortable listening to those voices, and no matter how lit you might be when you listen to the album, it’s not likely you’ll drift off at any point either.

Part of the reason why the album keeps its grip on your throat is that Connoisseur don’t stay in one gear for very long at a time — and the songs themselves are compact affairs as well, most of them in the one-to-two-minute range. The music moves from bracing gallops to punk-fueled rampages, from mid-paced bunker-busting juggernauts to grindcore-paced furies of supreme destructiveness.

And to be clear, Connoisseur switch gears within songs as well as between them. A prime example is “Plague Mask” (one of the few songs without THC soaked in the title). It begins as a pugnacious brawler, but becomes a dismal, ghoulish crawl of maggot-infested doom. Something similar happens in “Live To Smoke”, which launches with a live-wire drum rhythm and a light, pulsing guitar motif, but eventually turns massively heavy, implacably crushing, and tarred with doom and desolation.

Anguish and anger cohabit in these songs like old friends scavenging in a bleak and blasted war zone. In the instrumental closing track, “Cashed Out”, it’s life itself that seems to have run dry and checked out, with a truly bereaved guitar melody surfacing from the abyssal depths of ominous droning sounds.

I’m not saying you won’t enjoy this album if you’re a fan of stoner metal, but it hits very hard on multiple levels. It might be better not to fire up until it’s over, to help ease you back down from the experience. Either way, prepare to get wrecked.

Over the Edge was recorded by Greg Wilkinson at Earhammer Studios (Iron Lung, Brainoil) and mastered by Dan Randall at Mammoth Sound (Spazz, Ghoul). Tankcrimes is releasing the album on LP, cassette, and digital formats TODAY. Purchase links for each one are below:

2 Responses to “AN NCS ALBUM PREMIERE (AND A REVIEW): CONNOISEUR — “OVER THE EDGE””