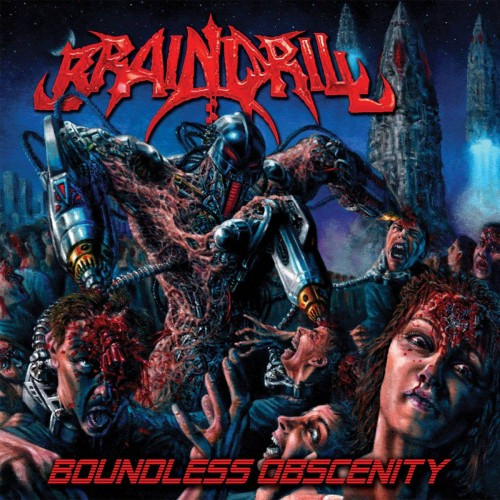 (Austin Weber introduces our premiere of a video by the electrifying Brain Drill from California.)

At this point, most people know Brain Drill and have long since formed an opinion either for or against the band and their frenetic and over-the-top style of technical brutal death metal. As such, I’m not here to preach at length to the unconverted, but I will say this: I think last year’s comeback album from the group, Boundless Obscenity, was by far their strongest effort to date.

In particular, I felt the band really stepped up their game, both rhythm-guitar-wise, with tastier, more complex riffs, and also in the songwriting department. Since it was the band’s first release as an independent band since parting ways with Metal Blade Records, it didn’t get as much press as it should have, though we certainly covered it here at NCS more than once! So we’re here today to premiere a new music video for their song “Infinite Oblivion” to give the band another boost and spread the word about music that deserves more attention. By far my favorite song on Boundless Obscenity, “Infinite Oblivion” is a serpentine sonic speedball, one aided by occasional orchestral flourishes, a first for the band. True to the band’s name and ethos, “Infinite Oblivion” burrows into one’s flesh with ease, spiraling deeper and deeper, tearing and destroying anything in its path.

The music video for it is largely a performance-style video, though it does intersperse that with footage of a man driving around, his aim unclear until the very end of the video, when all becomes clear….

If you missed out on Boundless Obscenity last year, I highly suggest giving it a shot — you just might be surprised at how killer it is from start to finish. Give in to brutality, allow Brain Drill to sweep you off your feet, and then bury you six feet under in an onslaught of relentless blastbeats, eye-popping guitar work, and possessed vocals.

Stream and buy the album:
https://braindrill666.bandcamp.com/