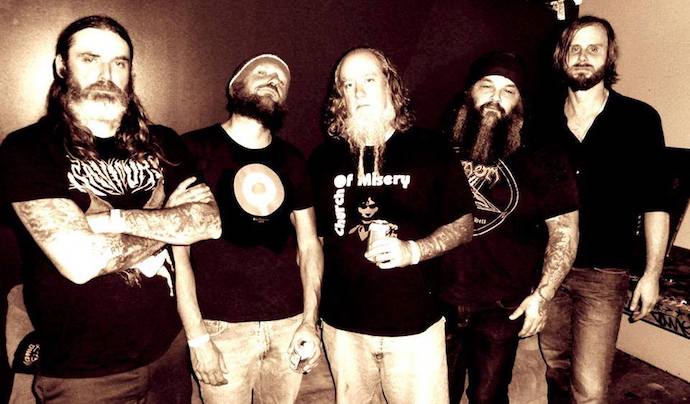 (In this interview Comtrade Aleks checks in with guitarist Tommy Southard of New Jersey’s Solace.)

This dirty, angry and literally possessed stoner crew is known because of its charged and uncompromising delivery and damn vivid shows. They’ve shaken the New Jersey scene since 1996 and since then have achieved some recognition with three full-length albums, a few smaller releases, and a lot of live gigs.

Solace’s latest work “A.D.” was released in 2010, and that’s okay since the band’s members also play in more sinister and sludgy outfits like The Disease Concept, Social Decay, and Chrome Waves. They’re busy men, and they know well how to play loud and heavy.

I hadn’t heard anything new from Solace for awhile and was worried a bit. As result I got in touch with Tommy Southard (guitars) and he patiently answered my questions, helping with this retrospective interview.

Hi Tommy! Solace was formed in 1996, but the debut full-length Further was released 4 years later. What slowed your pace to Further?

We did start in ’96 and put out a few tracks on compilations and a 7-inch before Further. Further was all recorded in 1999 so we were busy and active at the time playing out and recording, and we also were going through a lot of drummers at the time. So that delayed us on getting the full-length out.

What did you want to put in this album when you started the recording of these songs?

We had no real preconceived notions about how we wanted to sound. We just wrote riffs and songs that we were into at the time. We just wanted to worship at the Altar of Sabbath. 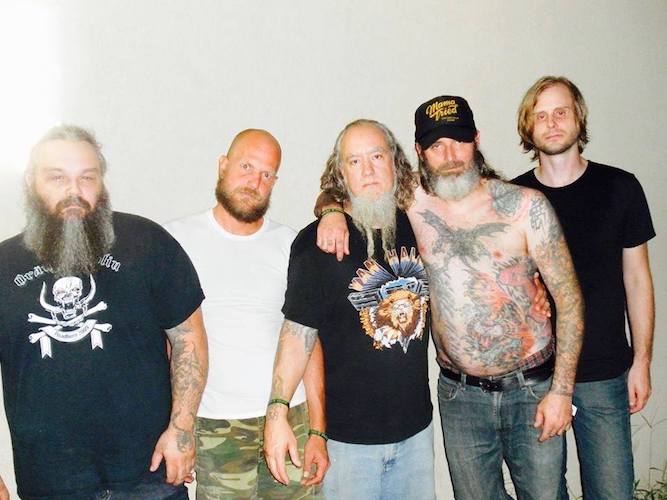 Man, you have that loose sound, a bit of dirt in it, and a handful of dirt in the lyrics. What’s the band’s general message?

No real “message”, we’re just a bunch of dirt bags from New Jersey who like rock and roll!

Drink beer, party, and rock out with yer cock out! FTW!

But I bet that it’s difficult to keep on drinking through all these years in the same scale. So speaking about “King Alcohol” – is it just part of the image now?

Ha! Not at all. We have no “Image”, we don’t go for that shit. We are who we are. We wear the same clothes in real life we wear on stage, we are not concerned about any image at all. None of this is an act. As we have gotten older we just drink better beer and good whiskey now instead of any cheap rot gut that we drank as kids. We are much more into craft beer! hahaha!

Solace is based in New Jersey. How much of its influence is in your songs?

Not much I think? I don’t think we sound like other New Jersey bands. And N.J. where we are from is really a tourist / beach town. That has no influence on us at all. We hate all that shit.

Usually Solace sounds pretty angry, sometimes bloodthirsty, sometimes depressive. What role does the band play for you? Is it a management course for your anger (and other negative states)?

The name of the band says it all…. We find “Solace” in our music. We have not lived some happy-go-lucky lives. We’ve all had struggles and bullshit in out lives, so I guess we use the band as a vehicle to vent.

When the time came to visit the studio and do the songs which became your second album 13, did you want to change Solace’s sound? Or was it already good enough to play further the same way?

No real decision was ever made to change our sound at all. We have never been concerned about sounding any certain way. We write what we write and that is it. We are not catering to anyone or any scene. We do this for ourselves above all else. It’s great when people like and appreciate what we do, but if no one ever heard of Solace we would be drinking beer in someone’s basement jamming out these tunes regardless.

You played two covers for the 13 album: one is Pentagram and another is Agnostic Front. Can you say that Solace is a mix of both of these bands? What kind of ingredients do you add to your sound?

We all come from different backgrounds and all love many different styles of music, from hardcore and punk, to metal and psych rock. We just take little pieces of all of that and throw it through amps and what happens is what happens.

Lot’s of all of the above! We certainly add elements of all the past bands we were in. We have done hardcore style songs, and some of the early Solace riffs are things I wrote in the Godspeed days but never went anywhere. I always wanted Godspeed to sound a bit more like the way Solace sounds but we had a VERY different singer. We wrote a bit more to fit his style of singing. A bit more Metal, a bit more Punk.

By the way, how did you lure Scott Wino on board to record a few tunes with him for the songs “Indolence” and “Common Cause”?

We are huge Wino fans. I wrote the riff to “Common Cause” and I said to myself, that sounds a bit like something off of Church Within by The Obsessed. I had a friend, Frank Wombat, who was in touch with Wino. I don’t think Wino was doing much at the time and we asked him to come and record with us.

He was great. He drove up from the Maryland area all the way to New Jersey and spent the day in the studio with us. We tried to buy him dinner and give him gas money and he wouldn’t take anything from us. It was an honor to work with him and we have remained friends ever since.

There were 7 years between 13 and Solace’s third record, A.D.. Didn’t you have a goal to leave full-lengths behind you regularly as milestones?

Of course we would certainly like to have put out records more regularly, but life gets in the way sometimes. We do not make a living off of this band. We all work day jobs and have wives and children, and some of the members have been much more “absent” than others. Shit happens. Regardless, I’m very proud of the albums we were lucky to make.

You recorded A.D. with twin guitars. How was that in the studio? How did you decide to do this turn and enforce Solace’s sound?

When we finally found Justin Daniels and he started playing with us he would do things behind the riff I wrote and I would be like “YES!”, do that 5th or do that harmony. It was finally the fit I was looking for after all those years.

This album has the coolest artwork Solace has ever had. How did you make Paul Vismara do it? Did you discuss details with him?

Paul has been a friend of mine since the long-gone days of stonerrock.com; I think Paul might have said he wanted to do some art for us, and all I told him was “Hieronymus Bosch” and he knew. Everything else all came from his mind.

“A.D.” was released in 2010, and nothing has been heard from your camp since then. Is the band still alive?

Alive! Resurrected from the dead once more. We’ve picked away at some of the old festering wounds and got rid of some of the dead skin and are healing and moving forward. We’d just released a new 2-song tape — “Bird Of Ill Omen”, which is the first song with our new singer Justin Goins, and our version of the classic Electric Funeral” from The Sabbs. And we will be doing a version of “In The Flesh” by Pink Floyd for an upcoming remaking of the entire “The Wall” album being put out by Magnetic Eye Records later this year. And we have a few shows lined up for 2017 as well. We are trying to give this shit one more push before we all get too old to do this anymore!

Where did you find Justin? What’s his background?

Our bass player was working in Atlantic City at the AC airport as an electrician at the time and found Justin working in an adult bookstore. True story!

Does “In the Flesh” give an impression of the direction the band will take with the next full-length record? How soon do you plan to release Solace’s fourth album?

I don’t think us doing “In The Flesh” really indicates where the band is headed. It’s just a cover song. We will just go where the riffs take us. Who knows where that will be. We already have over an album’s worth of material written. It’s just down to fine-tuning things and finding the time to record. So there’s no real timetable for a new release. We have never been too concerned about getting an album out every year or as soon as possible.

Have you felt all this time that Solace is a band in demand? How often have you played live since the “A.D.” release?

We are still and have always been doing this for ourselves first. If people are into it and come to shows and buy our new stuff that is great, and of course we want that, but what else are we going to do? Go fishing? Sit on the couch and watch TV? I hope we are still in “demand” — that would be great, but if not we will keep going until it’s no longer fun or ’til we start dying I guess.

And what about this Magnetic Eye project, covering “The Wall”? The album consists of 26 tracks. How did your participation come about?

This is their plan. We were asked if we wanted to be a part of it. We chose a song and we will record it. Simple as that.

Tommy, why do you always have problems with drummers? Did the first four drummers get out of Solace alive?

He’s alive somewhere driving a motorcycle somewhere in the Pine Barrens of New Jersey with The Jersey Devil!

Thanks for your time Tommy! Any words for our readers?

If you made it through this, thanks for taking the time. We’ve been doing this for a long while now and it’s cool to know that some people still give a shit. And thanks for the interview!