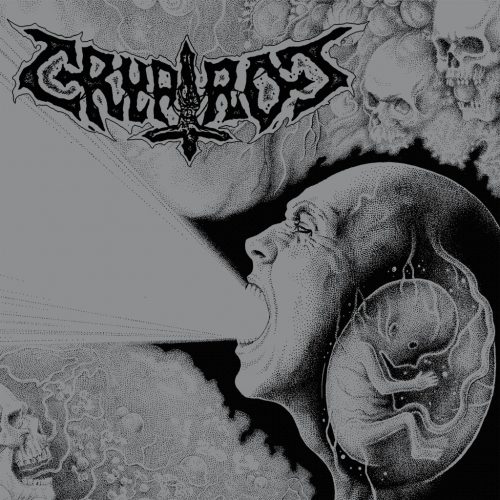 Crypt Rot are a relatively new Ohio band whose line-up includes current and former members of such groups as Homewrecker and Scorched (with whom they’ll be releasing a split later this year). Their debut album Embryonic Devils will be released by Southern Lord on April 28th, and today we’ve got a full stream with which to violate your earholes.

The music on the album is a head-wrecking horror, but the album title could be misleading. These are not embryonic devils. Both Crypt Rot and their songs are full-grown, fully formed devils with a monstrous capacity for spreading pestilence, destruction, and an atmosphere of paranormal terror and derangement. 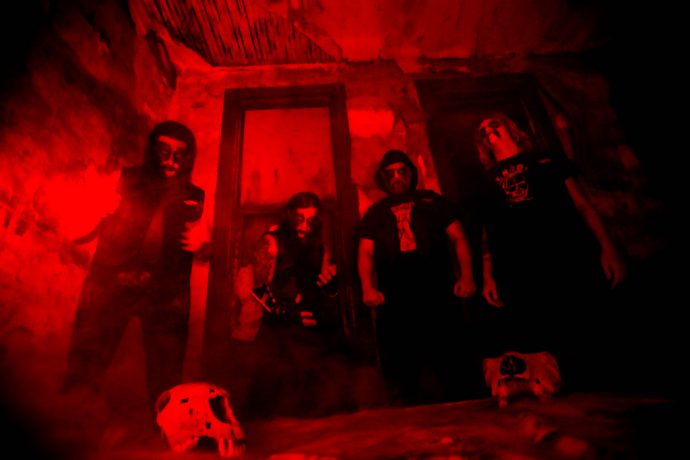 Because I’m a slobbering, slavish fan of old school Swedish death metal, Embryonic Devils lit me up like a gasoline-soaked torch. The riffs have that massive, corrosive, toxic sound that one associates with the style, and with the aid of a skull-cracking rhythm section, they’re used to hurl the listener into a war zone, mixing barrages of automatic weapons fire and crushing tank attacks — and occasionally devolving into a doomed stagger.

Punk and hardcore influence the music as well, with d-beat romps and brutish hammering scattered among the tracks. “Coffin Birth Post Mortal Fetal Extrusion”, in particular, includes a segment of pile-driving power that’s an irresistible headbang trigger (and that’s not the only time Crypt Rot pull that trigger).

But there are also aspects of the music that are truly weird, qualities that make it a hair-raising and even queasy experience. For one thing, every song is preceded by a brief “Segue”, each one of them a collection of sounds (and sometimes grotesque voices) that are frightening, even though it’s hard to define exactly what you’re hearing.

For another thing, vocalist/guitarist Ryan Sposito and drummer/vocalist Matt Izzi emit a truly ghastly cavalcade of inhuman sounds from their throats, all of those sounds boiling with murderous insanity or wrenching torment. There are also some clean male vocals and some female vocals (by Allie Dioneff), used sparingly, but used in ways that amplify the atmosphere of horror that blankets the whole album. And for a third thing, the bursts of soloing in the songs are either festering and diseased or completely freakish.

Crypt Rot also have some surprises in store for you, showing a different side to their sound that turns out to work very well in the flow of this compact album. Roughly The first half of “Pit of Morbidity” is a slow instrumental, a duet of acoustic and electric guitar that’s melodic, yet still quite morbid, and the closing track “Internal Organ Fest” includes another unexpected acoustic interlude that’s somehow both lilting and melancholy.

And so, in a nutshell, Embryonic Devils will brutalize you, energize you, and fill you with skin-crawling dread. Enjoy the entire harrowing and invigorating experience below. To pre-order on red or black vinyl, visit this location:

One Response to “AN NCS PREMIERE: CRYPT ROT — “EMBRYONIC DEVILS””