Abkehr is a reclusive duo from northern Germany, a new entity who are rising from the shadow lands of black metal with a debut EP named In Asche. It will be released on May 19th by Sentient Ruin Laboratories. The EP consists of four impressive tracks, one of which premiered at CVLT Nation not long ago, and we now bring you another one.

The tracks are unnamed, identified with Roman numerals, and the one we have for you is the opener. It proves to be an unsettling but charismatic way to begin In Asche. 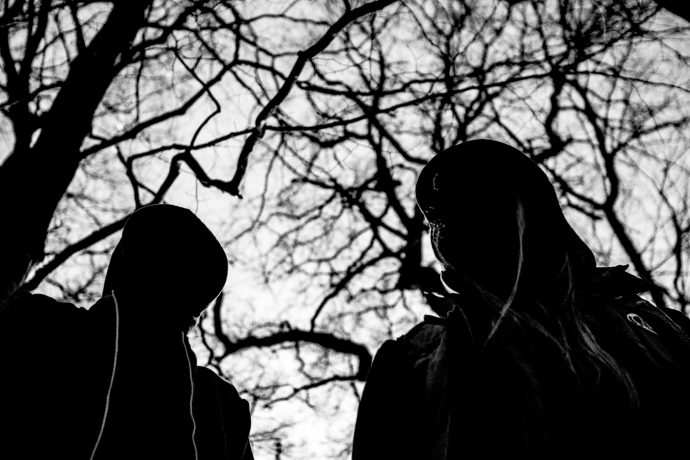 “I” succeeds in combining purifying flames and a mystical, mysterious atmosphere, with roots that connect with black metal played the old way (or at least a particular old way). It feels like a visit to a shadow realm of sorcery and savagery, the music both ruthless and chillingly strange.

The band set the stage with the slowly swelling sound of a swirling and abrasive ambience punctuated with distant detonations and a spare, dismal melody rising up through the abrasion. When the song really takes off, in a flurry of drum blasting and a cloud of venomous riffing, a preternatural melody soars and drifts high above. The effect is to generate an ominous and spectral aura combined with viciousness — and the vocalist’s caustic snarls and poisonous shrieks are certainly vicious — with the intensity magnified as the lead guitar melody writhes in a tormented delirium.

A bloody grim and hopeless picture is painted, yet the song is as mesmerizing as it is battering and ravenous. And the entire EP proves to be just as electrifying. Abkehr is definitely an impressive new discovery that we hope you’ll like as much as we have.

Below, you can check out both “I” and “II” from In Acshe (the track that premiered at CVLT Nation). In Asche can be pre-ordered from Sentient Ruin here: