(Wil Cifer wrote this review of the new album by Loss, which will be released by Profound Lore on May 19.)

The Tennessee mongers of funereal doom have returned with a long-awaited album. This one has been years coming, and the growth made since their first album is evident. While some things have changed, the core of what you might have liked on Despond is present, but the production is much fuller and shows they have gone the extra mile to expand their sound.

I personally came across this band when they were opening for Agalloch and was struck by the clean guitar tone that uttered out such sad phrasing. Those sounds are intact but the tones sometimes shift into something heavier, yet they still retain the sonic properties. 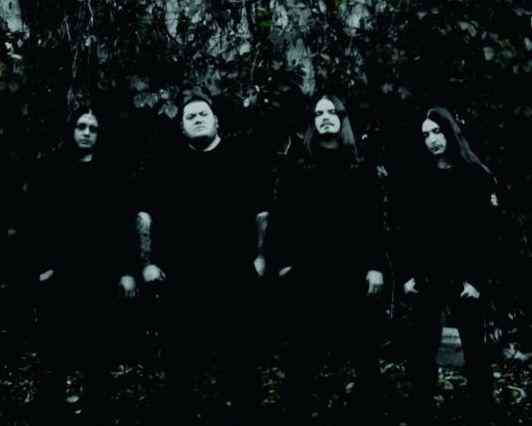 The guttural gurgle of vocals are also accounted for, though more vocal colors have been added. A more scathing, higher-pitched, black-metal-like snarl explodes out of “The Joy of All Who Sorrow”. The differences include some of the uglier sonics in the chord progressions, where the first album found the guitar in a more mournful melodic longing. This first song even builds into something almost black metal.

The mood is closer to Despond on “All Grows On Tears”. The melodies weep and the more metallic elements that Billy Anderson has dialed up are not as in your face. It accelerates in a more black metal picked section before the guitar trades places with the drums, allowing the double-bass to speed up beneath the rest of the song.

Their trademark sound of a lingering clean guitar melody resurfaces in a more dynamic fashion in “Naught”, which still gives me everything I want from this band.

The vocals go into a higher nastier rasp. Things get darker and take on a more elegant creepiness in “The End Steps Forth”, with a pipe organ following a piano intro. The vocals possess more of a breathy chant than a growl here. This song serves as almost more of an intro to the lush title track that only flirts with more delicate guitar before beginning to build around the two-minute mark. Toward the end of the song, clean vocals come in; they are a low goth-like baritone. “Banishment” is like a murky death metal interlude with a sample running through it as the growls roar out from what feels like an angrier place.

“Death is All” goes into the more introspective melancholy and finds Loss locked into the sound they now own. This one builds into greater sonic heaviness with touches of black metal ugliness counterbalanced by more melodic guitar textures. The lower goth-like vocals also make another appearance at the climax of this song.

Horizonless is a triumph by the band, and everything I can want out of this brand of doom. If you are a fan of funeral doom, it’s been awhile since we have gotten an album this glorious.

One Response to “LOSS: “HORIZONLESS””