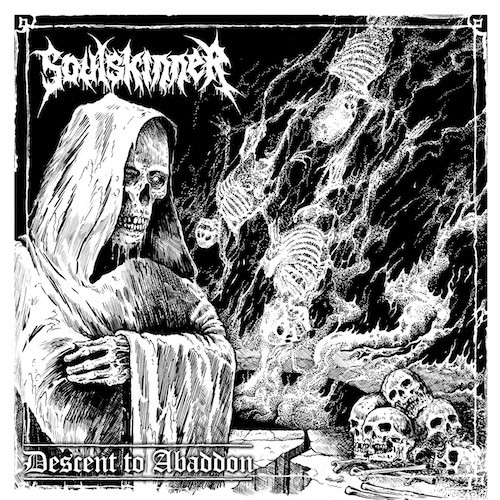 Soulskinner is a Greek death metal band with a storied history, one that stretches back to 1997 when the band was formed under the name Terra Tenebrae. Although line-up changes have occurred, the band is still anchored by vocalist Gothmog and guitarist Bill Zobolas (“EL“), both of whom have also been fixtures in the ranks of Thou Art Lord, and for their new fourth album they’re joined by drummer Kostas Savvidis, guitarist Spyros Triantafyllou, and bassist Costas Analytis.

That new fourth album is Descent To Abaddon, and in advance of its May 22nd release by Xtreem Music, we have a stream of the entire album for your enjoyment. 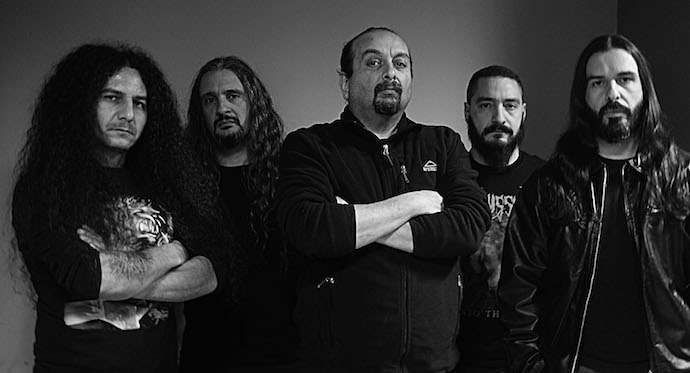 As you will have gathered from the preceding paragraphs, Soulskinner’s personnel are experienced musicians, and it shows in their mastery of the ways of unholy death (metal), and in the variations among the songs on the album.

This is death metal in the old sense of the term, music with an oppressive atmosphere redolent of pestilence, horror, and inexorable doom. But while the music is almost never less than gruesome and evil, featuring heavy use of grisly tremolo riffing and dark atmospherics, a trip through the album is a dynamic and involving experience.

Songs like “Soul of Death”, “Chorus of the Initiated”, “True Bliss”, and “Murder” are racing rampages; “Fracticide” decelerates from d-beat rhythms to a pace that brings to mind a moaning, stalking beast, while “Nemesis” is slow, staggering, and saturated with the ichor of doom and decay; the latter song also includes a bereaved melody voiced by a guitar that sounds like a grieving violin.

In addition to displays of fleet-fingered guitar pyrotechnics (see especially “The Fall”), the songs also frequently include beautifully executed melodic solos, and the band’s attention to emotionally affecting (though usually dismal or haunting) melody is yet another key feature of the album’s appeal (“A Spectral Vision” is a fine example, but far from the only one). And if you want to loosen up your neck and headbang like a bludgeoned maniac, you’ll have plenty of chances to do that, too.

The songwriting is uniformly strong throughout the frequent changes of pace and variations in style, and so are the vocals. Gothmog’s echoing voice is usually the kind of deep, monstrous roar that makes one imagine a mutated cross between a bull elephant, a grizzly bear, and a golem given life by arcane arts, though he also pitches it into a hair-raising howl.

In a nutshell, this is a very strong offering from a mature and highly capable band, produced in a way that gives the music a clear, vibrant, and powerful sound. It’s recommended for fans of Bolt Thrower, very early Septic Flesh, early Gorefest, and early Asphyx, but it’s an album that ought to appeal strongly to all fans of classic death metal.

Look for the album on May 22nd via XTREEM Music. The cover artwork for Descent to Abaddon was created (as you’ll no doubt guess) by Mark Riddick.

2 Responses to “AN NCS ALBUM PREMIERE (AND A REVIEW): SOULSKINNER — “DESCENT TO ABADDON””