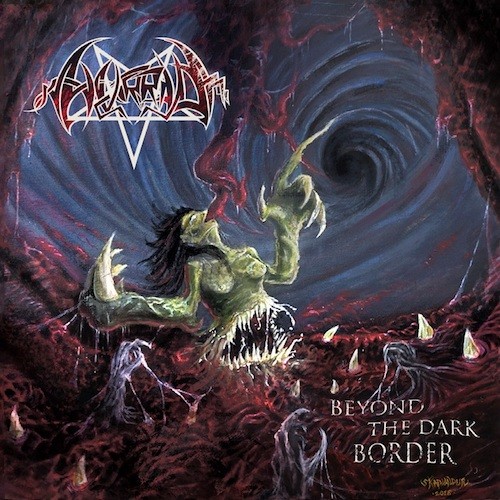 As I began to make my way through the masterful new album by Italy’s long-running Horrid, I nearly didn’t make it past the second track, “Cursed Dunes”. It wanted to live in my head to the exclusion of all else. It pained me to stop repeating the song in order to finish the album. And then I had the same experience over and over again as I came to each new track before reaching the end of Beyond the Dark Border.

And how about the cover art for the album? It’s just as attention-grabbing as the music has proven to be. Credit to Skaðvaldur for its creation — and credit to Horrid for bringing us one of the year’s best death metal albums. We are very happy to present a full stream for you today in advance of its June 1 release by Dunkelheit Produktionen. 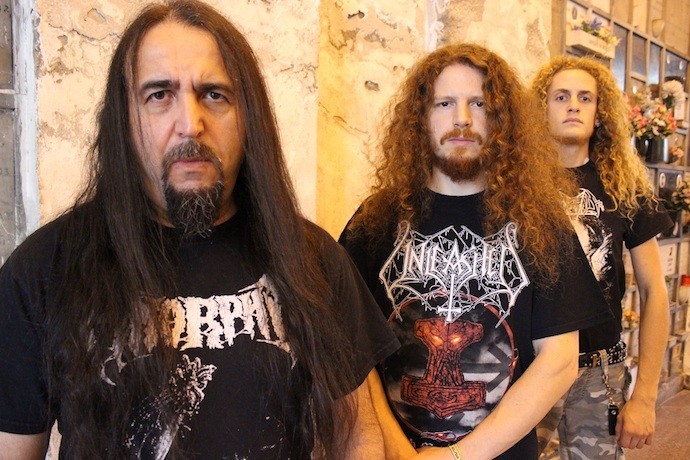 Horrid have been plying their ghastly trade since 1989, with this new album being their fifth full-length, and all that experience shows in spades, from the sure-handedness of the songwriting to the turbocharged force of the performances.

And while the music is vigorously head-hammering and evil straight down to its core, the songs are also laced with bleak but highly seductive melodies — which is the main reason I had trouble getting past “Cursed Dunes”, even after being electrified by the opener “The Black March”. “Cursed Dunes” isn’t the only song with a memorable melody lurking within its savage confines (the melodic solo in the title track is another standout, among others), but it’s a particularly epic one.

The album also proves to have tremendous staying power as a full album, in large part because of the songwriting prowess mentioned earlier. While this is classic, monstrously heavy death metal through and through, the songs have dynamic vitality, with enough variations in atmosphere, pacing, and character that the trip keeps you on your toes straight through from start to finish. Horrid are just as adept at delivering imperialistic might and oppressive, lurid gloom as they are at launching ferocious, marauding rampages, head-hammering chugfests, and d-beat-driven mosh fuel.

Despite their longevity, Horrid probably have not gotten nearly the attention or credit they deserve. If there is any justice in the world, this album should change that. Beyond the Dark Border is utterly lethal and utterly electrifying… prepare to kneel before your new death metal masters. 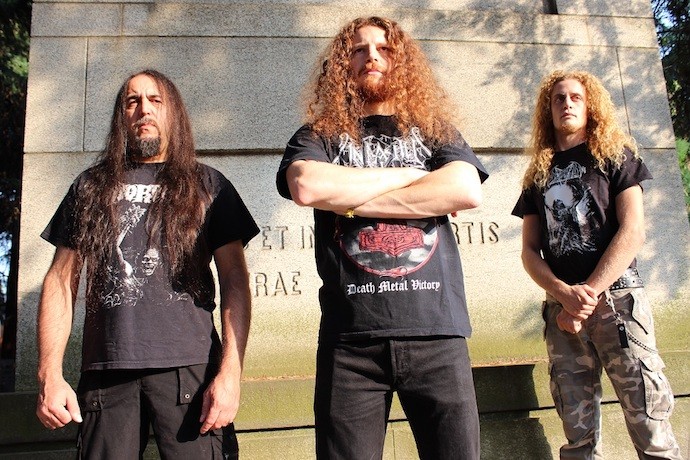 And so, with that introduction, join this black march across cursed dunes and beyond the black border, where blood-painted walls, demonic challenges, and sacrilegious fornication await you beneath the eyes of terror.

Preorder info can be found HERE. For further info, check these links:

2 Responses to “AN NCS ALBUM PREMIERE (AND A REVIEW): HORRID — “BEYOND THE DARK BORDER””