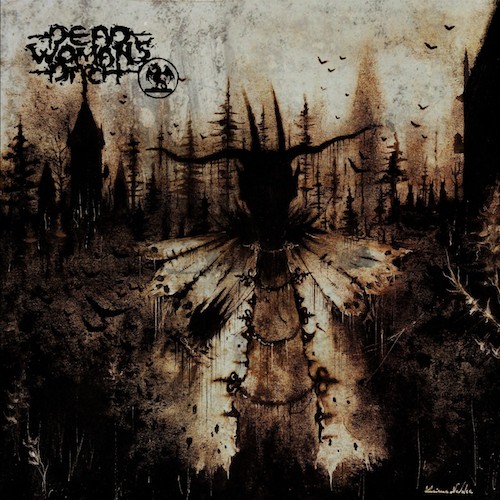 I immediately recognized the distinctive handiwork of Luciana Nedelea on the cover of the new album by Dead Woman’s Ditch, Seo-Mere-Saetan, but only realized how well-chosen it was after hearing the bleak and blasted song we’re premiering from the album today. The song’s name is “We Are Forgiven“, but there’s no forgiveness in the music, unless perhaps it is the forgiveness that death brings to suffering.

The band’s name is no less interesting (and no less foreboding) than the artwork and the music. Dead Woman’s Ditch is the name given to the outer defense of an Iron Age earthworks in the Quantock Hills to the west of Bridgwater in Somerset, England. The band explain that the place earned its name in this way, though as you’ll see, its previous history seems to be just as shuddering: 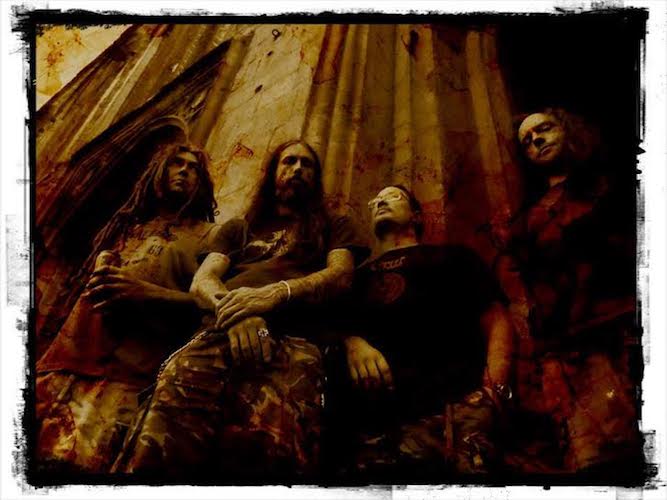 In 1789 John Walford murdered his wife and dumped her body at Dead Woman’s Ditch.

His body was strung up a mile away, at a spot now named Walfords’ Gibbet…it was left to rot for a year and a day.

The ditch is an outer defense attached to Dowsborough Camp, an iron age hillfort. King Alfred’s Herepath or army road runs through the site.

The fort is also known as Danesbury in reference to a massacre of Viking invaders. It’s said the ghost of a Viking child executed shortly after the massacre can be heard from time to time.

Between Dead Womans Ditch and Walfords Gibbet lies Shervage woods — once home to “The Gurt Wurm”, an ancient english dragon with a girth of two Oaks.

Shervage woods are also home to Wayland’s Pool, which is traditionally where the smith god cooled the horseshoes he made to shoe the horses of the Wild Hunt, Odin’s nocturnal ride across the skies to search for the souls of the damned.

We are further told that Dead Woman’s Ditch — the band — was originally conceived by guitarist/vocalist Glenn Charman as a side project during his two years playing bass and touring with Electric Wizard. Charman is joined in this project by guitarist/vocalist George Rhone, bassist Chris Rust, and drummer Robin Corbet.

“We Are Forgiven” effectively summons the terrors and hauntings of those ancient Somerset hills, through a blending of sludgy doom, black metal, and whatever implacable malice causes cancer to consume its host. In the song’s early minutes, the riffing is slow, deep, heaving, gloomy, and threatening, and the clean vocals are almost like a chant — but this is interspersed with bursts of tremolo seething and panther-like howls and shrieks. As the song proceeds, the riffs seem to become even deeper and more murderously grinding, building an air of enveloping catastrophe, and then pounding in sync with thunderous blows on the tom drum, as if driving coffin nails into bone.

Horrors are made manifest… but it’s the kind of apocalyptic experience that’s made for the slow headbang, at once chilling and moving.

Seo-Mere-Saetan will be released in August by Third I Rex. For more info about the release as the due date approaches, watch these spaces:

2 Responses to “AN NCS PREMIERE: DEAD WOMAN’S DITCH — “WE ARE FORGIVEN””