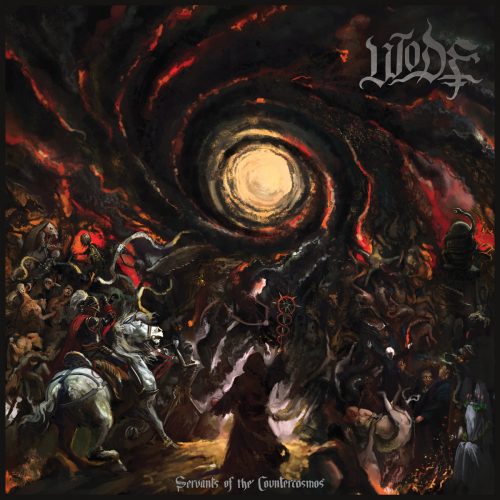 (Andy Synn prepared this review of the new album by Wode.)

The absolutely stunning self-titled album by British Black Metal initiates Wode was, without doubt, one of the finest albums released in 2016.

In fact, I felt so strongly about this assertion that I even went as far as to select it as part of my Critical Top Ten albums, stating that it captured “the true spirit of classic Black Metal with unflinching, unapologetic ferocity, without ever resorting to simply aping the classics” – a statement, and a decision, which I continue to stand by today.

Clearly aiming to capitalise on the momentum generated by their debut, the Mancunian quartet (now incorporating the additional guitar and synth work of one Karl Sveinsson) wasted no time in writing and recording their second album, Servants of the Countercosmos, which finally dropped at the end of last month, and which is available right now from the group’s Bandcamp site.

The big question, however, is this – is the band’s latest slab of blackened beef as devilishly delicious as their debut, or has the short turn-around time between albums left things feeling a little… undercooked?

Well, speaking frankly, that’s a more difficult question to answer than it initially appears – mainly because the band have changed their sound quite significantly in the short span between releases.

Don’t get any funny ideas, Servants… is still very much a Black Metal album, through and through. But whereas the self-titled channelled the misty phantoms of early Emperor and their ilk into a truly majestic display of sombre, moody melody and savage, blackened bite, their second album errs towards the riffier, more death-tinged sound of Dissection and Necrophobic, making for an unexpected, though not necessarily unpleasant, shift in style.

It’s not only the focus of the band’s sound which has changed somewhat either. The focus of their songwriting is different too, resulting in a collection of shorter, sharper, and snappier tracks (the epic “Chaosspell” notwithstanding) which together amount to a little over thirty-one minutes’ worth of malevolent musical mayhem.

As a result of these changes however, making a direct comparison between the two is a little more complex than simply saying that one or the other is explicitly “better”, as the albums were quite clearly written with very different goals in mind, and there are bound to be fans and/or detractors of both who are keen to explain why one or the other is clearly the superior record.

Whichever side of the divide you fall on, however, it’s impossible to deny the sheer energy and intensity that pulses through your speakers when the eerie, slow-build introduction of opener “Crypt of Creation” finally reaches its boiling point, bursting open in a furious geyser of molten riffs, snarling vocals, and scorching hooks, or the visceral venom and vitriol which underpins the groovesome grimness of “Celestial Dagger”.

“Temple of Interment” is a riff-lover’s paradise, the fiery fretwork of Czerwoniuk and Sveinsson packing in more twists and turns than the song’s four-minute run-time should seem able to contain, while the title-track leans perhaps a little more heavily than it should do in the direction of pure Dissection-worship, but is still a highly enjoyable and engaging listen.

It’s no surprise, however, that “Chaosspell”, by some margin the longest and most elaborate composition here, proves to also be the most impressive and most interesting – and, in many ways, the least derivative – song on the album, grabbing you by the throat and taking you on a nine-minute rollercoaster ride to hell and back, after which the subdued instrumental outro of “Undoing” proves to be ever so slightly anticlimactic.

When all is said and done I find that I still prefer the self-titled record overall, as this album’s somewhat truncated length (in combination with the newfound brevity of the band’s songwriting) leaves it feeling a little unfinished in my eyes, with perhaps one more killer cut needed to really put it over the top.

Still, it would be ridiculous to consider Servants of the Countercosmos to be a victim of the dreaded sophomore slump since, although it might not quite reach the same high bar set by its predecessor (although a number of the individual songs come perilously close), it still offers more than enough grim and gritty gratification to satisfy all but the most jaded of listeners.

4 Responses to “WODE: “SERVANTS OF THE COUNTERCOSMOS””