On June 25th — two days from now — GrimmDistribution will release the new album by SinnerAngel, a group that first came together more than a decade ago in the city of Medellín, Colombia. The album’s name is Sinister Decálogo, which refers to “a precise set of ideas that conform to the sinister side of the human existence”. The album also “deals with themes about the allegorical double human morality, the need for approval and dependence of the deities to assert themselves, the constant fear of the earthly and the passing”.

Today we are pleased to present a full stream of what turns out to be an unusual album, one that incorporates a variety of musical influences that reflect the wide-ranging interests of the band’s members. Lacking any clearly defined genre boundaries and with a tendency to experiment, the band have grasped the term “dark metal” as a description. Of course, like the music on this album, that term has no precise definition. And so we’ll offer a few more words of introduction, though no one will blame you if you just skip right down to the album stream and dive in. 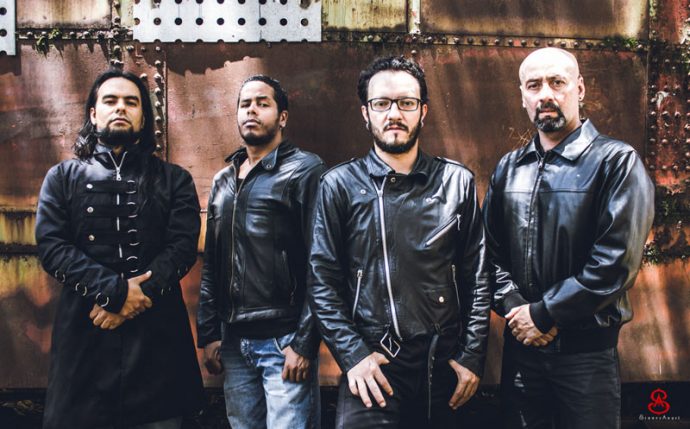 As you listen to the songs, you can pick out elements of fleet melodic death metal, power metal, and black metal — and the album begins with the boom of timpani, acoustic instruments, a folk-like melody, and a classical symphonic overlay, while the record closes with a beautiful acoustic guitar instrumental.

Most of the time, the entire band is operating at a turbocharged pace, demonstrating a high level of technical skill through lots of flashing but fluid fretwork and furious but razor-sharp drumming. At others, the music has the cadence of a somber procession. Anthemic melodies animate some songs, and others sound like the musical battle cries of a barbarous war charge.

As for the vocals, they are jagged and fiery, roaring and scalding, and would be at home on either a death metal or a black metal album.

In the main, this album will probably appeal most strongly to fans with an ear for fast and furious melodic death metal and an appreciation for high-caliber guitar work. Enjoy!