(Andy Synn reviews the new album by Poland’s Decapitated, which will be released on July 7th by Nuclear Blast.)

I find, when a review has the potential to be contentious, that it’s always best to lay your cards out on the table right from the start.

So let’s be clear about one thing straight away – Decapitated are never going to go back to being a “pure” Death Metal band.

It’s just not going to happen.

In fact Vogg has been very clear, in numerous interviews, that as long as his hand is on the tiller (and seeing as how it’s very much his band, I can’t see that ever changing) the good ship Decapitated will keep on moving forwards, not backwards, upwards not forwards… 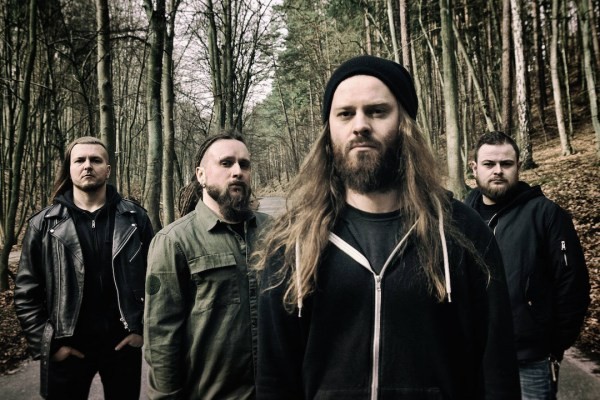 …but that doesn’t necessarily mean that the band have lost touch with their roots. Far from it in fact as, despite the plethora of other influences at play here, there’s not a single track on Anticult – no matter how thrashy, how groovy, or how unexpectedly melodic – that isn’t instantly recognisable as being Decapitated, through and through.

Of course most of that is down to the continued presence of Vogg himself, whose signature guitar tone and astounding ability to pull massive, titanium-clad riffs seemingly out of thin air, means that even when he and his cohorts angle away from the more Death Metal aspects of their sound – as they do during the gargantuan, post-Pantera grooves of “Deathvaluation” or the bombastic, Slipknot-meets-Strapping–Young–Lad, assault of “Earth Scar” – the essence of the group still remains intact.

What’s more, it’s really not that hard to pick out the threads here which tie back into the band’s previous albums, if you’re actually paying attention.

Storming opener “Impulse”, for example, may be shrouded in a cloak of dark, moody melody (indeed, the album as a whole is probably the most overtly “melodic” of their entire catalogue), but riff-wise it frequently calls back to both Carnival Is Forever and The Negation, while the utterly pulverising “One Eyed Nation” (the album’s heaviest track) and the punishingly aggressive “Anger Line” both recall a more streamlined take on the biomechanical metallic mayhem of Organic Hallucinosis – with drummer Mlody (now on his second stint as a fully-fledged member) kicking up an absolute storm behind the kit.

Granted, if you didn’t like Blood Mantra, or are still pining for a full return to “the good old days”, then there’s a very good chance that this album won’t be for you (which is fine, by the way, not everyone has to like everything), but if – like me – you’re one of those who’ve stuck with the band through every new evolution, judging each album on its own merits, then you’ll be happy to learn that Anticult marks yet another major step forwards in Decapitated’s quest to become the quintessential Metal band of the 21st century.