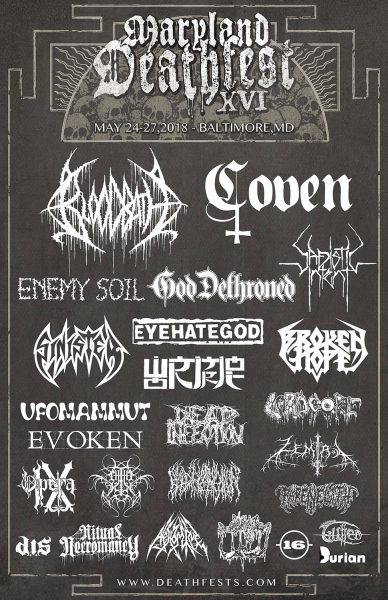 The 16th edition of Maryland Deathfest will take place in Baltimore on May 24-27, 2018. Today, MDF announced the first round of confirmed bands for the festival, and it’s a list that palpitates my heart:

That list ranges from some brilliant death metal newcomers (e.g., Blood Incantation, Phrenelith, Chthe’ilist) to some of the old gods of the genre (e.g., Bloodbath, Sinister, Broken Hope, Sadistic Intent). It features the reunited and resurrected God Dethroned and Wormrot’s second effort to enter the United States for MDF.

The music spans a spectrum from Eyehategod to Ufomammut to Evoken to -(16)-, from Pete Helmkamp’s Abhomine to Zemial and Opera IX — which is a pretty broad spectrum — and the brutal barbarians of Sublime Cadaveric Decomposition and Lord Gore (whose last album came out more than a dozen years ago) are also in the fold.

And it was a special pleasure to see the name of Coven on that list, who recently gave their first U.S. performance in 27 years at the NCS co-presented Northwest Terror Fest and gave a show that will be talked about up here in the Pacific Northwest for years to come. Cool to see that many more people in the U.S. will now be able to enjoy that experience.

In short, a damned good start in my book. Of course, many more names will be announced later.

MDF has also announced that the venues that will be used in 2018 will be the same as in 2017. Rams Head Live and Baltimore Soundstage will be used all 4 days and vendors will be set up at Power Plant Live complex.

A limited amount of early bird passes go on sale TODAY at 10 am EST — at this location:

3 Responses to “MARYLAND DEATHFEST 2018: FIRST ROUND OF BANDS ANNOUNCED”