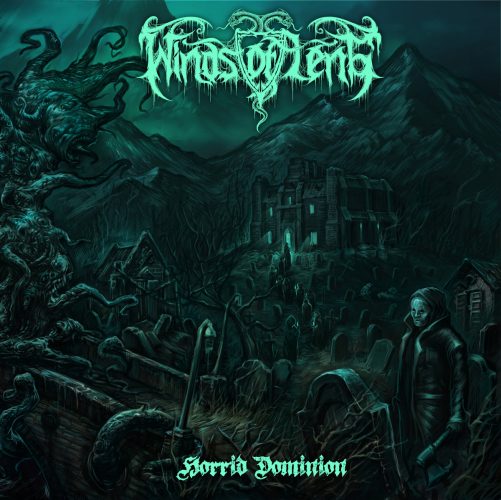 (This is Andy Synn’s review of the new album by Arizona’s Winds of Leng.)

Riddle me this, riddle me that… what do you get if you combine the gruesome riffosity of classic Dismember with the merciless melodic menace of The Black Dahlia Murder?

You get Horrid Dominion, the stunning debut by Winds of Leng, that’s what.

Now, obviously, a comparison as simple as that is always going to be a little reductive.

After all, there’s also a fair amount of influence from Grave and early Entombed on display throughout Horrid Dominion, as well as a smidgen of Black Metal infiltrating certain tracks (“Audrey”, “Chaosborn”), while the album as a whole ultimately reminds me quite strongly of both God Dethroned and Blood Red Throne in the ravenous intensity and pinpoint accuracy of its execution.

Putting all these comparisons aside though, what we have here are eight tracks (plus one intro) of high-quality, high-energy, high-voltage Death Metal which, while undeniably rooted in the values of the old-school, offer more than just a simple re-tread of familiar sounds, with the band’s cutting-edge delivery (not to mention a massive, crystal-clear production courtesy of one Mr. Dan Swanö) situating them very much in the here and now.

Songs like the furious “Beneath Unhallowed Earth” and the utterly relentless “Devourer” blast and gallop and groove with impressive, infectious dynamism, the vocals switching back and forth between a brutish mid-low guttural and a starving, scalded shriek, while the guitars continually crank out a litany of gigantic, bone-jarring riffs and razor-sharp hooks that never fail to worm their way into your brain.

And while there’s not a single dud among them (I’m particularly enamoured of the seven-minute monstrosity that is “Awakening the Overmind”, with its prodigious blend of gatling-gun blastbeats and heaving, doom-laden chords, though my favourite track seems to change with every listen) there are two things – both relatively minor, but still irksome – which Winds of Leng do here that rub me the wrong way.

First, the intro track is just called “Intro” – which to me seems like a wasted opportunity, and a bit of a cop-out. Come on guys, if you are going to have an intro track, at least give it a proper title. Make it part of the experience, rather than an afterthought.

And, secondly, the unexpected use of samples at the start and end of the otherwise excellent “Lord of the Dead” seems oddly out of place in the grand scheme of things, and slightly upsets the carefully cultivated momentum of the album as a result.

Still, when the actual album as a whole is so unbelievably strong throughout (and I haven’t even gotten round to mentioning the pure, punishing perfection of “The Colour” or the evilly anthemic strains of “The Void”), these aren’t exactly major issues.

So file this one right next to albums like Renascentia (Earth Rot), Starspawn (Blood Incantation), and Denouncing the Holy Throne (Heaving Earth) as another near-perfect example of how to mix the old and the new (but not the nu-) in a way that brings out the absolute best of both worlds.