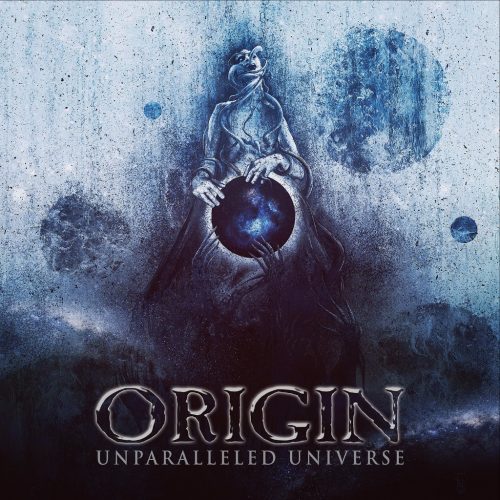 (TheMadIsraeli reviews the new album by Origin, which will be released on June 30.)

Origin are one of death metal’s most unique standouts from the 2000s-era of death metal. Their brand of chaotically fast, noisy, cosmic, techy deathgrind has never been done better, nor even really emulated properly, and that’s because this band has always had a consistent vision. Or rather, Paul Ryan and John Longstreth have had consistent vision. The Origin sound is unmistakable and it has remained so, to their benefit and at their peril.

Unparalleled Universe is Origin’s best record since new vocalist Jason Keyser joined back in 2011, especially compared to 2014‘s Omnipresent, which was received… not as well as the rest of Origin’s discography. I suspect the Origin guys felt this, and maybe even felt that way about Omnipresent themselves after the dust had settled, because Unparalleled Universe is a step up. It has some of the best songwriting, riff-craft, and consistently belligerent sonic matter obliteration they’ve ever created.

The most impressive aspect of Unparalleled Universe is how uncompromising yet memorable it is while maintaining Origin’s signature style — a combination of tech-death riffing; hyper-technical, grindcore-inspired, oppressive-noise-wall drumming; a raw combination of death metal and grindcore vocals; and some of the most dizzying cacophanies of audible nonsense known to man.

The opening sweep riff of the opening track “Infinitesimal To The Infinite” is pure alien melody underneath some hyper-blasts that sound like sixty fully loaded M60‘s firing off all at once. It’s bizarrely abrasive and jarring in the finest Origin tradition, and a nice two-minute burst of violence with which to introduce the record. The swarm-of-hornets style riffing on top of Longstreth’s drum lines sounds like the auditory emulation of D-Day; it’s overwhelmingly brutalizing.

It’s also impressively demonstrative of Origin’s dedication to writing oppressive, relentless music that’s also still fully audible despite the chaos, partly thanks to the mixing, but also because Paul Ryan and John Longstreth have a chemistry in the riff-to-drum relationship that ensures neither is being drowned out by the other. I think this is due in part to Ryan’s micro heavy style of call-and-response, rhythmically hooky riffing style layered on top of Longstreth’s neverending catastrophic air raid of percussive napalm. That call-and-response isn’t noticeable at first because it happens on such a fast-paced level, but it’s there. It’s one of the things that makes the Origin sound.

The album is also diverse for an Origin record. The groovy monolith that is “Mithridatic” and the fundamentalist grindcore ferocity of “Truthslayer” are welcome additions amidst the more familiar Origin brand of chaos. Other songs like the more ’90s imperialistic feel of “Burden of Prescience” bring even more welcome diversity to an Origin record.

The mainstay Origin songs, though, fucking count for their place on this record. “Infinitesimal To The Infinite”, “Accident And Error”, “Cascading Failure, Diminishing Returns,” and “Dajjal” are some of the hookiest yet most brutal songs Origin has written. I especially want to give props to the album’s near ten-minute closing epic “Unequivocal” for being a deliberately melodic song, full of Middle Eastern riffs and a neo-classical funeral procession of an outro that ends this album on a more somber note but still done with Origin flavor.

Unparalled Universe is Origin’s best work since Antithesis, and one of their most musically diverse while still remaining uncompromising in its descent into madness — and definitely on track to be one of the year’s best death metal albums.

Unparalleled Universe will be released on June 30th via Nuclear Blast (North America) and Agonia Records (rest of the world). The cover art was prepared by Filip Ivanovic (Dismember, Cryptopsy, Heavy Montreal, Gorguts).