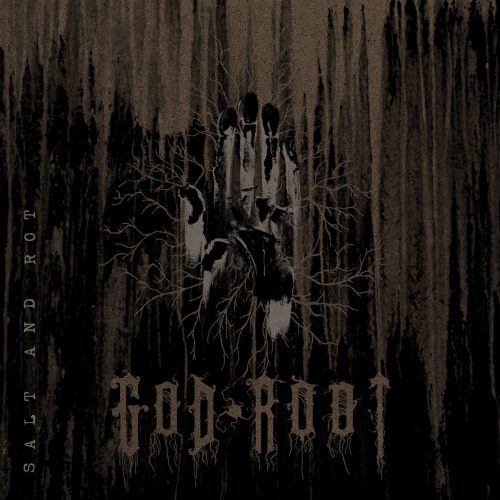 While each of the four tracks on the new album by Philadelphia’s God Root could have a nerve-wracking and even devastating effect on your emotional well-being if heard alone, Salt and Rot was quite clearly planned as a unified piece of music, a single well-orchestrated descent into madness. Part crushing death ritual and part hallucinatory fall into a lightless abyss where there’s very little to hold onto, where fear and emotional breakdown are the fracturing orders of the day, the album is staggeringly powerful, stunningly bleak and disorienting, and also unforgettable. Before you know it, it has you in its clutches and pulls you into its calamitous and narcotically vaporous vortex, extinguishing the will to resist.

Salt and Rot will be released by Horror Pain Gore Death Productions on July 11th — tomorrow. To help pave this now-very-short path to its advent, we have a full stream today. My best advice is to set aside 33 minutes for uninterrupted listening, and then the rest of the day for recovery. 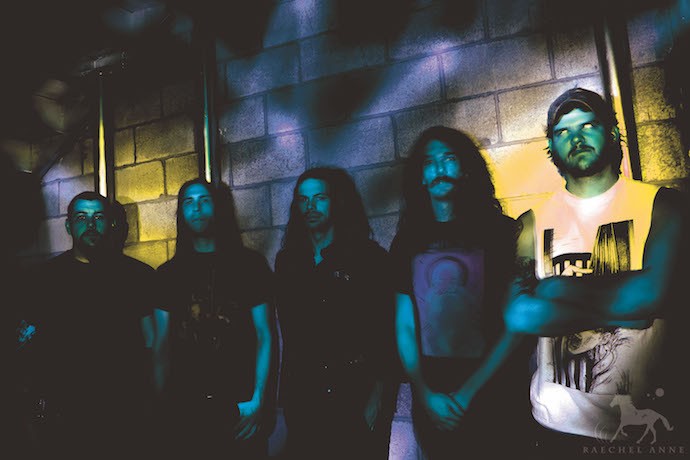 You can pick out the ingredients that go into the sound — sludge, doom, perhaps a bit of stoner in the massive riffs and the aspects of shamanic ritual, and doses of unhealthy electronic noise — but God Root’s brand of sonic torment and desolation isn’t easy to pigeonhole. The label makes references to such bands as Neurosis, Old Man Gloom, Swans, and the mighty YOB, and you can understand why when you listen, but those references still might not prepare you well enough. God Root have selected recognizable tools of their trade, but fashioned something of their own, something that’s both abominable and transfixing.

As the album is structured, it begins with a long preparatory piece, but “Reclamation” is more than simply an intro. It begins with an ominous ambient drone and a scattering of haunting sounds undergirded by the low, muffled rumble of a drum, but then becomes more intense and unnerving with the arrival of a crushing, ritualistic drum rhythm and a mix of unearthly wailing and scarring howls. It builds into an experience that’s strangely hypnotic, a void-faring trip that plants the seeds of the unhealthy fascinations that will soon flower in the listener’s mind.

One very long track follows (“From Hounds To Silent Skies“) and then two shorter but still substantial ones (“The Peak Is Our Threshold” and “Conscious Disease”), all of them flowing together to create a harrowing journey.

You don’t get a recognizable riff in the album until almost two minutes into that mammoth second track, but it’s a killer when it comes — a big, low-tuned, fuzz-bombed head-mover, married with a high skittering lead. Many minutes pass before that slow, craggy mammoth of a riff returns near the end and loops over and over, getting the listener’s head moving while a sinuous lead guitar melody casts a poisonous spell. In between, the music surges and ebbs repeatedly, growing to a delirious frenzy, like a fuse burning toward a detonation, and then subsiding again, falling into a shivering hallucinatory state, colored by dismal, dissonant chords, desolate leads, and even something that sounds like a squalling saxophone (but might not be).

“From Hounds To Silent Skies” is the must-listen track on the album, the centerpiece, where God Root pull everything together. Among other things (many other things), while the introductory track gives you a first taste of the album’s vocal diversity, “From Hounds…” delivers the full impact. Three of the band’s members contribute vocals, all different, each providing its own texture; at some points (the most apocalyptic ones) they’re layered together. They come in these flavors: tortured and torn, high and wailing, clean and gloomy (like the emanations of a passing phantasm), rough and growling. They rise in wild cries of pain, and they boil like a heated mixture of anguish. anger, and acid.

At first, the “The Peak Is Our Threshold” seems like an interlude after the engulfing enormity of “From Hounds…”, a cascade of tension-ratcheting ambient sounds over a bubbling drum rhythm and widely spaced cymbal strikes, but the drumming becomes more animated and the electronics grow into an abrasive storm… leading into the hard-punching drum-and-bass rhythms that launch “Conscious Disease“.

That song is head-moving, but also dreamlike (in a frightening way). Three minutes in, and you get another one of those big, crushing, mid-paced riffs, which arrives along with wrenching vocal antagonism. But the song is also eerie and crazed, thanks in part to a series of often frantic and emotionally splintering spoken-word recordings and of course the layering of the band’s own vocalists, which drive the music into a seething boil. There’s a melodic hook in this track that’s damned catchy (as well as dire), but also a squalling, shrieking guitar solo and a desolate, moaning lead. And on top of all that, the band also transform into a hammering weapon of destruction.

It’s hard to conceive of music like this being made by people who aren’t feeling pain. And so it came as no surprise when we asked the band for a comment, and received this statement from vocalist/drummer Fred Grabosky (which includes an explanation about those spoken-word recordings):

“The album took kind of a lot out of us and it feels pretty exhilarating to finally have folks listening to it. We were all in some pretty dark places during the writing of this record and I think there’s definitely some pain embedded in among the noise and riffs. Not just ours; we asked our friends and family to share some personal stories and anxieties and we recorded them and processed them into the record as kind of an exercise in magickal catharsis. It was pretty incredible and humbling to have people be that open and vulnerable with us. We tried to take all that anger and fear and weakness and forge it like a weapon. We want to empower people listening to the music the same way we feel empowered playing the music.”

Catharsis — a purging of dark, lacerating emotions — may indeed be one effect of listening to the album, and may well have been one consequence of writing and recording it. But even if you leave the music with all the baggage that was on your back when you began listening, it’s still an experience that’s likely to stay with you because of its potent emotional force.

God Root also want to convey these additional thanks:

“We want to take a second to thank Rich Bukowski and Neil Cote at Groundwork Sound for their collective efforts and hard work they put into this album.”

Now, remember my opening words of advice, and press play below.

P.S. God Root will be embarking on a tour with Sunrot during August — check the schedule of dates after our stream of Salt and Rot. 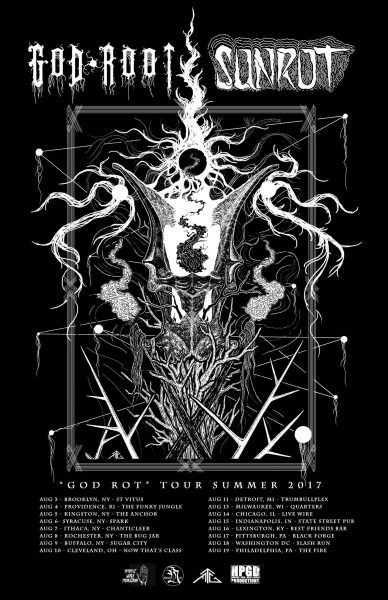 2 Responses to “AN NCS ALBUM PREMIERE (AND A REVIEW): GOD ROOT — “SALT AND ROT””