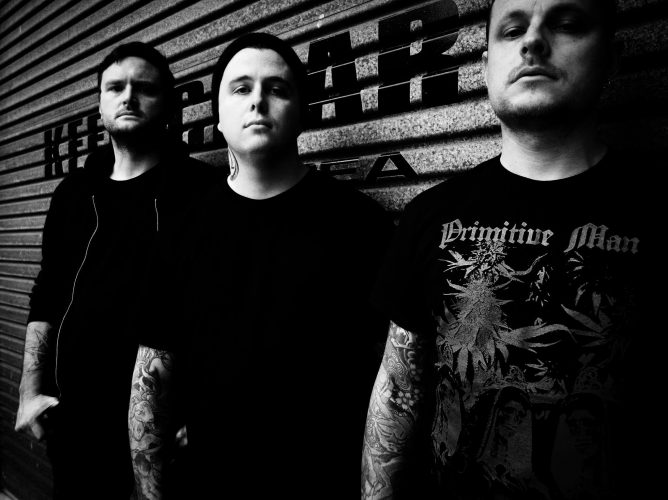 (Our friend from New Zealand Craig Hayes (Six Noises) brings us this alert about the first excerpt of sound from the new album by NZ’s Bridge Burner.)

Crusty New Zealand death metal band Bridge Burner features members who’ve played in groups like Graves, Diocletian, Ulcerate, Punished, Heresiarch, Witchrist, In Dread Response, and The Mark of Man. That’s an intimidating roll call of bands, but I’d draw your attention to the first name on that list, because the death of turbo-speed Auckland punk/metal band Graves resulted in the birth of Bridge Burner.

Graves released a couple of thoroughly neck-wrecking and nihilistic albums before calling it quits in 2015. And the band’s guitarist, Josh Hughes, went on to compose all the pulverizing music on Bridge Burner’s first EP, Mantras of Self Loathing. That release featured a crushing mix of brute-force punk and death metal, and vocalist/lyricist Ben Read howled with unhinged rage over the vitriolic barrages within. Mantras of Self Loathing’s marriage of intensity to belligerence promised great things, and Bridge Burner have recently stoked the fires of anticipation even more by releasing the preliminary mix of a storming track entitled “Illness & Loathing” from their upcoming full-length debut.

“Illness & Loathing” sees feral death metal and crust-caked hardcore fused in a cauldron of wrath and torment –– aka it’ll duly appeal to fans of both burly metal and berserker punk. “Illness & Loathing” also features Bridge Burner’s first recordings with drummer Cam Sinclair (ex-Diocletian, Heresiarch, and Witchrist), who has a growing list of formidable mixing and mastering credits to his name.

As yet, no release date has been announced for Bridge Burner’s full-length debut. But “Illness & Loathing” showcases a band primed to deliver bulldozing guitars, battering percussion, and vicious vocals galore.

Check out “Illness & Loathing” below, and rest assured that No Clean Singing will be keeping you updated on Bridge Burner.