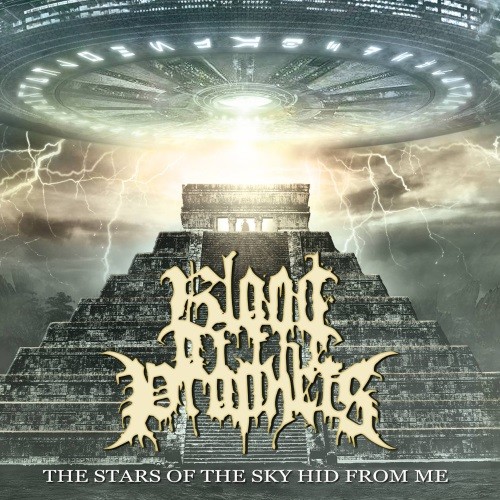 (Our old friend Professor D. Grover the XIIIth [ex-Number of the Blog} presents the following review of the new album by Blood of the Prophets, scheduled for release on July 27.)

Greetings and salutations, friends. As promised, I have returned to provide my thoughts in full on The Stars Of The Sky Hid From Me (henceforth to be referred to using the acronym TSOTSHFM), the newest album from Blood Of The Prophets, a technical death metal trio from Toledo, OH.

TSOTSHFM is the band’s first release in seven years, a long absence for any band regardless of how well-known or obscure they may be. Consider your life seven years ago, and how much has changed since then. I could list countless major differences for myself and exhaust the entire space of this review and still leave out many, many things. For a band to return from that kind of absence and then deliver a quality work is impressive. 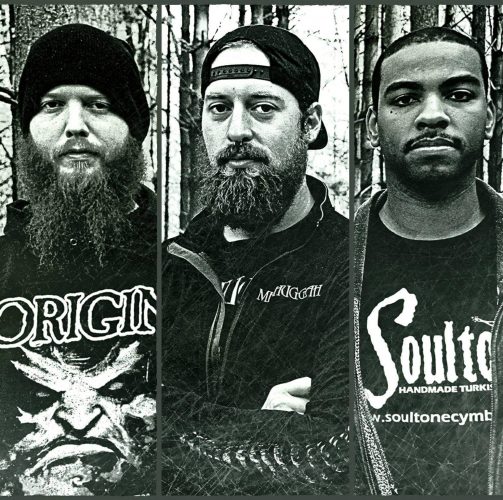 TSOTSHFM is a concept album, a detail I hinted at in the premiere of ‘Megalithic‘, but an important part of the album’s concept is delivered in the way the tracks flow and the music’s tone mutates as it proceeds. The story is simple enough, envisioning an alien race visiting a primitive earth society and being hailed as gods, then enforcing their will and sparking a rebellion that forces their eventual departure. It’s a common enough trope in science fiction, but it’s not one seen as frequently in music, and it’s perfectly suited here.

Blood Of The Prophets blend modern technical and melodic death metal with elements of deathcore, and while that particular mix of elements isn’t exactly uncommon these days, the way that they execute this mix of styles is what really sets them apart. At times their sound bears similarities to a number of different artists, depending on which track you’re listening to, but they adapt these styles to their own sound with a deft touch and never end up sounding entirely derivative of any one act. This is a result of the album’s flow to which I referred earlier.

It is important for a good concept album to bear some semblance to a story, and to do that it requires a sense of structure, having a clear beginning, middle, and end. TSOTSHFM is fairly clearly delineated, due in large part to the intro, instrumental interlude, and outro tracks, but also in the style of the remaining five songs.

Yes, TSOTSHFM is a short album, clocking in at 8 total tracks and just under 24 minutes. However, in that brief period of time they do an excellent and concise job of delivering their story. After the unsettling first contact intro ‘Descension’, featuring some unsettling alien sounds over a backdrop of indistinct voices, the music is brutally heavy, but the melodies and solos carry a sense of hope even as the lyrics speak of a society unprepared for what is to come.

The Latin-flavored acoustic solo at the end of ‘And Then They Came Pt. I’ is a beautiful bridge to ‘Megalithic’, which finds our extraterrestrial visitors hailed as gods, monuments built to honor them even as they wield their influence to enslave mankind. Another beautiful, uplifting guitar solo gives way to a grinding repeated riff.

That riff yields to the plodding ‘And Then They Came Pt. II’, which marks the album’s first major shift. The track begins with a sparse atmosphere and Yautja-esque clicking before commencing with some heavy chugging riffs layered with a slightly atonal, alien-sounding melody. This dynamic is carried forward onto ‘The Confrontation And The Resistance’, a track that is divided between the atonality that seems to represent the extraterrestrials and the melody that seems to represent humanity.

‘The Great Council’ bears a similar theme, signifying the conflict between mankind’s desire to continue to survive by serving their ‘gods’ and the ever-increasing knowledge that prevents them from doing so. There is still an alien feel to much of this track, thanks to some angular, odd-tempo riffs, but the melodies take on more of a conflicted, foreboding tone.

This tone permeates ‘Tides’, which truly represents the final turning point and ushers us into the story’s third and final act. The consequences of the human rebellion are revealed, as all mankind wait (“We tremble
/ for we know not what lies ahead / Will punishment ensue / Will our civilization be wiped clean?”). And then, seeing that the humans will only continue to grow and seek out knowledge, they depart. The solo here is triumphant, but also uncertain, bearing the realization that the gods humanity worshiped are now well and truly gone. The album closes with one final bout of alien riffing, overlaid upon a bed of distorted, confused human screams, drawing the story to its uncertain conclusion.

To have this story packed into such a concise runtime is made possible by the band’s considerable talent and songwriting skill. Guitarist/vocalist Paul Fuzinski is the driving force here, thanks in no small part to his impressive soloing ability. When it comes to guitar solos, a simpler solo with emotion and heart behind it will inevitably be superior to a solo that is technically brilliant but utterly soulless, a concept lost on many bands these days, but Fuzinski gets it and as a result the guitar solos are one of the album’s true strengths.

The contributions of bassist Jason Mitchell should not be understated, however, and while his work isn’t flashy, he skillfully matches Fuzinski’s riffs and provides depth to the songs’ inherent melodies. Drummer Will Clark is the backbone of the band, shifting tempos effortlessly and keeping TSOTSHFM from becoming an Origin-style blastfest.

In the ‘Megalithic’ premiere, I mentioned Decrepit Birth and The Faceless (specifically, Akeldama) as points of reference for the band’s sound, and those comparisons are fairly valid, although they hardly cover the breadth of TSOTSHFM’s entirety. It’s easy enough to hear, at various points, sonic references to Fallujah, The Black Dahlia Murder, Gojira, Suffocation, and Meshuggah. But as I previously stated, what makes TSOTSHFM interesting is not the band’s influences, but how those influences are adapted into a coherent whole.

The warring traditional and atonal melodies representing the two sides of this story provide a startling amount of depth for such a short album, and while having two dissimilar sounds seems like it might create a divided album, the way that they are combined and intertwined provides for a strong unified tale instead.

I’ll be the first to admit that as my tastes in metal have evolved, I’ve skewed further toward the old-school style of death metal and away from the more modern bands. However, I haven’t completely abandoned the modern style, and sometimes an act catches my ear and draws me in. Blood Of The Prophets got my attention because they are a local band, but their true draw for me was the depth to their music, the way that it draws you in and then keeps you engaged, uncovering new wrinkles with every listen.

It might be easy to dismiss Blood Of The Prophets as another technical/melodic/death metal/core band, but to do so would be an error. The Stars Of The Sky Hid From Me is short, but like a good short-form story or film, it packs a good amount of content into a small package.

7 Responses to “BLOOD OF THE PROPHETS: “THE STARS OF THE SKY HID FROM ME””