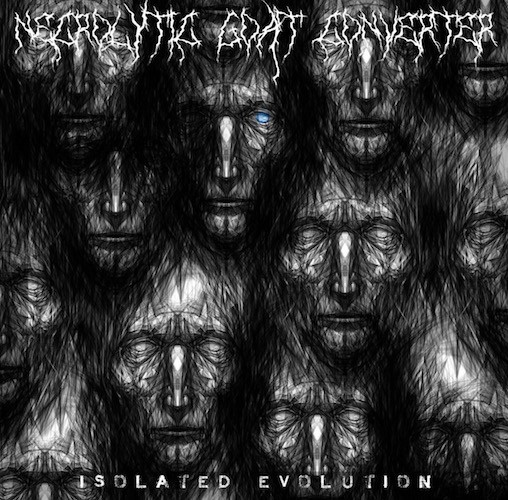 New York musician (and music writer) Chris Voss took some chances when he embraced Necrolytic Goat Converter as the name for his solo metal project. On the one hand, it’s such an off-the-wall moniker that once you see it, you won’t forget it. On the other hand, it’s so ridiculous that there’s a chance people will leap to the conclusion that the music is a joke, or maybe dismiss it as an offensive skewering of sacred black metal cows.

I’m here to tell you that either reaction would be a grievous mistake, because this debut album, Isolated Evolution, is really, really good. I’ll explain why I think that, and why the album has quickly become a personal favorite in a year already filled to overflowing with outstanding new albums, but you’ll also get the chance to decide for yourselves — because we’re premiering a full stream of the album in advance of its August 18 release. 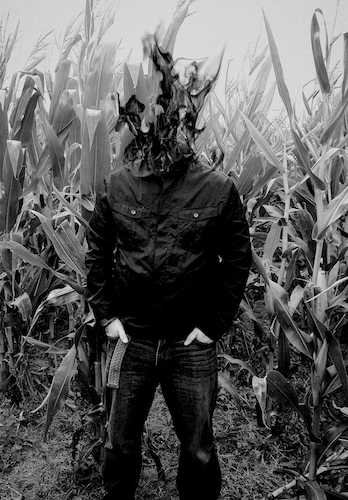 We’re told that the name Necrolytic Goat Converter “came about as a crowd-sourced joke on Facebook in 2015, combining all that is black and metal (goats, dead stuff) with a mediocre play on words having to do with the automotive industry that Chris Voss worked for”. We’re also told that it became a vehicle for Voss “to get off his depressed ass, pick up the guitar he’d been playing for over 20 years and actually do something more than play the main riffs to Transylvanian Hunger in his office.”

The whole thing may have started as a joke, but it has quite obviously become a labor of love, and in its successful hybridization of musical influences the album is hugely appealing. The songs are also remarkably well-written, loaded with hooks and driving rhythms that get stuck in the head, each one memorable, each one with staying power.

Black metal is, of course, the backbone of these songs, but the music draws from different wellsprings across that blighted and be-thorned landscape, and also incorporates stylistic ingredients from outside the realm altogether. In other words, there’s a lot going on here; you can sense Voss exercising different musical muscles as he moves from song to song (and within the songs), and it’s exhilarating to hear it as it happens.

He chooses to launch the album with the slow, reverberating, spectral melody (edged with abrasion) that begins “A Quiet Affirmation”, although the chill in the music is warmed by the tone of the bass. It’s a gloomy but entrancing way to begin, with a further connection to DSBM established through Voss’s glass-cutting shrieks. But even in this opening track, things change as a propulsive beat pushes the intensity until it breaks, with the music falling into an exotic, serpentine melody that feels like the dance of a cobra.

Exotic, Eastern-influenced melodies surface again in some of the following songs, including the title track which comes second in the running order. “Isolated Evolution” is also a course change, with a deep riff that grinds like a circle saw cutting through old oak and an atmosphere that’s grim, cold, and barbaric. Yet it’s also a serious head-snapper, with a jabbing heavy metal riff and a driving beat that makes it powerfully compulsive.

Voss knows how to write a damned good rock song, too. And that’s what “The Dark Within” is — a heavy, ominous, head-moving rocker with a squalling, swirling lead (and more of that Eastern melodic flair).

More relentless pulse-pounding lies ahead as “Strange Symbols” takes its turn, along with feverish melodies suggestive of delirium and ecstasy as well as those which generate arcane, mysterious atmospheres (there’s also a rippling keyboard measure in the song that generates visions of an infernal carnival).

On the other hand, “Seraphim” is slower, more despairing and morbid in its emotional weight, creating a feeling of perilous, creeping dread. And while “Eternal Winter” turns out to be a 9-minute thrill-ride through changing soundscapes, it bows to the wintry, sorrowful antecedents of the Norwegian second wave.

I suppose it could be said that, through all its twists and turns, the album is heavy and shaded with gloom, but it’s so vibrant and creative that to these ears it never feels oppressive. And in the final track, “The Calamity of Not Knowing”, there are times when the music glows with a beautiful unearthly light, with a sense of uplift mixed with sadness, clean vocals mixed with the scalding howls, and a sweeping, soaring synth melody that’s almost regal.

So, don’t be misled by this project’s outlandish name: Isolated Evolution is outlandishly good, and a welcome departure from well-beaten paths. Check out the stream below, and pre-order the album on Bandcamp.