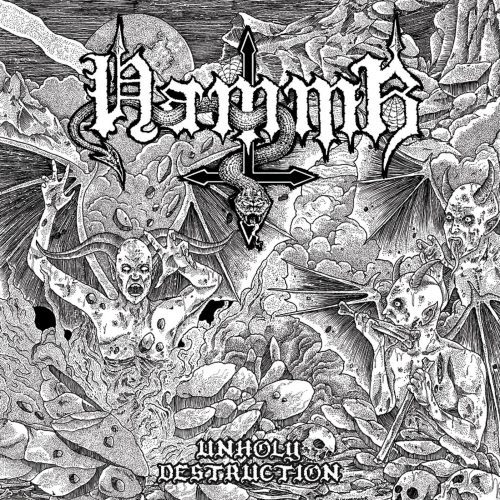 There’s enough electrifying energy in “Satanic Raid” to power a large metropolis and enough speed to lap the pack at a NASCAR race, not to mention more than enough feral barbarism to put smiles on the faces of those of you who live to slash and burn (at least through your music). There’s also some kind of immediately addictive poison coursing through the veins of this beast, which is transmitted directly into the listener’s bloodstream. 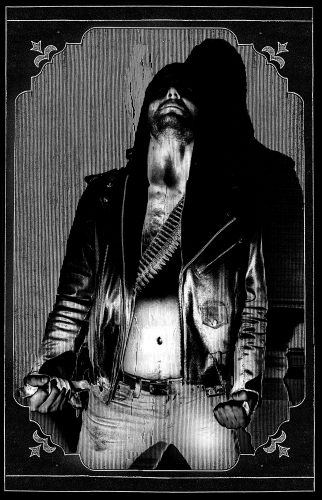 I’ll be back in a minute, I’ve got to go clean myself off.

Okay, I’m back. About that solo, it was performed by Commandor Vanik, live guitarist from the band Midnight. He also mixed the album, while Joel Grind (Toxic Holocaust) did the mastering.

Oh yeah, sorry, still kind of over-excited from the song.

“Satanic Raid” comes from an album named Unholy Destruction, which will be released later this year on CD, vinyl LP, and cassette tape by Hells Headbangers. And that album is the debut full-length by a “Satanic speed” metal project named Hammr, which is the solo project of Cleveland hellraiser J. Hammer. 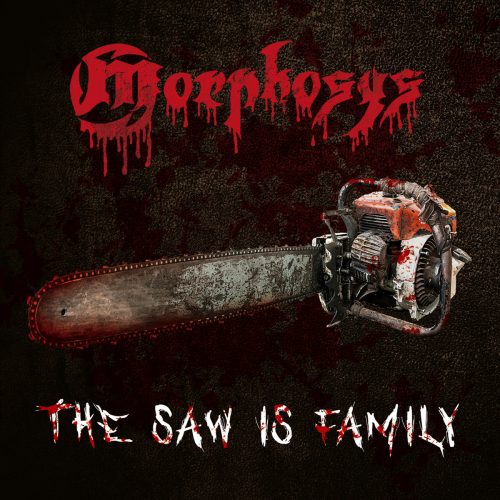 The next two songs I’ve served up below are “The Walking Dead” and “You Shall Bleed“. The former veers between ghoulish mid-paced jackhammering and frenzies of gibbering, bloodlusting derangement. It’s both a methodical neck-breaker and a mainline shot of delirium. There’s a roaring horror behind the mic and a blistering solo in this highly infectious piece of devilry as well.

“You Shall Bleed” blends similar ingredients to similar good effect, eating up the rails like a hellish freight train with big piston-driven riffs and then veering off the rails in bursts of lightning-fast insectile fretwork and head-hammering drum and bass bludgeoning.

Both songs are capable of dismantling your skeletal structure at the joints and then greedily sucking the marrow from your bones. They are also both viciously infectious. 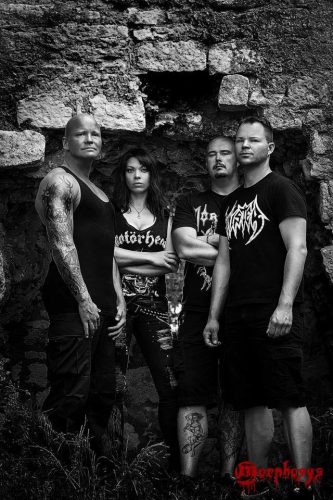 Shit, sorry about that, my brain is scrambled because “The Walking Dead” and “You Shall Bleed”!

Both songs are to be found on The Saw Is Family, which is the third album from the German death/thrash marauders in Morphosys. The album includes a cover of a track by Massacre (“Corpse Grinder”), which ought to fit right in. It will be released by Witches Brew on September 15. 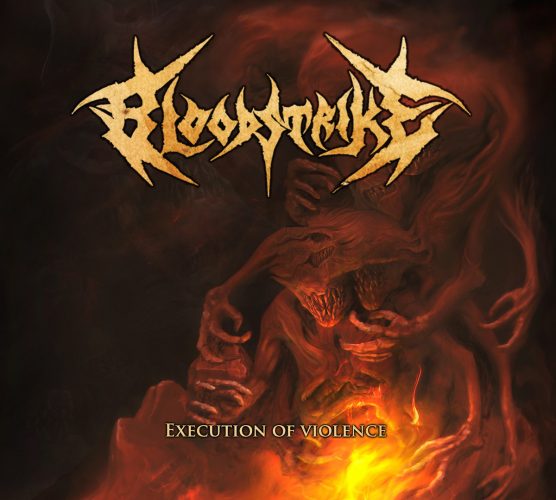 Massive, gut-churning guitar and bass tone have a lot to do with the visceral, old-school appeal of “Creeper“, but its hellish magnetism derives from other ingredients as well. The track begins in a gruesome, crawling… creep… segmented by brute-force drum pounding, and then it begins to steamroll ahead — if a steamroller could gallop as well as crush everything in its path into a fine powder.

There are still more shifts in rhythm and tempo ahead of that change, but no relenting in the bludgeoning, or in the atmosphere of pure paranormal horror (augmented by Holly Wedel’s nightmarish vocal excretions) or in the band’s iron grip on the listener’s throat. It’s as catchy as yersinia pestis and just as lethal.

I have a nagging feeling I’ve forgotten something again. 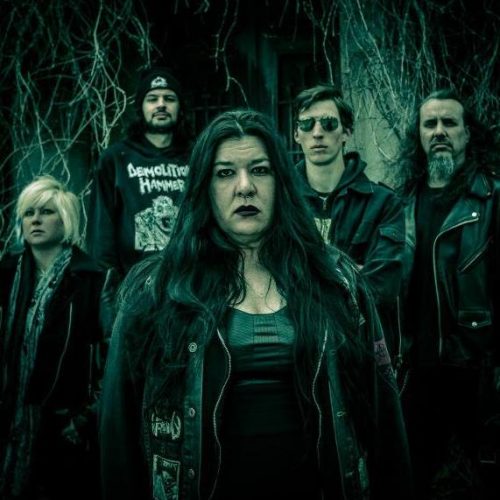 Oh wait, there it is. I knew if I sifted through the “Creeper“-inflicted wreckage of my mind long enough I would find it:

The song is an advance track from Execution of Violence, the second album by Colorado-based death metal barbarians Bloodstrike, who’ve been the subject of other garbled words of praise from yours truly in the past. It was mastered by none other than Dan Swanö at Unisound. The creepy cover art is by Andrzej Kuziola. It will be released on October 13 by Redefining Darkness Records. 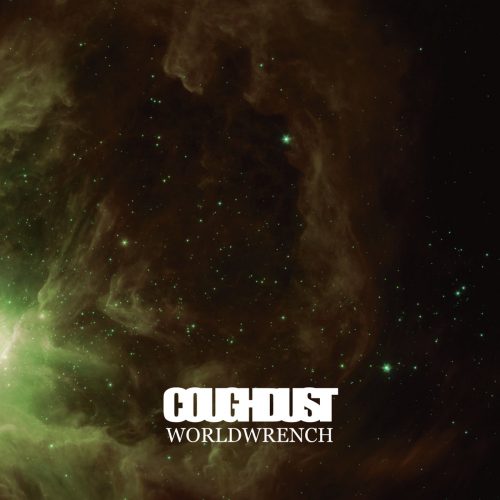 The last piece of slaughtering in this collection of music is a full album, but it’s one I’ve only begun to listen to. I probably would have made more headway except I needed a trip to the intensive care unit after the first track pounded my head into a slurry of bone fragments and brain jelly.

“Serpents of the Earth” is the name of that first track, and it’s as titanically crushing as anything I can remember hearing this year. Relentlessly bleak and murderous, the music just mercilessly pounds and pounds, with grotesquely distorted and stupefyingly heavy guitar and bass tone and drums you can feel in every internal organ.

If the music weren’t catastrophic enough, the vocals are the schizoid fragments of an incinerating mind, a mix of terrifying, tortured shrieks and monstrous roars. On top of all that, just after the four-minute mark, the lead guitarist executes an extended solo that is pure psychotic delirium, which happens at about the same time as the drummer launches into his own brutish frenzy.

This is both body- and mind-wrecking punishment of a very high order. The primary emotion evoked by the prospect of moving past the first song and listening to the rest of the album is… fear. 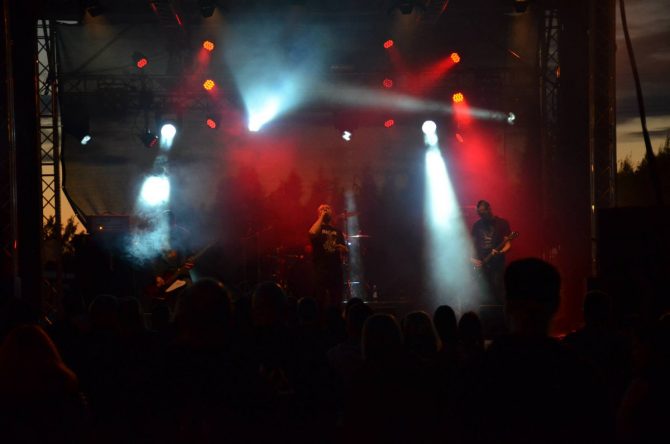 Okay, hope you enjoyed everything in here today, and… hold on… crap. Forgot something again. It’s hard to remember, given the brain trauma inflicted by this band. Could you remind me of my name?

“Serpents of the Earth” is the music of a Finnish demolition machine named Coughdust. It appears on their second album, Worldwrench, which was just released on September 1st and is available on Bandcamp.

(Thanks to Milos for sending me the link to this monstrosity.)