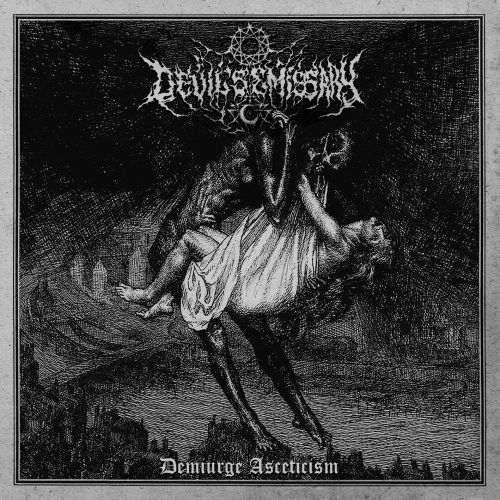 Offered in praise of the Harvester of Worlds, the great Swallower of Suns, the new EP by the Polish band Devil’s Emissary is a stunning amalgam of black and death metal that shocks and seduces in equal measures. It’s due for release on September 9 by Third Eye Temple, but we present a full stream of the EP today. Its name is Demiurge Asceticism.

This new three-song work follows the groups’s second album by two years, and reflects an evolution in sound, one in which staggering doses of heaviness have been blended with spine-shivering eruptions of black fury. The result is a changing pageant of armageddon-like chaos, pestilential doom, and blood-freezing grandeur, a tale of destruction and resurgence.

Where some hybrids of black and death metal devolve into storms of toxic murk and unrelenting warfare, Demiurge Asceticism is both rhythmically dynamic and intricately textured — though undeniably still very disturbing at its core.

The opener “Black Hole Meditation” provides a powerful introduction to the band’s shuddering strategies, launching the EP with deep, abrasive guitar grinding followed by an explosion of rumbling blast-beats and a poisonous blizzard of destructive riffing. The terror quotient is magnified by the appearance of bestial roars and maniacal shrieks as well as bursts of cataclysmic drum pounding and orgiastic guitar leads. But there are other dimensions to the unsettling darkness of the song. It slows to a stalking stomp — its huge, groaning bass notes infiltrated by high, eerie tones and buzzing guitar derangement — and it also latches onto a rocking beat with a hooky but deeply morbid riff and lashings of otherworldly melody.

The follow-on track “Transcendental Rite” is another display of rhythmic dynamics and the entwining of dissonance with haunting melody, but it’s also anchored and ultimately tied together by a lumbering, head-moving riff cloaked in a mantle of ominous threat. It surges forward in bursts of frenzied drumming and berserker guitar abrasion threaded with a queasy guitar lead, and still further changes lie ahead, including a dirge-like paean to dismantling grief and a battering war assault that’s both obliterating and electrifying.

As the closing track “Horizon Temple” proves, there are no weak spots on this EP. Blasting and brutally grim in its opening, it moves into a titanic stomp laced with a deep, unearthly, buzzing melody. And the band once again demonstrate their capacity to exude an aura of preternatural darkness through the incorporation of a stately, ritualistic processional whose mountainous central riff is both oppressive and frightening. They eventually blow away that sense of frigid stateliness with a torrent of blasting drums and a violent haze of guitar poison, but change again into a slow, head-moving, rocking gait before a final surge of chilling fury.

In a nutshell, this EP is a riveting experience from beginning to end, and one we recommend highly.

Demiurge Asceticism will be released in CD format by Third Eye Temple on September 9.

4 Responses to “AN NCS EP PREMIERE (AND A REVIEW): DEVIL’S EMISSARY — “DEMIURGE ASCETICISM””