I latched on to the music of Acephalix back in 2010 after discovering their Interminable Night demo and have been greedily following their output ever since, though I began fretting over the years of silence that followed 2012’s masterful Deathless Master. But then they reappeared on stage in the summer of 2015, and I eagerly made the trip to Portland the following February to see them perform at Famine Fest.

I had some inkling of what I was in for before Acephalix played, but I’m not sure anything could have prepared me for the reality of it. It was like being caught up in the midst of a tumultuous force of nature. I transformed from a merely drooling fan to a rabid fanatic, with the rabies strengthening to poisonous dominance in my organs after witnessing their explosive stage show twice more since then.

And so I confess I’ve been panting hard over the prospect of their new album, Decreation, which will soon be released by 20 Buck Spin. And while it’s conceivable that I’ve thrown my own objectivity into serious question already, I must say… it’s the best of Acephalix yet… and that puts it very high on the list of the best death metal albums you’ll find this year. 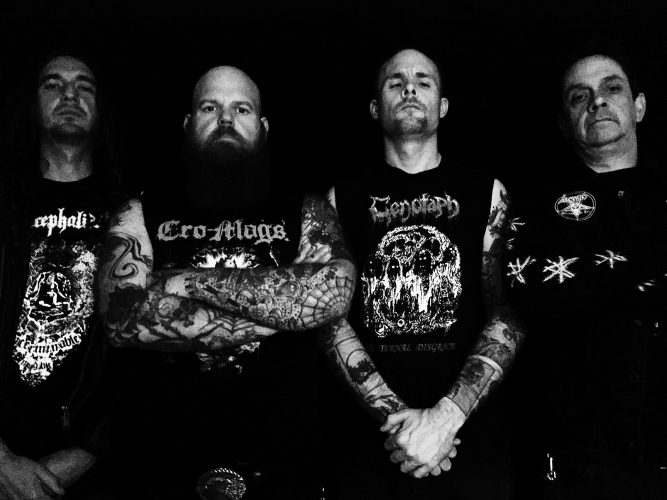 I could hardly be happier over the opportunity to present the premiere of a song from Decreation, especially because the track’s name is “Excremental Offerings.” And lest you misunderstand the meaning of the title (this isn’t shit… though it is great shit), here’s a comment by the band’s ultra-magnetic frontman Dan Butler:

“‘Excremental Offerings‘ is about our ambivalent relationship to the shit we carry around inside of us and how we’d rather rot internally before we show other people the shittiest – or the most true, the most real – manifestations of who we are.

“There’s a terror of emptiness motivating our spiritual constipation, and the excremental offering is the moment when we surrender to this terror at our core. While this is my best explanation of the lyrical themes, it’s really just another death metal song about death”.

Well, with appreciation for humility, no, I beg to differ. This isn’t just another death metal song, as you’ll soon discover. 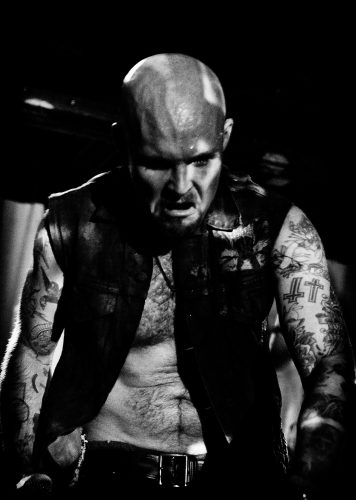 When I re-read my review of Interminable Night, I found that it still seemed relevant to the music of Acephalix even now:

“Catastrophic death metal really doesn’t need any bells and whistles to achieve its primal effect. Down-tune the guitars and set them spinning and belching out toxic clouds of oily smoke; load up the drums with full belts of high-caliber ammo and pull all the way back on the trigger to spray the landscape with full-auto, d-beat destruction; chain a bear to the ground and then taunt him until he’s in full-throated, pissed-off, roaring mode; then set the whole thing on fire so you get the right level of energy from the performers, and you’re good to go. That’s the winning formula of Acephalix.

“But Acephalix doesn’t stop there. They’ve added bells and whistles, too, and that makes them stand out just as much as the brute authenticity of their Dismember-worshipping, old-school attack: brief but well-placed gouts of reverb-effected guitar solos, mortar-blast pounding from the drums that explode amidst the rock rhythms and d-beats, and crawling bits of death-doom to remind you that ‘hope’ is a foreign word in the Acephalix lexicon.”

And then came Deathless Master, and Acephalix stepped into another zone. As I wrote then, Deathless Master was even more massive than what had come before, even more steeped in the corpse-strewn wastelands of stripped-down, smoke-belching death metal. On this album, Acephalix dug a mass grave, salted it with sulfur, and beckoned you to take the plunge. 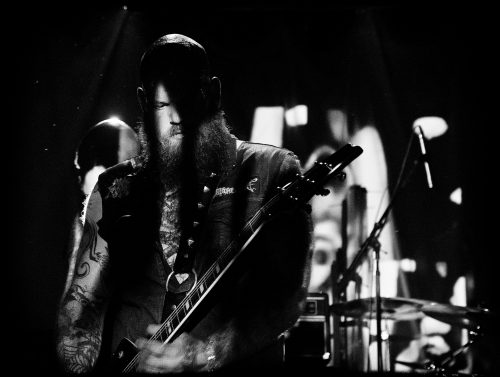 And now they’re back, with a vengeance — Butler up front, Kyle House on guitar, Luca on bass, and Dave Benson manning the drums, a line-up that shares members with Vastum, Necrot, Depressor, and more. And you might pray to a deity for mercy, but you’ll get none from Acephalix on Decreation. I mean, other than the fact that their music is just about the most wicked fun you can have while still fully clothed.

“Suffer (Life In Fragments)”, the first advance track from the album, is death metal romping and ravaging of a high order, brutish in its plundering and also poisonously seething, but including the kind of scampering punk/crust rhythms that are sure to ignite the pit — which is something Acephalix do with a sure and calculated hand.

“God Is Laughing“, which emerged next, is no laughing matter either. It is both cold and cutting enough to curdle blood in the veins and so head-hammering that you may lose some inches of height listening to it. And it chugs like a big demon freight train, so damned body-convulsing that it’s guaranteed to produce spasms of movement in the normal red-blooded listener. I feel like bowing down before the solo in that song, too. 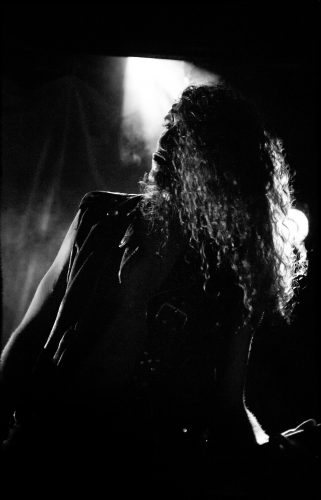 And now we have “Excremental Offerings“, possibly my favorite of these three pre-release tracks. This brutish mid-paced song’s massive, chugging, central riff is just pure gold. You may think you’re a modern human living in the 21st Century, but this baby will remind you that you’re a rutting caveman deep down where it counts. And when the song kicks into rampaging gear, it becomes high-octane mosh fuel — not one whit less infectious than what came before, but more electrifying. Because this is Acephalix, they also toss in a surprising guitar solo… except I guess I just sort of ruined the surprise.

What’s not surprising is Dan Butler’s one-of-a-kind roar, the cavernous sound of a heartless monster on the loose, which never fails to put the terror of death as a looming, lurching, hungry presence in the band’s music, almost regardless of what else is going on around it. 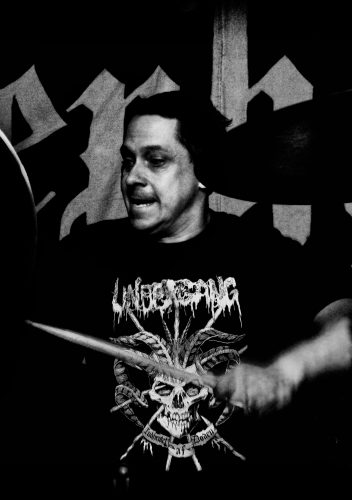 20 Buck Spin will release Decreation on CD and digital formats on September 22nd. A vinyl LP edition is expected a few weeks later, and Sentient Ruin will also be releasing a cassette tape edition. If you know what’s good for you, you’ll pre-order it now: