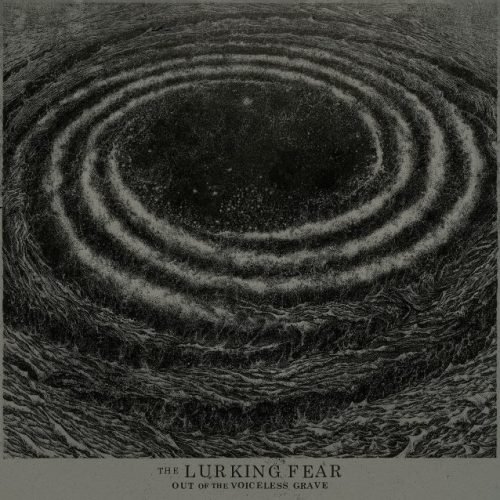 (TheMadIsraeli prepared this review of the debut album by Sweden’s The Lurking Fear, released on August 11 by Century Media.)

Let’s revisit what Swedish death metal royalty group The Lurking Fear had to say when they announced their formation:

“We want our Death Metal ugly, twisted and possessed. We miss the urgency, intensity and ‘realness’ in a lot of the modern Death Metal, therefore it is natural for us to stray away from the streamlined sounds of today, but rather focus on bringing sheer, natural weirdness and horror back to the table…””

This band has a ton of prestige-level pedigree behind it. Besides being fronted by Tomas Lindberg, the king of the mid-range vomitus bark, the members have history in bands such as The Crown, Edge Of Sanity, Marduk, Cradle Of Filth, God Macabre — the list is fucking long. I also appreciate very much TLF’s mission statement because I agree that death metal nowadays is very much lacking the urgency, intensity, and realness it speaks of. I’ve reviewed, and others here have reviewed, plenty of exceptions to this rule of course — our site thrives on the deathly arts — but trust me that what we give praise to here is a baffling minority. 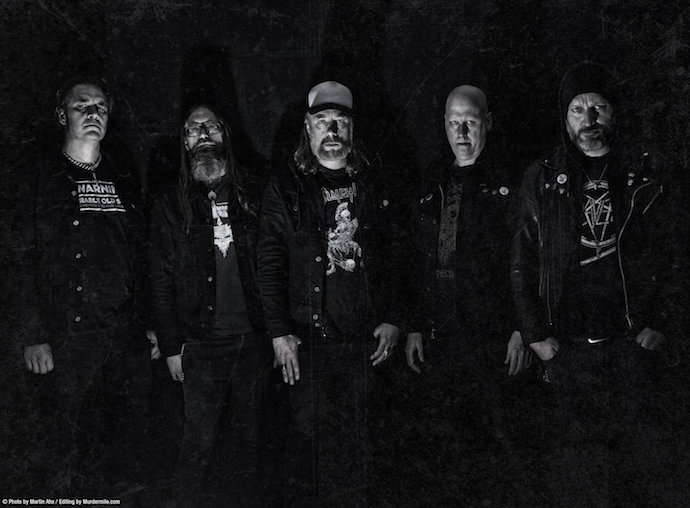 The Lurking Fear have released a titanic tome of black fire and forbidden knowledge in the form of Out Of The Voiceless Grave that is fresh, invigorated, and passionate, while channeling the primal exploratory spirit of the old school European death metal landscape. It brings classic legacy buzz-saw guitars, bleak riffs, pile-driving grooves, and the kind of speed that emulates a combat high, supported by a new-age ferocity and panicked, desperate awareness thats befits the state of affairs in the world today. We often dismiss Lovecraftian-themed metal as being a gimmick now, one that’s often associated with atmospheric, more plodding death metal that only sometimes pans out, but The Lurking Fear capture the actual fear and terror that the Lovecraftian lyrical content should inspire.

As goes for any Lindberg project, his vocals are undeniably one of the best things about this band. He is one of the few vocalists in metal who’s consistently gotten better as he’s gotten older, only sounding more feral and sub-human as the years roll on. Moreover, the music of The Lurking Fear sounds like a culmination of all the major band names associated with the project, with the intensity turned up to 11. There’s some At The Gates, The Haunted, The Crown, and a good dose of respect for the Swedish legacy of bands like Dismember all tied together with a very grindy sense of chaos and looseness. While death metal is definitively the foundation upon which the music on Out of The Voiceless Grave is built, it’s death metal, black metal, thrash metal, and a bit grindcore all in one. A typical legacy-sound tribute album this is not.

As a guitarist myself, I do have an unhealthy tendency to judge metal only by its riffs (although I think there’s a good argument why that’s MOSTLY what matters), but my obsession aside, the riffs on this album are fucking stellar. The Lurking Fear mixes melodic and angular tendencies quite often. The main riff of “Vortex Spawn”, the album’s opener, is a good example of this. Same goes for the song right after, “The Starving Gods Of Old”. Other songs like “Upon Black Winds” offer hooky death-thrash madness with a chorus riff/lead that sounds like true unbridled psychosis, contrasting straight-forward melodic and memorable tendencies with a section of absolute filth and disregard for that same melody. The contrast is quite beautiful really.

This album also has in its favor of course the fact that it’s fast as fuck. Fast as fuck is usually my speed, and when The Lurking Fear do it you can FEEL the panic in their sound. The only time they deviate is when the closing track “Menacing Sands” enters with its skeleton-grinding battle-tank groove that just crushes everything in its path. It’s part human-consuming lawnmower, but also part doom ballad. It’s a perfect end, and a genius sudden flipping of the sound on its head.

While some will, incorrectly I think, be disappointed with this project because they won’t be able to look beyond the old school death metal direction, The Lurking Fear in my mind have delivered the best album in this style that will exist all year. It pays just enough heed to the legacy of old while using modern stylistic blending and riff concepts to differentiate itself in a big way that hasn’t really happened since Hail Of Bullets (R.I.P). This is what death metal is all about to me. Out Of The Voiceless Grave is bleak, feral, full of terror and adrenaline, and a definitive monument of the spirit of uncompromised, heartfelt, and human death metal.

5 Responses to “THE LURKING FEAR: “OUT OF THE VOICELESS GRAVE””