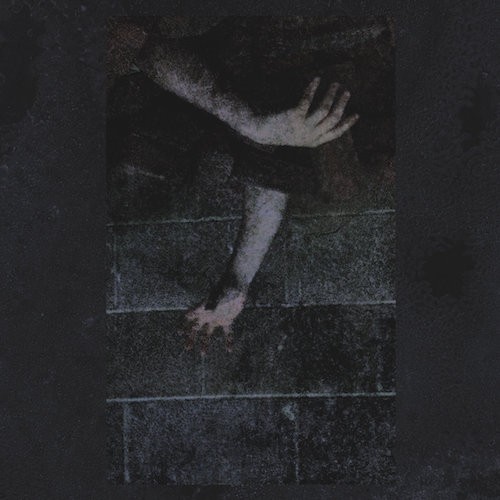 The two members of Calques live about three hours away in Montgomery, Alabama, but I’m guessing they didn’t make the drive for that rally. “All you get from Calques,” according to the Sentient Ruin label, “is the misery and oppression, the shortcomings, the failures, the ugliness, and the unappealing blight of the southern reality vomited on you through a swarm of shattered glass, mangled nerves, and razor wire.” 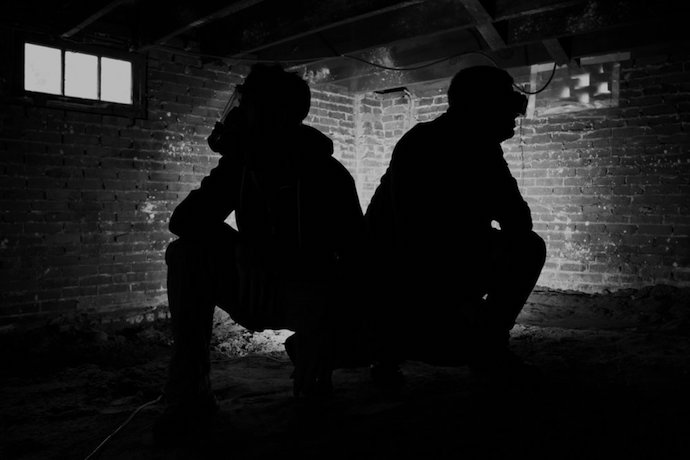 The members of Calques come from the bands Hadals and Japanese Women. Their debut release is Civilizing. The song below is “Galvanization“, a name that accurately describes what it does.

The label describes the music as “lo-fi black metal filtered through lurid and demented noise rock riffs and a vile shroud of harsh noise”, which is all true. But I would add that “Galvanization” is a hammering head-mover — at first — and then it devolves into a catastrophic dirge laced with psychoactive guitar machinations, which sound sort of like a child crying or a banshee moaning. More head-hammering follows, and then the nerve-mangling terror begins in earnest.

Civilizing will be released by Sentient Ruin on November 1. 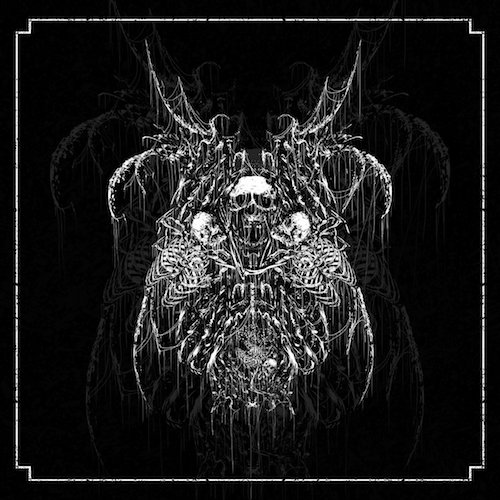 What you’ll hear is a very capable rush of death/thrash — ferocious, convulsive, galvanizing music with maniacal vocals and guitar leads that also sound unhinged. The band also succeed in making the music sound as evil as the walking dead, especially when they ease up on the accelerator near the end. 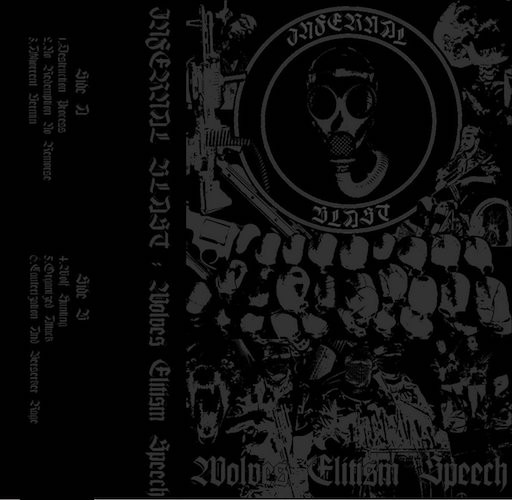 Infernal Blast is sure as hell an infernal blast, as revealed on this next song, which is appropriately named “Destruction Process“. It comes from this French one-man band’s 18-minute debut EP, Wolves Elitism Speech.

“Destruction Process” is undeniably obliterating and remorseless. The programmed drums alone are enough to roll the eyes back in your head, and when combined with the jackhammering pulse of the bass, they produce the kind of delicious trauma that causes drooling. And with that furious drive train hammering like an overheating engine, Infernal Blast unleashes a torrent of vicious, corrosive riffing and mad, howling vocal incineration. The effect is electrifying.

Wolves Elitism Speech is being released by War Arts Productions and can be ordered on Bandcamp now. 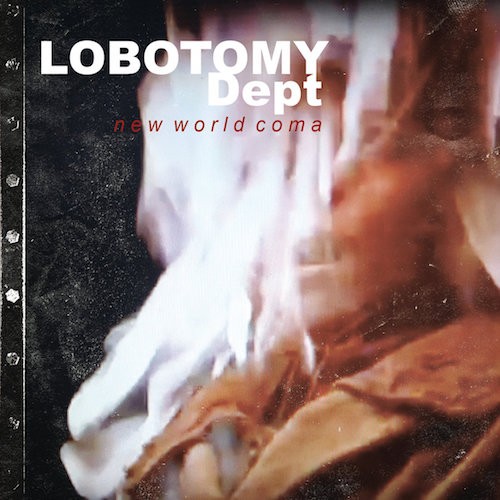 Did you know that Lasse Pyykkö (Hooded Menace) and Rogga Johansson (Paganizer, Ribspreader, etc., etc.) share an interest in industrial metal from the late ’80s and early ’90s? I didn’t, even though I might have guessed if I’d thought about Rogga’s Terminal Grip endeavors and some of the experimentation in Phlegethon’s releases from the early ’90s, but that shared interest has led them to collaborate in Lobotomy Department.

This new project’s debut effort is an EP named New World Coma, which was released on September 7 by Selfmadegod Records. It definitely has an old-school industrial metal core, spattered with bits of electronic skittering and vocal samples, but that core is entwined with death metal, thrash, and psychedelia as well.

Dismal and dissonant guitar leads float and twist through the music like vaporous apparitions; the distorted, warped vocals sound like the hateful vituperations of a madman; the pacing moves from the highly addictive, jackhammering rush of “Endtimer” to the more mid-paced and ominous stomping, jabbing, and chugging of “Controller Breeder”, followed by the methodical demolition work of “Epitome” and the thrashing lightening ride of “Cold Rising”.

Sitting still when listening to this is not an option.

People with eggshell skulls should shy away from it, too. 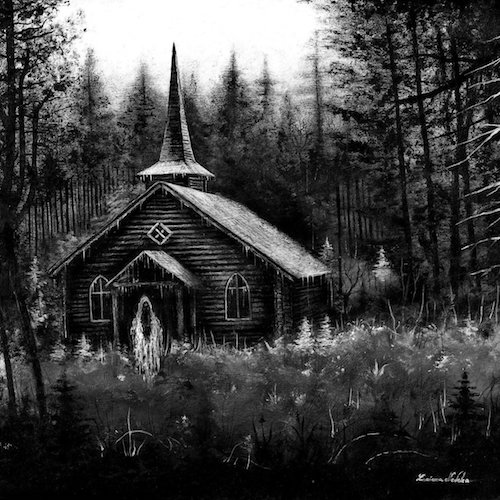 Five Suns, the debut album by Shroud Ritual, is a marvel of musical amalgamation, a hugely impressive instrumental hybrid of progressive, technical, black, and death metal. One commenter on the Bandcamp page for the album suggests, “think Opeth taken to the extreme”. But as the same commenter notes, “this easily retains its own flavor”.

I’ll limit by own remarks to the first song set to play on Bandcamp, “Celestial Dome“. You may be lulled and entranced by the brief piano intro to the song, but you’ll then be carried aloft on a roller coaster ride given wings. The song has a jolting physicality as well as a shimmering intangibility. There are murderous jabbing and seething riffs here, but also a jazz-like guitar duet (with one of them quavering like a saxophone), beautiful fluid soloing, a flickering guitar instrumental that’s mesmerizing, acoustic strumming, and a bass solo that’s equally seductive. I don’t know if the drumwork is programmed or human, but it’s fantastic.

All of this is remarkable, and so is the rest of the album, and what makes the achievements all the more impressive is that Shroud Ritual is the work of a lone gunman, one Patrick H. from Washington, DC. The album was released on September 21 and includes cover art by the great Luciana Nedelea.

(Thanks again to Miloš for linking me to this release.) 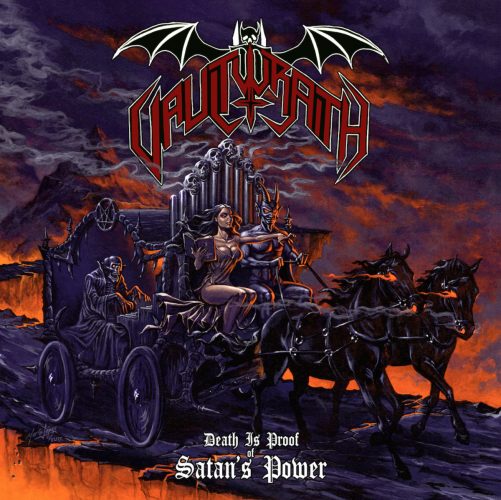 I’m approaching the nether reaches of the alphabet in this Saturday playlist with a track called “The Vaultwraith” by a Missouri quartet named Vaultwraith, who have taken guidance from the likes of Mercyful Fate and Bathory. It comes from their debut album, Death Is Proof Of Satan’s Power.

Rhythmically, this first advance track is a huge headbanger, but it swings and swirls, too. Classic, brooding heavy metal riffs trade places with gliding, panoramic melodies and melancholy guitar leads. The vocals are downright bestial, partly the proclamations of an infernal tyranny and partly the feeding frenzy of a mad carnivore. This is a sinister delight.

Death Is Proof of Satan’s Power will be released by Hells Headbangers on October 30. 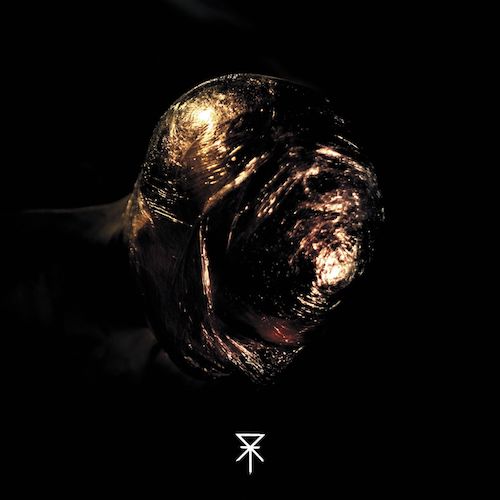 The final item in this collection comes in the form of a video, which rivets the attention as much as the song. And the song is damned riveting by itself.

This track is “Violence Is Seduction” from a new album named The Atrocity Reports by the sludgy industrial/post-metal band Wheelfall from France. The music here is thoroughly bleak, and it just as thoroughly seizes control of the fast-twitch reflexes in your muscles; your body will want to move to it, even though it hits heavy and hard enough to rupture organs.

There’s something else I like about the song: The vocalist has a furious, bleeding raw voice, and when he screams at me, “Brace Up You Fucker!“, I want to brace up. We all need to brace up. The world is insane.

If you like what you hear (and why the hell wouldn’t you?) you can check out a previous video for “The Way to Every Crime is Ours“, which is probably best considered NSFW (due to gore and scenes of extreme violence inflicted on a bound and helpless victim).

The Atrocity Reports will be released by Apathia Records on October 6.