As we near the year’s final quarter and thoughts begin turning to end-of-year lists amid a mad rush through the fall and winter holidays, we should still keep our eyes peeled for new releases, and the one that’s the subject of this post shows signs of being one of the final quarter’s best surprises — the debut album of Cryptic Fog, which will be released by Sweden’s Blood Harvest Records on October 27.

At the time of this recording, Cryptic Fog was a two-man operation based in the U.S. midwest consisting of guitarist/bassist Dave Bennett and drummer/vocalist Dan Klein. The name of the album is Staring Through the Veil. 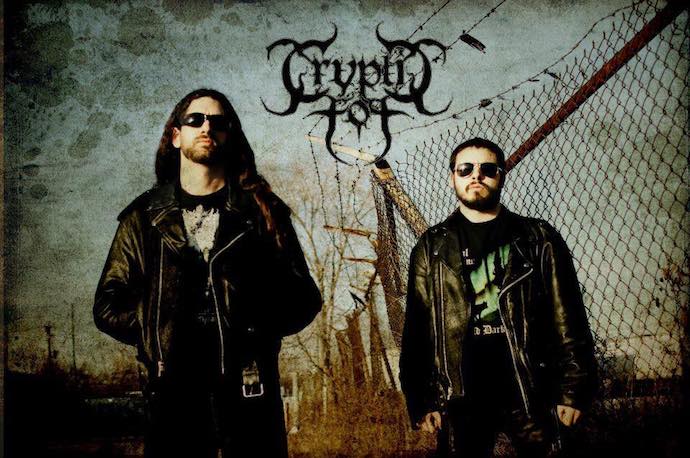 My own first exposure to their music was the new album’s first single, “Cleansed By the Black Flame of Absolution“, a nearly 12-minute song that proved to be a serious eye-opener. Nearly relentless in its headlong, turbocharged rush, it’s amazingly catchy for such a long and brain-twisting piece of death metal. Warlike and intense, jolting and swirling, loaded with blast-beats and fusillades of double-bass, it also includes bursts of crazed, dissonant melody, blazing chords, and lots of frenzied fretwork. The vocals on the track are almost as kaleidoscopic as the music, a mix of monstrous, reverberating growls, horrific roars, and inflamed clean vocals, which are gritty and also soaring.

The song we’re presenting today is the album’s opening track, “The Grand Berator Walks Amongst the Hall of Misery“. At nearly 9 minutes, it’s not as long as the first single but still substantial, just as imaginative, and equally memorable. The main riff that runs through most of the song (with some maniacal digressions along the way) pulsates like some kind of hellish fanfare, a corrosive chorus of horns announcing the mortification in fire of a new batch of condemned souls. You hear it right from the beginning, blaring above a torrent of rumbling double-bass and blasting snare beats and accompanied by a solo that’s a mad freakout (there’s another one near the end).

That riff hammers itself into your head, but those digressions I mentioned are just as riveting, delivering eruptions of rumbling, swarming, and ravaging, and eventually boiling over, with the guitar flickering in an insectile frenzy. The song reveals impressive technicality, with everyone moving (except for a few brooding breaks) at a high rate of pulse-pounding speed. Those vocals remain just as blood-curdling as in the previous single.

Blood Harvest will released the album on CD, vinyl LP, and cassette tape. Do not let this one get lost in the rush toward the end of the year.

2 Responses to “AN NCS PREMIERE: CRYPTIC FOG — “THE GRAND BERATOR WALKS AMONGST THE HALL OF MISERY””