(Andy Synn presents the 89th edition of THE SYNN REPORT, and on this occasion reviews the collected discography of Ingurgitating Oblivion from Germany.)

One of the great joys of the modern Death Metal scene is the sheer variety of different forms and flavours available to tantalise our musical taste buds. These days if you’re not enjoying what you’re currently being fed it’s barely the work of a moment to find something else to dig your teeth into.

The subject of this month’s edition of The Synn Report, Germany’s own Ingurgitating Oblivion, have been plying their trade in the murky sub-corner of Dissonant/Atmospheric Death Metal since 2001, and have produced three increasingly fearsome full-length albums in the years since then, the most recent of which, Vision Wallows in Symphonies of Light, was released in April of this year. 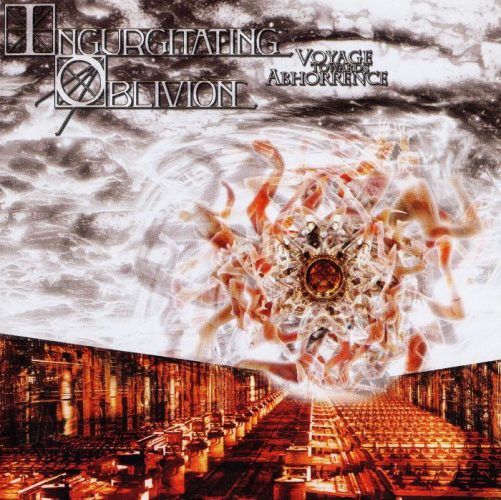 The band’s debut album slithers into your eardrums with the unnerving strains of “Unfolding” before detonating in the explosion of mangled, lurching riffs and jolting, jarring drums that is “Spiralling Out of the World”.

Over almost as soon as it began, “Spiralling…” quickly gives way to the spiky, blast-fuelled assault of “Veil of Perception”, whose pulse-pounding aggression and neck-snapping technicality actually conceal some surprisingly sharp hooks and sickening pseudo-melodies designed to infiltrate and insinuate themselves deep into your brain.

“Nothingness” is a chugging, churning, blasting bombardment of thick, meaty Death Metal riffs and ugly, nauseating rhythms in the vein of classic Morbid Angel that’s more than capable of going toe-to-toe and round-for-round with its more famous forebears, as is the more dissonant “Poetry of the Flesh” which trades heaving hooks for devastating discordance.

“Towards the Flickering Light” is just under two and a half minutes of groaning, slime-drenched riffs and bone-rattling drum work that serves as a primer for the titanic “Waters of Rebirth”, whose massive, bludgeoning guitars, filthy, bowel-shaking vocals, and wild, strafing drums all combine into one of the albums harshest and heaviest tracks (and that’s really saying something considering how unremittingly heavy the eight tracks which make up Voyage… are).

At just under eight minutes long (despite what Metal Archives might tell you), closing track “Imprecations” is certainly the most ambitious and angular piece of work (as well as a harbinger of things to come) on the entire album, dragging listeners through a blood-drenched and sharp-toothed soundscape of gritty, grinding riffs and grisly, guttural vocals, all underpinned by the sort of rampant, riot-inducing drum work that somehow seems simultaneously both completely calculated and yet sickeningly spontaneous at the same time.

In many ways this mix of seeming randomness and premeditated precision recalls Dying Fetus at their most murderous and malevolent, and although not as overly and ostentatiously technical as Gallagher and co. are, Ingurgitating Oblivion demonstrate a similar fetish for sudden, neck-wrecking shifts in direction and dynamic, layering on riff after riff after riff until the song is in danger of completely collapsing under its own weight, before suddenly dissipating into eerie nothingness, subverting expectations and leaving the audience bereft of any sense of comforting closure or resolution.

Sadly I was unable to find a Bandcamp stream for this album, so you’ll just have to settle for the YouTube embed of “Nothingness” below. 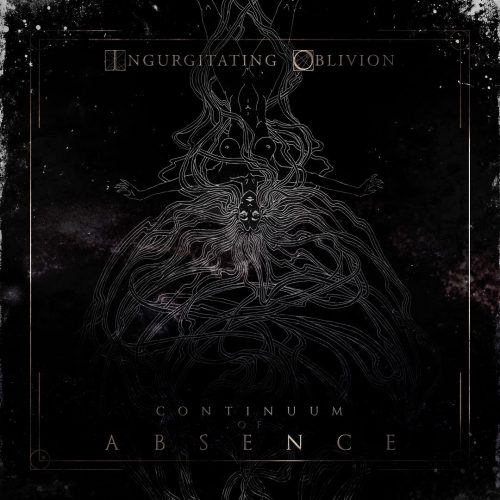 The shadowy, shapeless introduction to “Eternal Quiescence”, the opening track from the band’s second album, may initially bring to mind images of an endless, lightless void, but this bleak, barren nothingness is soon shattered by an eruption of clattering, off-kilter riffs and writhing, spasming drums that seem to push and pull and strain against one another, establishing a humongous groove only to smash it to shards moments later.

The second half of the track finds the band’s Gorguts-meets-Immolation assault upon the senses really coalescing into something truly ominous and oppressive, all brutal riffage, cantankerous bass work, and grim, infectious vocals that ask no quarter, and give none in return.

Having already stepped their game up significantly from their debut, the quintet (as they were at this point) continue to unleash superior sonic hell with the blast-driven, whiplash-inducing “Antinomian Rites”, which mixes cacophonous metallic punishment with an aura of pure, predatory malice, after which the atonal, anxiety-inducing strains of the Immolation-esque “Burden of Recurrence” do their very best to scar and scorch your eardrums beyond repair.

The sheer sense of weight, the bone-breaking gravity, generated by “Descent To The Temple” is absolutely crushing, and, as the riffs begin to pile up like creaking slabs of mangled metallic wreckage, the atmosphere of the track steadily becomes thicker, darker, and more claustrophobic, slowly developing into an almost physical presence that presses in on your lungs, making it harder and harder to breathe.

“Avatar of Radiating Absence” picks up the baton from Coloured Sands-era Gorguts (which was released a little over a year before) and runs with it down labyrinthine corridors of tangled, tormented riffage and deathly, disorienting rhythms, underpinned by some disgustingly intense bass and drum work, followed in quick succession by the utterly uncompromising “Offering”, which sounds a little bit like someone decided to throw all the members of Ulcerate down a flight of crumbling concrete stairs, and record the resultant catastrophe.

Concluding with the suitably stupefying sounds of “Stupendous, Featureless, Still” – a little under eight minutes of doomy dissonance and Tech/Prog discordance topped off with a visceral litany of gruesome growling vocals and hulking, hammering drums – it’s no surprise that Continuum of Absence was the album which broke the band through to a much bigger audience, as every tracks hits you with the devastating momentum of a runaway freight train. 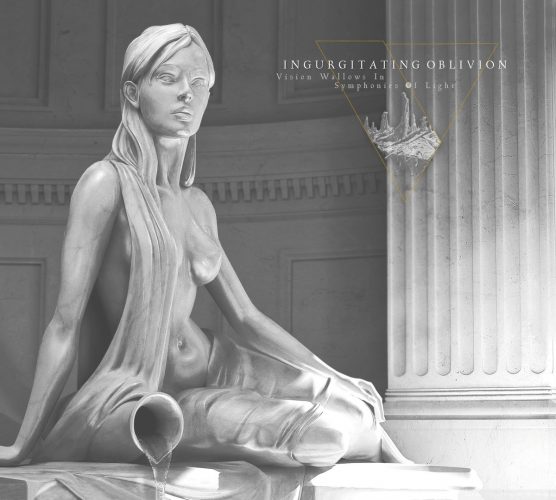 VISION WALLOWS IN SYMPHONIES OF LIGHT – 2017

Pushing the unorthodox, purposefully progressive, side of their sound even further, the band’s third album is their most ambitious, most complex, and most willfully difficult yet, featuring four extravagantly long compositions that find the group at their most abrasively artistic.

Not that you’d initially know it from opener “Amid the Offal, Abide With Me” which, after a short section of menacing ambience, unleashes itself upon your ears in a maelstrom of apocalyptic audio aggression, passages of Destroyers of All level heaviness interspersed with moments of malignant atmosphere and dark, distorted melody.

Track two however is where you really see things start to change, transitioning from the uncanny ethereal outro of “Amid the Offal…” into the sinister vibes of the twenty-three (!) minute “A Mote Constitutes What to Me Is Not All, and Eternally All, Is Nothing”, the band’s most OTT and out-there­ composition to date.

From a lengthy and unearthly ambient intro, punctuated by the unsettling, off-kilter drumming of Lille Gruber (Defeated Sanity) the track metamorphoses into a brutalising bombardment of writhing riffs and nauseating rhythms, swelling and surging, coiling and cohering, in strange, unpredictable patterns that collapse into chaos just when you think you have a firm grasp on them, before eventually concluding in another disconcerting deviation into jarring, jazzy ambience and abstract auditory hallucinations.

The title track is a (relatively) more straightforward affair, though it leans much harder on the Gorguts side of the band’s influences than on the more “classic” Morbid Angel/Immolation end of the scale, what with its multiple clashing, purposefully disharmonious guitar lines and piercing, twanging bass lines that pop and snap like tendons being stretched beyond their breaking point.

It’s also probably worth mentioning that the vocals here, and on this album as a whole, are truly nasty, a roiling, vomitous stream of bowel-loosening brutality and punishing penetralia spitting forth a mixture of esoteric knowledge and semi-lucid dream-logic with little to no regard for the comfort or comprehension of the listener.

The whole monolithic monstrosity of an album concludes with “A Devourer of Flitting Shades Who Dwells in Rays of Light”, a suitably obscure and arcane final vision which, for the majority of its run-time, finds the band exploring a more purely ambient and atmospheric area of their sound, chiming and echoing with oddly disquieting notes of not-quite-melody and ringing, sharp-edged chords, only to purge itself in one climactic cataclysmic cacophony of sound and fury during its final minutes.

Definitely one for those who like their Death Metal a bit more on the cerebral side, but without losing that grim, gut-level impact, you can stream the whole disgusting affair below.

One Response to “THE SYNN REPORT, PART 89: INGURGITATING OBLIVION”