(We present DGR’s detailed review of the new album by Belphegor, which is out now on the Nuclear Blast label.)

You could be forgiven for thinking that at this point in their career Austria’s Belphegor would’ve been perfectly okay to rest on their laurels a bit. Having long ago established themselves as one of the more popular extreme black-metal-infused death metal acts out there, currently housed over at Nuclear Blast, and building a career draped in the worlds of blasphemy and a logo bearing prominent inverted crosses, Belphegor have defined themselves as one of the go-to groups for heavy metal’s dose of Satan.

Totenritual, the group’s eleventh album in a career spanning well over twenty years could’ve had the band serve up another smattering of heavier-than-the-Earth guitars and bellowing vocals, yet the Belphegor crew seem to have found new life in their chosen font of death and draw from it for the gathering on Totenritual. Totenritual does have its fair share of minor quirks, but overall Belphegor has honed in on a very focused sound — one which they hammer home numerous times over the nine songs that make up the disc. The album again shows the relic of subtlety (which Belphegor tossed a long time ago, in case albums titled Lucifer Incestus and Bondage Goat Zombie didn’t point you in the right direction) cast off in favor of nine tracks fueled by — and introduced numerous times by — the devil. 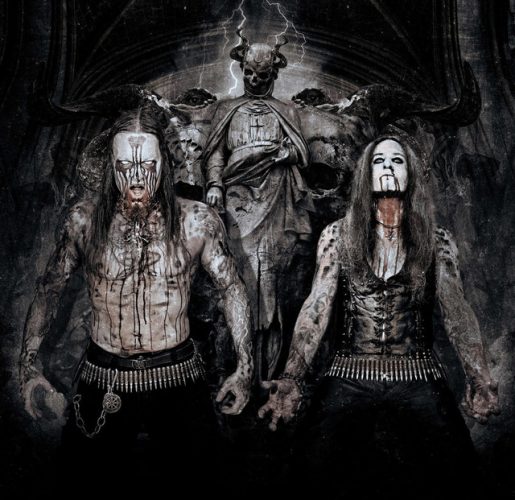 At first Totenritual seems like a collection of singles, one of those albums where every song is its own island, though that impression eventually changes. Its lead-off song is purposefully meat-headed in the way it lumbers around the room repeatedly yelling “Baphomet” before going for another blast run. From its first hefty guitar slide and crash, “Baphomet” is immediately recognizable amongst the annals of blackened death metal song-writing, a hulking beast of a song that pulls heavily from some well-defined tropes — especially familiar in Belphegor‘s brand of death metal — and is basically a signal flare sent up to let people know that Belphegor won’t be making too many changes overall, just honing an already immensely sharp blade.

What “Baphomet” does have, outside of a sense of sheer scale, is some layered guitar work that actually masks a few melodies (a theme overall in Totenritual) that can bore into one’s brain, long after you’ve wrapped up the disc. There’s even some fun cymbal-bell work as well, in between the relentless blast-beat runs that Belphegor use as one of their overall defining traits. The humongous wall of sound that Belphegor dish out runs through the entire disc, and songs like “Baphomet” find themselves resurrected in their own, monumentally thick fashion in songs like “Swinefever – Regent Of Pigs”, which itself features a fun closing back-half full of cymbal crashes and an almost imperial-march-closer of a lead riff.

Belphegor do manage to stun in a few ways on Totenritual though, one of which is when the band decide to kick up the tempo a notch and create some massive whirlwind headbanging anthems. Among those in the first bits of the album are “The Devil’s Son” and “Apophis – Black Dragon”.

“The Devil’s Son” serves as the blueprint for a handful of songs across Totenritual, as it’s the first time that the band use a sample of some form of Satanic possession, and it is also one of the faster songs on Totenritual. With “The Devil’s Son”, Belphegor lay the foundation for some of the speedier songs on Totenritual, including variations on some of the guitar leads used within that song. Granted, the festering pile of parts with which Belphegor choose to build their songs is purposefully limited (nothing avant-garde here) to basically the most low-tuned and beefy stuff they can find, so there’s going to be a handful of times on any disc when the band gleefully trample over themselves. 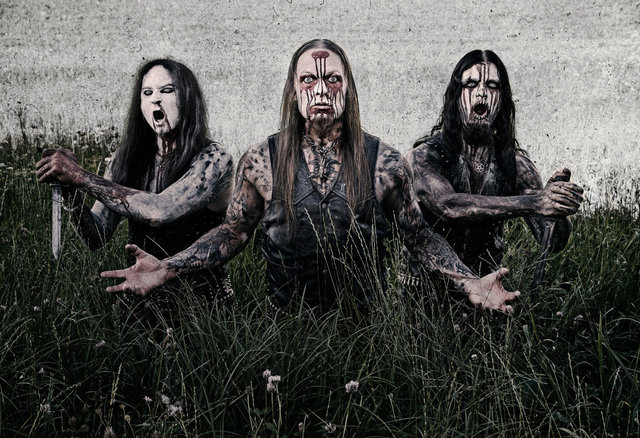 “Apophis – Black Dragon” should be a little more familiar to people as it was one of the lead-off singles for Totenritual (alongside both “Baphomet” and “Totenkult – Exegesis of Deterioration”) and it remains one of the better tracks on the album. The chanted vocals, the quick-moving tempo, the hammering urgency with which Belphegor crank out that guitar lead and that pummeling chugging bit at the end all coalesce into one of the finer passages on Totenritual, and it also really helps to amplify the slow, lumbering act that was “Swinefever” before it.

The other aforementioned surprise on Totenritual happens at the halfway point, in which Totenritual begins to become something of a concept disc, where the band tie each song together with some very fine sinews, each track spilling into the next. The last four songs of Totenritual become something of a blackened death metal epic, beginning with the instrumental two-minute “Totenbeschwörer”, one of the few breathers on the album outside of one small acoustic break earlier on.

It is also in these last few songs that some of the best elements of Totenritual begin to surface as well. You could make a serious argument that “Spell Of Reflection” is one of the best songs on Totenritual, with its high-speed opener and multi-pronged vocal attack leading into one of the more pummeling segments heard on the disc (alongside “Apophis”). In fact, you could say those two in combination really help to elevate Totenritual beyond a solid collection of songs and into a generally great album. The lead guitar segment of “Spell Of Reflection” is infectious as hell and Belphegor keep returning to it, promising the listener another hit of the sweet, sweet guitar melody each time they pass by it.

The titular “Totenritual” song, though, needs to be mentioned, if not just because of how teeth-baringly abrasive it is. A lot of words have been dedicated over the years to the weight of naming an album after a particular song — what that represents, what it means for the disc as a whole, how the song is representative of that album, and here, what it means to use the song as your closing message for the whole disc.

Part of the reason why I enjoy this song’s nearly three minutes as much as I do is because it spills over from its predecessor “Embracing A Star” and is basically almost three minutes of apocalyptic blasting and inhuman yelling. The song itself is actually only about a minute and forty five seconds long and it almost never lets up — just an adrenaline rush, like Belphegor spilling over the edge of a maelstrom into madness. It does away with a lot of the death metal meat-tenderizing chug in favor of a non-stop, high-speed, high-guitar, high-scream black metal fest. The closing of the song is just a twenty-second scream of anguish alongside light guitar work and atmospherics. It’s a perfect bookend to what the band started four songs before when they began segueing them into one another. 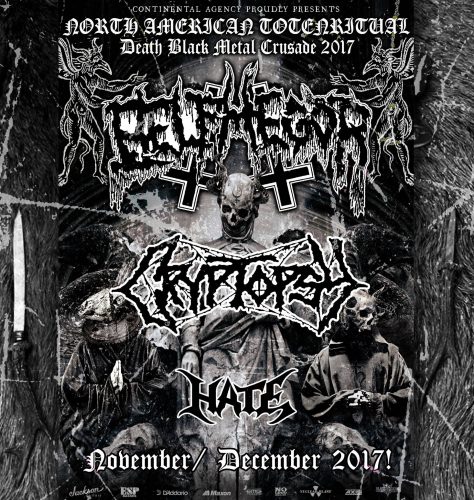 Belphegor find truth in the idea that in death is life, and manage to surprise with Totenritual. Instead of merely crafting a solid collection of songs, the band manage to leap beyond that and create a white-knuckled ride of an album. They get a ton of mileage out of going as fast and as blast-heavy as possible, never letting Totenritual slow down for too long. Every song has a moment or two of apocalyptic reverie within it, and the closing few songs of the album are hard to put down; once you hit the instrumental track, you almost feel compelled to stay through to the album’s end. The songs beforehand, while less thematically tied together, are giants in their own right, and although all pull from the Satanic blueprint that Belphegor inscribe within the first two songs of Totenritual, there’s enough variation among them that they never overstay their welcome.

At nine tracks, Totenritual is a welcome surprise from a band who’ve long honed their legacy into a formidable presence. It shows that, well into their career, Belphegor remain monsters who revel in the relentless speed of darkness.

One Response to “BELPHEGOR: “TOTENRITUAL””