(Here is Andy Synn’s review of the debut album by the Norwegian band Fleshkiller, which was released on September 15.)

It’s no great secret that a number of the NCS crew are fans of Extol, myself included.

So when it was announced (quietly) that the band were going back on hiatus, but that guitarist/songwriter Ole Børud would be continuing on in the same vein with his new project Fleshkiller I’ll admit that my feelings were somewhat mixed.

On the one hand the realisation that there wouldn’t be any more Extol for the foreseeable future (if ever) certainly stung but, at the same time, I was happy to know that Børud would be carrying on the band’s legacy by repurposing the riffs, melodies, and songs that had already been written into material for Awaken.

Because, and let’s be brutally honest here, his guitar work has always been probably the most defining element behind Extol’s sound, just as it is the driving force behind Fleshkiller. 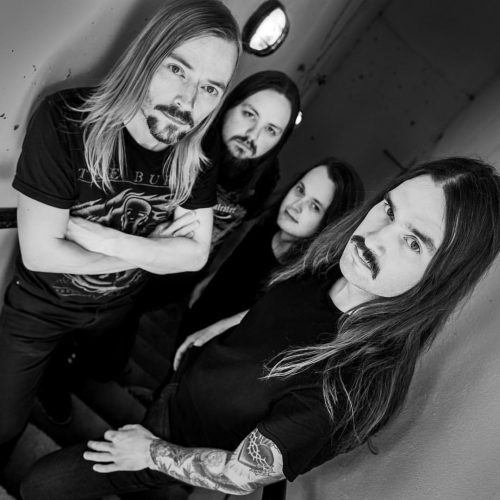 Saying that is in no way intended to downplay the vitally important role of David Husvik (drums) and Peter Espevoll (vocals) – or any of the band’s other members over the years – in crafting the signature Extol sound, but it’s readily apparent, even after only a single listen, that Fleshkiller is basically Extol 2.0 in all but name.

That being said, while Børud’s signature style of riffing and progtastic clean vocals are both present and correct, the songs themselves are markedly more aggressive and more overtly technical, and although the metallic snarl of vocalist/guitarist Elisha Mullins (The Burial, ex-A Hill To Die Upon) is, at times, an almost dead-ringer for Espevoll, his deviations into a deeper, more deathly delivery help hammer the point home that Awaken is more than just a rehash of old ideas.

Of course it’s impossible to escape the question of how this album might have sounded if it had been recorded and released under the Extol moniker. While it most likely would have been different in some aspects, there’s no way to tell exactly how different, or whether it would have been any better or any worse – particularly since Børud is the chief songwriter for both bands – but you shouldn’t let that tarnish your enjoyment of what is, when all is said and done, one extremely impressive collection of tracks.

Early stand-outs include shamelessly infectious opener “Parallel Kingdom”, the rifftastic grooves of “Wisdom”, and the punchy Prog-Metal powerhouse that is the title-track, but the band (rounded out by bassist Ole Vistnes and drummer Andreas Skorpe Sjøren) haven’t fallen into the trap of frontloading all their best material at the start, and the album’s second half plays host to a similar array of killer cuts, such as the frenetic “Evil Eclipse” and the explosive “Warfare”, before finally culminating in the spellbinding “Window of Time”.

What’s more even those tracks which don’t quite hit the same stratospheric heights, such as the burly “Secret Chambers” or the proggy-yet-punishing “Inherit”, are still more than worth the price of admission, and Børud in particular seems unwilling or unable to ever simply phone it in, flinging out rapid-fire riffs and fleet-fingered solos like a man very much in the grip of a creative renaissance.

In conclusion, depending on how you look at it, Awaken is either a more than worthy follow-up to one of the best comeback albums in recent memory, or a brilliantly put together debut from a new band that shows an almost obscene amount of promise.

Full album stream begins here
(and an official video is below, too):